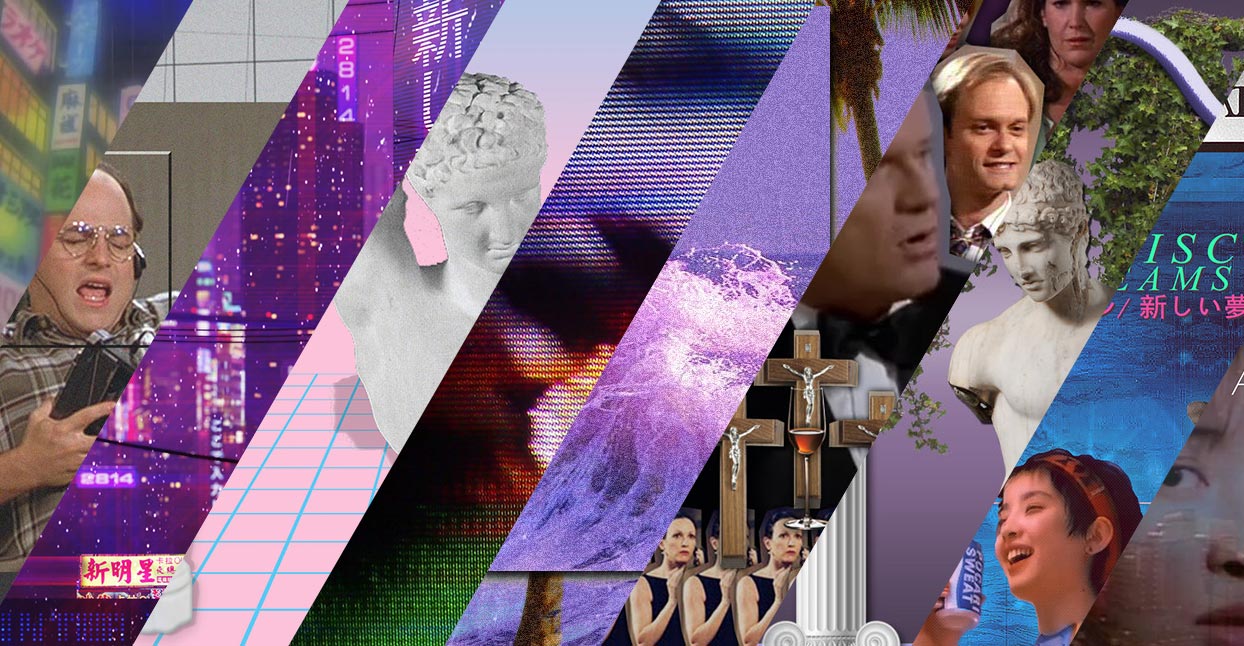 Every month, Simon Chandler offers insight into the ever expanding and changing genre of vaporwave.

Vaporwave is a strange and singular genre. Not just because many of its most celebrated albums revolve around sampling corporate muzak and aging pop hits, and not just because its practitioners remain mostly anonymous. It’s unique because its music is unusually inextricable from the cover art and imagery that accompanies it. Even more so than, say, metal or rap, vaporwave depends heavily on visuals in order to maintain its individuality as a musical form.

And yet, beyond offering newness and distinction where there are mainly appropriated samples and anonymous producers, the imagery of vaporwave draws upon a variety of themes. Whether it’s depictions of virtual plazas or neon-lit streets, vaporwave cover art doesn’t simply provide a psychedelic backdrop for the music of, say, Floral Shoppe or a Hong Kong Express. It also offers a deep window into the music’s central ideas and concerns, helping to substantiate everything from the genre’s critique of consumerism to its notion that society has locked itself in a nostalgic, media-generated bubble. In honor of vaporwave’s status as a visual medium, we’ve gathered up nine of the genre’s defining visual motifs.

If there’s one theme that distinguishes the cover art and visual aesthetics of vaporwave from other genres, it’s the depiction of the modern indoor shopping center. Most vividly represented in the output of 猫 シ Corp. and モールFUTURE/PAST, malls are depicted as perfect, almost heavenly spaces, with glistening marble surfaces and white staircases that seem to rise to infinity. If nothing else, these images of perfection and infinity evoke the sense that consumer society can give the individual everything they want or need, without setting any limits on their desires. And yet, since the images are often computer-generated and artificial, the virtual plazas illustrated on the cover of Nyetscape 4 and Vacant Places also suggest that this sense of limitlessness is a fantasy.

Unreality might be the thread that links all of vaporwave aesthetics, since another prevalent visual motif is that of the computer game. It’s important to note that the iconography mined by albums like Eccojams, New Dreams Ltd. or Amiga-Tech never belong to contemporary, state-of-the-art consoles. It’s always vintage systems, like the Game Boy or Sega Saturn, suggesting that vaporwave artists are less interested in computer games per se, and more in the aura of nostalgia they radiate. As hinted by the cover art of such albums as Dream and Welcome to Warp Zone, they often encourage listeners to regress to their carefree childhoods—and, in the process, escape from a much less idyllic reality.

Escapism can also be seen as a reason why vaporwave leans so heavily on Japanese and Asian imagery. The trope is not without its problems: often, vaporwave’s dependence on Asian characters can be seen as coming dangerously close to fetishizing the Other. There’s also a tendency to depict Asian people (almost always women) against an abstracted, sometimes hypnagogic background, replacing their humanity with an image or dream of something that is, once again, just a little too perfect. In doing this, albums like July and evening bliss tread close to committing what Edward Said famously called the sin of Orientalism, transforming not only reality into an artificial, illusory construct, but also people themselves.

While ancient Roman statues and Doric columns may also suggest exotic otherness, their use in the artwork for canonical vaporwave records like Floral Shoppe and internet lust aren’t significant in and of themselves. Taken alone, these tokens of classicism could symbolize almost anything. Yet, as a quick look at the cover of Stereo Component’s Coastal Nostalgia or CVLTVRΣ’s Virtual Life reveal, they nearly always appear in conjunction with a series of other, seemingly random objects. It’s that haphazard conjunction that’s the key here—the juxtaposition makes it difficult for the viewer to situate the scene in any particular context. As such, it qualifies vaporwave as a successor to surrealism, one whose primary goal involves representing the kind of placelessness that comes from a life spent largely online.

Even when vaporwave does seem interested in actual places, these places are never seen with any clarity or precision. Whether it’s the blurred skyline of Bl00dwave’s hotel vibes or the transparent metropolis of 2814’s 新しい日の誕生, the genre has an enduring love for fogging up urban environments and landscapes so that they’re only dimly recognizable. As with almost every other theme in its visual repertoire, this vagueness and ambiguity could be read as another evasion of reality, an attempt to portray the world as indeterminate so as to avoid confronting it directly. Yet at the same time, the covers of a VANISHING VISION or DERELICT メガタワー also support the idea that this mistiness and fuzziness is a result of information overload, which clouds our perception of the world by bombarding us with too many voices and too many messages to be absorbed.

Homes are meant to be private spaces where we can drop our defenses and be ourselves. So it’s slightly unsettling that vaporwave artists occasionally use living spaces in their cover art. Knowing that the genre is often about the virtual, simulated nature of 21st-Century existence, the living rooms on display in Vektroid’s Initiation Tape and Dan Mason’s Late Nite feel contrived and fake. Along with the lounges of Experience and WELCOME HOME, their sterile furniture and glossy TV screens make them appear less as places where we can grow according to our own natures, and more like sites where mass media can reach and condition us without any interference from outside.

Although it partially overlaps with the nostalgia of video games, vaporwave’s fixation on outmoded tech and outdated graphic design is largely a comment on the 21st Century’s pretensions of being unparalleled in its technological sophistication. Whether it’s the clunky PCs featured on Infinity Frequencies’ Computer albums, or the old Toyota Celicas that the appropriately-named TOYOTAセリカ sported on their album covers, the gadgetry celebrated by vaporwave now appears comically unfashionable and awkward. Yet, as the campy graphics of a MARKET WORLD strive to remind us, these inventions were once state-of-the-art, provoking the realization that the tech we now accept as cutting edge will one day seem distinctly unnatural and out of place.

You may have already heard of the curious phenomenon that was Simpsonwave, but what you might’ve missed is that some vaporwave producers had already absorbed ’90s TV imagery into their work before loops of old Simpsons episodes were ever set to Blank Banshee and HOME. In May 2013, for example, chris††† released the inspired frasierwave album; a few months later came the Seinfeld-inspired pizza contigo by BBRAINZ. More recently, vaporwave albums have lifted their cover art from Saved by the Bell and The X-Files, invoking not simply the ever-present hint of nostalgia that characterises so much vaporwave, but also the sad fact that our worlds are still being framed by TV programs that first aired more than two decades ago.

Of all the visual themes and motifs that recur in vaporwave’s cover art, summer and sea seem the most incongruous. With no immediately obvious relation to consumerism, mass media or virtual reality, the palm trees of コンシャスTHOUGHTS’s Sun, Sea and Surfing and Yaya Instrumentals’ BOUNTY appear as far removed as possible from the idea that modern existence is an artifice designed to make us consume more. Yet the focus of such covers is not so much on the sunny nature they display, as what this nature represents. As is evident with the artwork of ロフト tapes’ Parallel Hits and PZA’s VACATION FOREVER, they embody yet another escape from the grayer reality of modern existence—one that’s packaged and sold to us in order to lock us all the more tightly in the present reality’s clutches.