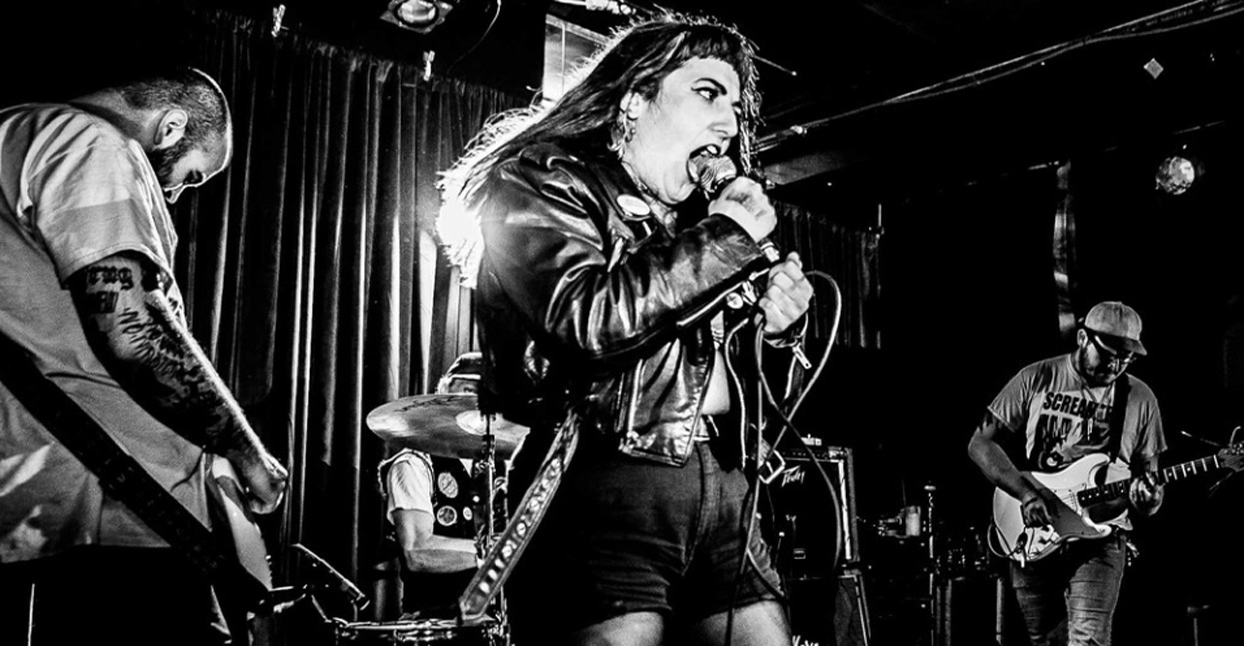 It goes without saying that bandmember relocations can complicate the logistics of keeping a group together. You wouldn’t know it, though, by looking at the scrappy upstart punk outfit Vanilla Poppers. Based (for the time being) in Cleveland, the Poppers formed there in 2015 when punk aficionado Christina Pap moved to the U.S. from her hometown of Melbourne, Australia, where she had been operating her print zine/blog Stitches in my Head and her label Blow Blood Records. Putting the “do” in do-it-yourself, within hours of getting off the plane, Pap connected with members of Cleveland acts like Grin and Bear It, Rubbermate, Cruelster, Perverts Again, and Prison Moan. Vanilla Poppers swung into action the very same day.

Hardly the types to sit around, it didn’t take long for the Poppers to knock out a demo and get in the van, barely slowing down even when visa restrictions required Pap to move to Toronto. As of this writing, Pap is once again on the move, this time back to Australia. Two of her bandmates will soon follow her there, which means that punk fans Down Under can brace themselves for the Poppers’ distinct marriage of punk’s off-the-rails spirit with the crunching precision of metal.

When Pap is onstage (or on the stage floor, where she spends most of the live shows writhing, screaming, and hissing), she prefers to let the band’s snake-like riffs do the talking, but she spoke to us at length about her transcontinental DIY work ethic.

On your blog, you’ve written about how you took several trips to the States before finally moving to Cleveland in 2015. What is it that keeps bringing you back?

There’s good things about Australia, but I just felt that shit in the States is just more real. People are more upfront, and I felt like I had a lot more freedom, just as a human being, to do things.

What was it about Australia that felt so restricting?

I felt like no one really took me that seriously because I was a woman. If any guy wanted to start a punk band, everybody would just jump on it. But I felt like, as a woman, I would work really hard and I just kept getting shoved to the side. It was really frustrating. I was tempted to stay, because when some people saw what I was doing they got really excited. But I still felt like, I don’t know, like I didn’t mean anything.

It looks like you had the opposite experience in Cleveland.

Because I’d been there a couple of times, I already knew a bunch of people. But that was really something to me, that [the other members of Vanilla Poppers] were willing to give me a go. I’d never been in a band before, and they were totally fine with giving me a shot. All of us have worked really hard. We’ve been together about two years now, and we’ve toured four times. We have this new LP coming, a 7-inch, and two cassette tapes. We all have a great time together and all love each other.

What is it about this group of people that they’re willing to throw themselves full-on into something like this? Because the music you’re making is punk, but it doesn’t sound thrown-together.

Well, we all really care about it. Jo [Coone, guitarist] writes most of the music, but everyone has a part. We all just trust each other enough to work it out and take time off work and book these shows, whether they’re big or small, and get on the road. Visiting friends and playing shows in different cities around the States, there’s a big social aspect as well as appreciating contemporary underground punk music.

On your blog, you said that during the band’s 2016 summer tour, you didn’t fight, everyone was accommodating to each other’s needs, and that they were very understanding about your anxiety throughout the trip.

You hear stories about bands going out on tour and breaking up halfway through, or getting really stressed out and angry with each other. But I lived with Jo and [bassist] Steve [Osborne], so we kind of knew what it was like to be with each other for long periods of time. And because the Cleveland punk scene is so small, [drummer] Drew [Vaccaro] was always around. We were all going through different shit on that tour, and we all knew when to be there for each other, when to give each other space, and when to pull our shit together to play a show. By the end of the tour, I had to go back to Toronto, but we’d had such a good time that we didn’t want to leave each other. They’re like my brothers, my people.

Forming a band the same day you arrived in town seems quick.

It started off pretty awkwardly—I think for all of us. Drew’s a grind drummer, and it was also new for Jo because he was new at guitar. So it came together slowly. You can hear it in the demo, which is pretty mid-paced. Over time, things are faster and tighter and a little bit more technical. I guess I haven’t been super-proud of the recordings, but I think that’s more just [a reflection of] the band growing and evolving. I was pretty happy with the way the LP turned out. I felt like the demo was a bit too clean, but then the 7-inch we put out was a bit too dirty. I would want our records to have as much energy as we do live.

You share some pretty intimate details on your blog. How personal are your lyrics?

I talk about [the same subjects] a lot in my lyrics. I think the reason why I’m able to share that stuff is because I don’t think that anybody’s listening. If I think no one’s actually reading what I write, it’s a lot easier to put it out there, because you don’t have to think about what other people are thinking of you. But what else am I gonna write about? I mean, if I wrote about anything else it would be fake, right?

How has your label operation changed since coming to North America?

I’ve definitely put out a lot more since I’ve moved. Unless you’re doing a split with a label from America or Europe, people [outside of Australia] won’t buy stuff from Australia, because you have to get the records shipped there, then you pack them and ship them back out. It makes the cost so expensive. I’ve done nine releases since I left.

How important is it for you that the bands you put out have their own distinctive take on punk?

The thing that gets me with a lot of the bands I put out is the individuality they have live. A lot of times, I feel like I’m lucky enough to have that translated to record. Unfortunately, a lot of them are very rooted to the scene that they’re in and they’re not very popular outside of that. But even if their records haven’t sold that well, I’m still really proud of those releases, and the music that they do is invaluable.

What about Vanilla Poppers?

I guess it’s one of those things where I can’t view it from an outside point of view. I can’t really hear Vanilla Poppers in a way that someone isn’t in the band would hear the band. But I just trust the guys with what they’re writing.