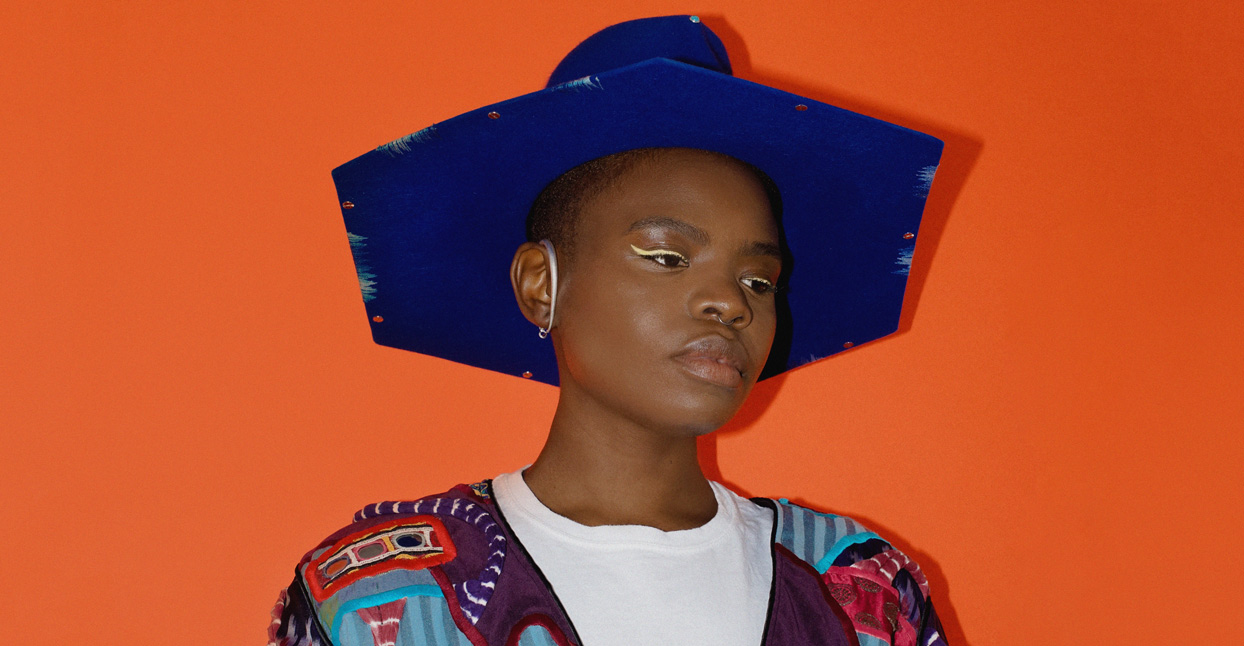 Laetitia Tamko is fired up. Sitting across from me at a cozy Middle Eastern restaurant in Brooklyn, the 26-year-old Cameroon-born artist had started speaking with a sudden urgency—her unwaveringly soft voice raising a few decibels. She’s explaining that she’s done being timid and meek so that other people feel comfortable—something she’s been doing her whole life in response to being called “intimidating,” a microaggression commonly directed at black women and other women of color in order to disempower them. She then opens up her hands, tense with frustration, and pauses for a moment.

She seems to be caught by her own vulnerability, like she regretted the tangent. “I don’t know how not to be so open,” she says. But then, in a sort of fuck it, mask off moment, she shakes off her self-consciousness and looks at me dead in the eye. “This is what I’m feeling right now, so I’m just going to tell you.”

Tamko’s ongoing conflict between self-doubt and self-confidence manifests in her work as Vagabon. On her 2017 debut Infinite Worlds, she emerged as a powerful new force in the Brooklyn DIY scene. In her songs, Tamko honed in on feelings of rejection and diminution, blowing them up into cathartic anthems that sounded as big as whole universes, lit up by her roaring voice. But as Tamko learned how to take up more space for herself, her music evolved as well.

Her upcoming self-titled sophomore record—which features a striking photo of Tamko in a deep blue, angle-brimmed fedora on the cover—is a departure from raucous indie rock into sleeker house and synth-pop. “This record is a coming out for me in a lot of ways,” she says. On Instagram, she teased the arrival of a new video with a picture of her wearing a white leather gladiator’s outfit. In the caption, she wrote: “Flexed a different and new (to you) part of myself for the ‘Water me Down’ video.” When I ask her about that “part” of herself, she answers somewhat elliptically, “I’m inviting people who are interested into the other parts—the parts that I was timid about showing, but that now I just don’t give a fuck about. I’m flexing muscles that I think people would be surprised I have.”

The drastic change in sound came naturally to Tamko. She was no longer a constant presence in the local DIY spaces that shaped Infinite Worlds—in part because most of them had closed (“It’s like, where am I going to play my guitar loudly?”). Instead, music became an activity she practiced in solitude. Tamko began burrowing back into the chart-topping mid ‘00s R&B that she heard on the radio when her family first moved to New York from Cameroon when she was 13 years old. In addition to American pop, Tamko was also obsessed with award shows, a fascination that planted the seed of becoming a musician. She cites P. Diddy, Lil’ Kim, and Beyoncé as performers who seemed to have a supernatural command of an endless list of talents. “That was my first view into what was inspiring to me—people who could do everything.”

But unlike a typical pop artist, Tamko was intent on producing her new album herself, a process that she describes as “grueling,” but necessary. Though she had the confidence to teach herself how to use production software (“I’m good at studying, learning things”), her lack of expertise occasionally led fits of imposter syndrome. In one such instance, she hired “an incredible drummer” to lay down percussion, but then later scrapped all their contributions. “The only way I could survive album two was if I made the thing that was the most me as possible,” she says. “I would hate for a record to not do well because it wasn’t my own vision.” After a beat, she adds, “A part of it is revenge too. I really resent when people tell me I can’t do something.”

Frank Ocean’s 2016 masterpiece Blonde was a reference point for her new album, as well—specifically, the way it conveyed a deep sense of intimacy. Like Ocean, Tamko’s incisive songwriting is marked by the ability to be able to conjure up devastating situations in a single line. On “Please Don’t Leave the Table,” she captures the shock and dismay of being abandoned by a partner mid-meal by sorrowfully repeating the hook: “Please don’t leave the table / I’m still eating.” The enveloping “Flood” summons a well of emotion through its deliberate lack of specificity. “I know / Even if I run from it, I’m still in it,” Tamko sings. It’s unclear what the “it” exactly is; it could be a relationship, depression, or any other situation that constricts. But it’s exactly those infinite possibilities that create the song’s overwhelming sense of anguish—like when you’re trapped in a nightmare in which you’re running from a monster that you can’t see.

Though she chooses not to outline the specific experiences that she addresses on the album, Tamko suggests that writing the record became a way for her to have an emotional reckoning with herself. “I was in a space in my life of not trying to feel like the victim and just move to survivorhood,” she says. After she began working through her own trauma, she started examining the ways that she may have hurt others. “I was asking myself a lot of questions once I had the space to do it: ‘What kind of person am I being? How am I to other people?’ I’m turning the heat on myself.”

But while Vagabon is a statement of self-exploration and understanding, Tamko emphasizes that the record is not just for herself, but for her community. Ninety seconds into “Wits About You,” the music drops out and Tamko sings: “I was invited to the party / They won’t let my people in? / Well then, never mind.” She describes the song as “a shot at gatekeeper culture,” going on to say that she wants to bring her friends, musicians, and collaborators along with her into traditionally privileged and white spaces. “On this album, I wanted to be people’s big sister in a way. I wanted people to feel they are protected and heard,” she says. “Maybe there is a one-black-person quota, but I’m kind of like trying to be a spy. I’m getting everybody in. Otherwise it just feels masturbatory. You know? What’s the point?”