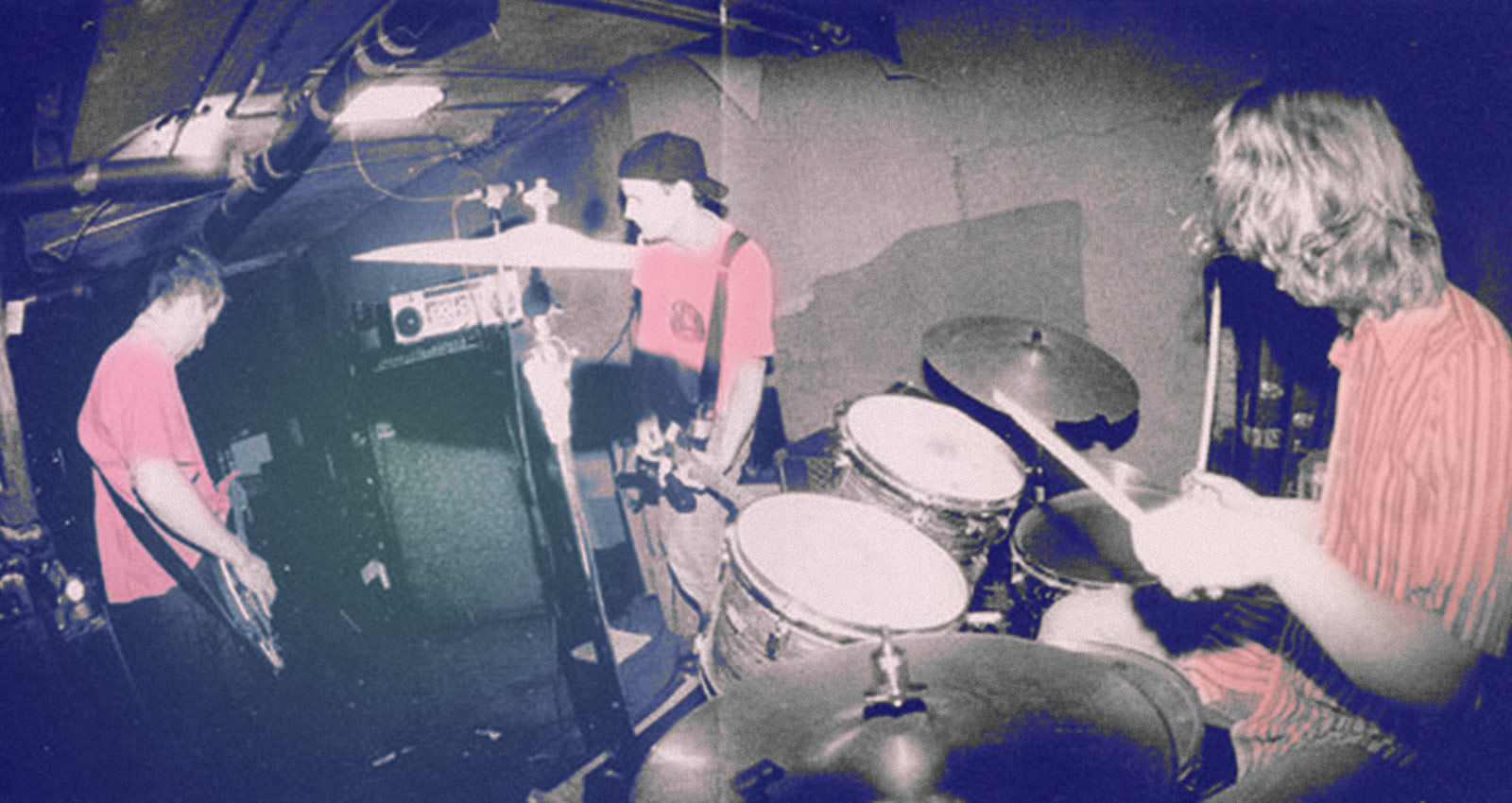 Unsane’s wall of nasty noise represents a great microcosm. Making their homes in the then-dilapidated and dangerous Alphabet City section of the East Village, the original trio of guitarist and vocalist Chris Spencer, bassist Pete Shore and drummer Charlie Ondras (who passed away in 1992) took their bleak surroundings and nihilistic tendencies, their appetites for “shrieking feedback, machine sounds, and car alarms” (as Spencer describes it), and their obsession for blood-drenched scenes and fused them into what would be Unsane’s signature sound and vision. The end result was a violent, and ear-splittingly loud, sound; quintessential NYC fare.

Now, after eight albums proper, a slew of singles and live collections, recording for a ton of elite labels, and three decades of drastically altering the noise-rock and outsider metal landscapes, Unsane are spearheading a new venture: their own label, Lamb Unlimited.

The imprint will serve as Unsane’s digital platform for their mostly out-of-print and unavailable discography, along with newly re-pressed and remastered vinyl and various side projects. (It’s mostly run by Spencer, with longtime band manager Todd Cote doing a lot of the grunt work.) “Lamb Unlimited will be the hub for all that shit,” Spencer explains. “We’re going to do it from the beginning, chronologically, one by one, and hopefully the whole catalog.”

Lamb Unlimited’s inaugural release harkens back to the earliest days of Unsane’s long, winding career. Previously unreleased, and only just unearthed, Improvised Munitions & Demo marks Unsane’s beginnings: a crucial document of the downtown movement and, arguably, the pinnacle of the Spencer, Shore, and Ondras era. Made up of the seven songs that comprised the original Improvised Munitions, and rounded out by four demos that Spencer hawked to score gigs at local dives like CBGB, The Pyramid Club, and ABC No Rio. The collection, thought to be long-lost, showcases these fledgling noisemakers in total mayhem mode. With production values that call to mind a rat-infested sewer, the trio unleash a dissonant, rumbling attack that is off the rails, and laced with the ethos of punk.

Naturally, living in New York City in the ‘80s played a major role in their wild direction, both creatively and personally. “Things were wild, just in general, in life at that time,” says Spencer. “New York was a really different place: really chaotic, violent, noisy, dirty, just gross and fucked up. And our lives were pretty chaotic. Everybody’s doing a lot of drugs and we’re living in shitholes. Just a crazy day-to-day existence.” Improvised Munitions, and subsequent albums, mirror that vibe, according to Spencer. “It’s really reflective of our lives at that time,” he says. “A lot of being in Unsane has been, for me at least, about catharsis and just expressing what’s going on in my life. I think every record is really a testament to what was going on at that period of time.”

That Improvised Munitions’ release was curtailed by the disappearance of the label’s owner encapsulates the chaos of yesteryear New York City. As the story goes, the late Sean McDonnell (of fellow noise-rock outfit Surgery) clued Spencer in on the Long Island-based Circuit Records, who were slated to release Unsane’s debut. It didn’t go exactly as planned. “We were really jealous that Surgery got their big break (with Circuit) so we were like, ‘We want to get a record out so bad’ and Ernie, the label owner, was cool with it,” Spencer recalls. “Ernie handed me a test pressing one night at the Pyramid Club, and after that night, I never saw him again. He completely vanished off the face of the earth. I had heard about Ernie and his cocaine habit and that he probably owed a bunch of money to drug dealers. But nobody could find him.” To add insult to injury, Spencer was on tour when his roommates, to support their own drug habit, stole his test pressings and skipped town.

Decades later, in a serendipitous twist, Spencer discovered that a pal bought a copy of the test pressing at a record store on the Lower East Side in the mid-‘90s, storing it in his record collection and keeping it in mint condition.

Thirty-three years after the fact, and better late than never, Improvised Munitions captures Unsane at its most brutal and wired, mostly due to Ondras’ full-throttle mettle. “Our attitude was chaos, speed and noise: just a different ethic, just more ‘beat-you-in-the-face’ kind of ethic,” Spencer says. While Spencer and Shore were noise obsessives, Ondras was the classic rock guy. “Charlie was really influenced by Mitch Mitchell and Ginger Baker,” Spencer explains. “He was into punk rock, too, but Charlie would definitely like some pretty serious classic rock. That’s another aspect of his style: tons of rolls all over the place and that swinging kind of beat thing going on.”

Improvised Munitions also presaged Unsane’s visual aesthetic—specifically, their penchant for album art adorned with blood-splattered scenes. The art for Improvised Munitions, created by Shore and photographer Jens Jurgenson of Boss Hog, is significantly tame by comparison to later covers (’91’s self-titled debut, ‘95’s Scattered, Smothered & Covered), but remains disturbing nonetheless. “That’s the single drop of blood. For us, that was something of the Holy Grail early on,” Spencer explains of their thirst for carnage. “We were just gore hounds. We loved noise, horror, and gore. We were just kind of crazy kids.”

Along with the aforementioned Surgery, Unsane formed indelible bonds with like-minded degenerates, sharing dingy practice spaces and regularly appearing together on bills locally. While most of the groups were lumped in under the obligatory “noise-rock” tag, Spencer remembers the scene as a gathering of eclectic, kindred spirits, each banging out their own distinct racket.

“We shared a practice space with Pussy Galore, so that really helped, because they would give us advice,” says Spencer. “Then Cop Shoot Cop moved in there, and Railroad Jerk, too. It just started a whole kind of community. We had friends who booked shows at the Pyramid Club, like Tom Surgal. There was this whole scene and the bands didn’t all sound the same. They were all very reflective of the Lower East Side or East Village of that time, which was fuckin’ violent crime and drugs.”

Spencer and Shore’s circle of downtown musician friends helped them soldier on after the death of Ondras in 1992. They briefly flirted with the idea of retiring the Unsane name and launching a new project, but drummer Vinnie Signorelli, who they toured with while serving as the backing band for JG Thirlwell’s Foetus, ultimately stepped in for Ondras for good. The turnover continued, as Shore left the band upon the release of 1993’s Total Destruction and on the heels of a tour with Biohazard. Enter Unsane soundman Dave Curran. He assumed bass duties and the beloved, longstanding lineup of Spencer, Curran, and Signorelli came to fruition.

The way Spencer sees it, the two iterations of Unsane rest on opposite ends of the sonic spectrum, and with the advent of Scattered, Smothered & Covered came a decidedly different approach. “That’s when Dave and I started writing together, and that’s when the power stuff started,” he explains. It went from the chaos and noisiness with Pete and Charlie to this power-locked groove with Dave and Vinnie. From there it changed. We got better doing shit and the sound changed from personnel changes. With a three-piece you change one guy and a lot changes.”

With Spencer swapping his claustrophobic wails for a more pronounced bark and the Curran-Signorelli rhythm section laying down hellishly thick grooves, Scattered, Smothered & Covered is a stone-cold classic in the Unsane canon, punctuated by the improbable success of the MTV video hit for the abrasive and strangely hooky “Scrape”: an anti-highlight skateboarding reel of sorts, full of grisly wipe-outs. Over 25 years later, Spencer is still taken aback by its success, especially given the violence. “Oh, my God. It’s so bizarre,” he says. “It was really weird to see Janet Jackson and then that song [would] come on MTV,” he recalls. “We just put minimal band footage in there and then just people getting hurt, which somehow worked. So, no, I did not expect that to do well.”

Having shored up their lineup with Scattered, Unsane cemented their cred as downtown scene survivors and touring juggernauts. The albums they’ve released since then—Occupational Hazard (1998), Blood Run (2005), Visqueen (’07), Wreck (’12), and Sterilize (’17)—testify to their enduring strengths, presenting the band at their heaviest, noisiest, and most disaffected. Looking back on their career arc, Spencer isn’t shy about what he likes and what he would change. “I really like the songs on Occupational Hazard, it sounds all right,” he says, “but it could have had a little more punch to it production-wise, which is what Visqueen really had with Andrew Schneider producing. It starts out with this kind of clean guitar and then when the bass and drums come in, it just fuckin’ slaps you in the face. That one came out really good and is one of my favorites. I think Sterilize, Visqueen, Scattered and the first record are my favorites.”

With most of the label wrangling done and the rights to their albums in their hands (save Total Destruction and Sterilize; Matador and Southern Lord currently own the rights, respectively), Lamb Unlimited is plucking the Unsane catalog from oblivion. Unsane’s debut album, originally released by Matador in 1991, is next on the docket.

As for the current state of Unsane, Spencer is on the fence about where he goes from here. Four years have passed since Sterilize and he’s laser-focused on Human Impact, his new band with members of Cop Shoot Cop and Swans.

“As far as I’m concerned, I’m done,” he says of new music from Unsane. “I figure it’s kind of mission accomplished [since the launching of Lamb Unlimited]. I want to do other shit so I’m doing Human Impact with Jim [Coleman] and I want to do other shit that’s creative in different ways. The guys in Human Impact are just so fucking incredibly good. I’m the weakest link in that chain, which is awesome.”

He continues, “I feel like I did that (Unsane) for 30 years, so what the fuck: move on. But who knows. If something happened where it would be fun—that’s the main thing for me: that it’s interesting and fun.”