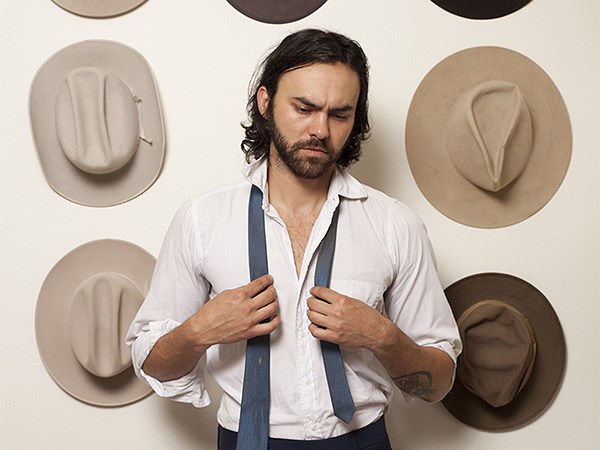 “The music I intend to make, the music I actually make, and the music I have made are three different things. It’s up to me to define it.”

When Alejandro Rose-Garcia—aka Shakey Graves—played Washington, D.C. this summer, he didn’t expect to find the scope of his forthcoming sophomore record and the title of the work itself laid out before him on the walls of a national monument.

It was the last night of his first true headlining tour, a successful run of sold-out shows that concluded at The Hamilton, the Capital’s ritzy music hall that sits just steps from the White House. Rose-Garcia was touring with little more than his guitar and the kick-drum he’d fashioned from an old suitcase, and he somehow wound up taking in the illuminated, alabaster walls beyond the fences guarding the emerald lawn of 1600 Pennsylvania Avenue from a balcony somewhere above the stage he’d played, shortly after his bare set. The admiration for his surroundings didn’t quit, and the next day he and his manager took the venue up on an offer to ditch the band van in the loading dock and sightsee for a bit before heading out.

What followed was a whirlwind trip through the Smithsonian Institute, that sprawling collection of artifacts and treasures that catalogs everything from unearthed dinosaur bones to Dorothy’s ruby slippers from The Wizard of Oz. Their stroll brought them from the dawn of man to the achievements of modern society. Right before they were getting ready to check out the astronaut suits, the Smithsonian closed for the day, and they found themselves making their way toward the Lincoln Memorial as the first timid drops of an impending storm fell.

“It’s really majestic, and it has this ‘Roof for Everyone’ kind of feel to it,” recalls Rose-Garcia of the visit to Lincoln’s stony seat. Making a beeline for the words carved into the walls near the massive statue, he found himself faced with two of the President’s most iconic speeches: the Gettysburg Address, delivered in the midst of the Civil War on the grounds of its bloodiest battle, and the Second Inaugural Address, a solemn oratory that mourned losses felt in the wake of a conflict that nearly tore the country apart.

“I took a knee, and I’m soaking wet, and I read the whole thing out loud,” he says. “The Second Inaugural is written really, really well; it’s one of my favorite speeches. I just really paid attention to it, and flowing around in my brain is everything I just saw [at the Smithsonian]—dinosaurs, insects, amazing gemstones—the majesty of the earth, right? And then you go to this place that’s all about this horrible war. We had just toured all the Civil War states, so it was just compounding things.”

That’s when he found it: “And The War Came.” Dripping, slightly delirious from the wild night before and completely by accident, Rose-Garcia encountered the title for his official label debut with Dualtone—and the perfect statement that framed each and every one of its songs as prologues and parting thoughts—in the words of a President who somehow forged a future from a shattered past.

“The statement, ‘And the war came,’ it stands alone,” he says. “This war had already come, but it sounds like it’s impending at the same time, like something’s about to happen while we’re looking back in retrospect. The title means a lot in the sense that this is uncharted territory for me, but at the same time it’s very familiar. It feels looming, releasing an album on a full scale and my first time working with a label. It’s essentially one of my first times really collaborating with other people. It’s a pretty big departure from my previous work, and the onslaught of things going well and being able to tour with a ton of crazy bands all felt very dramatic in a good way.”

Given the lyrical and stylistic breadth of the record, it’s easy to see why. Unlike the experimental, solo explorations of 2011’s Roll The Bones, And The War Came is concentrated, deliberately varied, and the product of pushed artistic limits. The bereft, heartbroken “The Perfect Parts” and frenzied breakdowns of “If Not For You” may revisit the discordant and unhinged sensibilities of the man who played in open tuning and favored a shoddy suitcase to an actual drum for percussion, but the quality of regret and rage echoing long after Rose-Garcia delivers the final note feels totally new, and we’re not sure if he’s mourning a relationship or on the cusp of ending one.

“I don’t think any of the songs run off too deep into things that have happened to me,” he says. “I think that talking about death is a metaphor for any sort of death—emotional death, losing a friend to drugs or to another city, to losing a loved one. Just having general change in your life. It’s very much an album about things changing in your life, and it feeling as dramatic as if it were a battle, because sometimes everything hits at once.”

His collaborations with singer-songwriter Esme Patterson are arguably the most approachable on the record. The cheeky “Big Time Nashville Star” throws a slight side-eye to his indie success, and the triumphant “Dearly Departed,” the album’s immediately likeable single, has already garnered a smattering of YouTube covers.

Rose-Garcia still writes and records the majority of his work with a home studio setup in Austin, but And The War Came is polished in all the right places and the fortified foundation from which he can continue to craft the next chapter of Shakey Graves’ story. (The tonsil-ripping screams of “The Perfect Parts” were laid to tape on a whim in a basement in Seattle while he was in town for the Sasquatch! Festival, but that’s an exception, not the rule.)

“I hope And The War Came points in a direction that people might not expect,” he says. “The music I intend to make, the music I actually make, and the music I have made are three different things. It’s up to me to define it.” He doesn’t feel tethered to the acoustic guitar and suitcase drum, and despite the fact that And The War Came was pulled from a page of American history, his ties to Americana and folk are as mercurial as the weather that met him at the Lincoln Memorial.

“I imagine my records in the future will be a little less themed,” he says. “No matter how crazy I try to make it sound with a guitar and a suitcase, there are only so many things I can do. I like that it’s taken more of a Western, American side to it, but that wasn’t my intention. I might make a rap or folk or country or really weird mixed-bag album or a garage album. Get used to having no idea what I’m doing, because I don’t. I know where it’s coming from and where the songs come out. And sh-t is getting weird.”