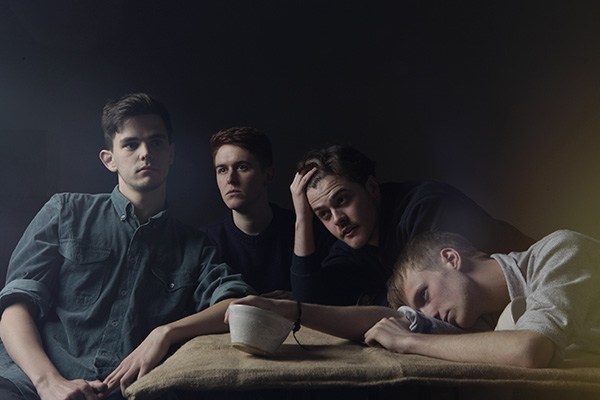 “You aren’t the best judge of anything you are currently playing. Although we were very keen to allow scrappiness and humanity into the recording, we don’t see those preoccupations as mutually exclusive.”

“Hum,” the first track of Gist Is—the full-length debut from the Leeds-based band Adult Jazz—is also an accurate description. The song opens with a drone in the reedy style of 1960s LaMonte Young, before an airy male voice enters, subtly echoed and then strangely doubled. The music takes its time to build, as little electronic murmurs begin to peek into the fabric. The drone endures. Four minutes into the seven-minute tune—the songs on Gist Is are nothing if not extensive—we get a percussive beat and the vocals finally settle into a regular rhythm. A tight trombone lick echoes and responds to the vocals. There is a stunning variety to the timbres presented, acoustic and electronic.

It isn’t easy to discern the provenance of any of the sounds in “Hum,” but perhaps that’s the point. The new album is the result of a three-year writing and recording effort that took place alternating between Leeds and the Scottish Borders. “Each summer was a process of consolidating and reimagining what we had recorded more scrappily throughout the previous year,” the band wrote in an email interview. They fleshed out vague song ideas together and used recording as an “intervention”—constantly tweaking and shaping until things settled into their final state. “Generally, if an idea sticks for longer than a couple of sessions, we are keen to mold it until it works, rather than generating and discarding half-formed [attempts],” the band explained. “Hum” and most of the other tracks on Gist Is bear evidence of this approach; they sound as if the band fleshed out a core idea in every imaginable direction, and then subtly removed the core itself.

Fortunately, the results don’t sound overly polished. According to the band, “you aren’t the best judge of anything you are currently playing. Although we were very keen to allow scrappiness and humanity into the recording, we don’t see those preoccupations as mutually exclusive.”

Adult Jazz has been brewing for some time. Harry Burgess, Steven Wells, and Tim Slater played together as a trio in their teens in Guilford and reunited at university in Leeds; they met Tome Howe through a mutual friend, and formed the band. The album has always been the band’s main focus, with live performance on the side, and its sound informed by the Leeds scene. “The good thing about Leeds and the people there is that they are prepared to take risks on smaller, weirder bands—people are generous with support slots when bigger acts come to town. As a result, we ended up playing with some bands we loved early on,” the guys said. “People are pretty supportive and interested, and actually go to [gigs]. Cheap rent helps artists. Humanities students have lots of free time.”

There’s something of the humanities student present in the broader themes of this album. “The record title, Gist Is, is based on the tension between transcription and more unformed, intuitive expression. That tension works out aesthetically in the music and thematically in the lyrics. Often, some uninhibited vocal expression will extend beyond formal words, or there will be an uncompromising union between an instrument and a voice,” they explained. Toward the end of “Spook,” Burgess sings atop a driving beat and layered, postminimalist guitar, tilting constantly between clear words and syllabic ululations. It makes a clean transition into “Idiot Mantra,” in which the vocals at first consist entirely of warbles that ricochet in uncanny stereo (headphones recommended).

The closest sonic parallel might be the Dirty Projectors or Grizzly Bear, especially in the tension between verdant orchestration, frail vocals, and electronic noise. The band cited Björk, Joanna Newsom, Arthur Russell, and Meredith Monk as important influences. There’s also a lot of early minimalism: in the melody of “Am Gone,” in which motives build additively in the style of early Monk or Philip Glass; or in the hiccuping, wordless background vocals halfway through “Spook,” evoking the “doot doots” of Steve Reich’s classic ensemble works. And in the band’s insistent doubling of voices and instruments, there is a hint of Olivier Messiaen, recalling the French master’s bizarre groupings of sounds that move together in swift, rhythmic unison.

Though most tracks are lengthy, Adult Jazz’s music is not expansive. It’s locally focused; there aren’t really any typically indie, anthemic builds. Instead, you find moment-to-moment explorations of timbre and rhythm. The first minute of the concluding track, “Bonedigger,” is laid-back and bluesy; then the music transitions to entirely new, hiccuping material; the third minute is a duet between vocals and trombone. The music continues in this manner, weaving together disparate materials for an effect that is intellectual and a bit playful. The band describes their approach this way: “In some songs, it’s the consideration of moral or religious ideological maxims versus an internal, personal understanding of those things. The spirit versus the letter. In others, it’s about securing meaning or truth—between people, internally within a person, or between a man and his dog!”