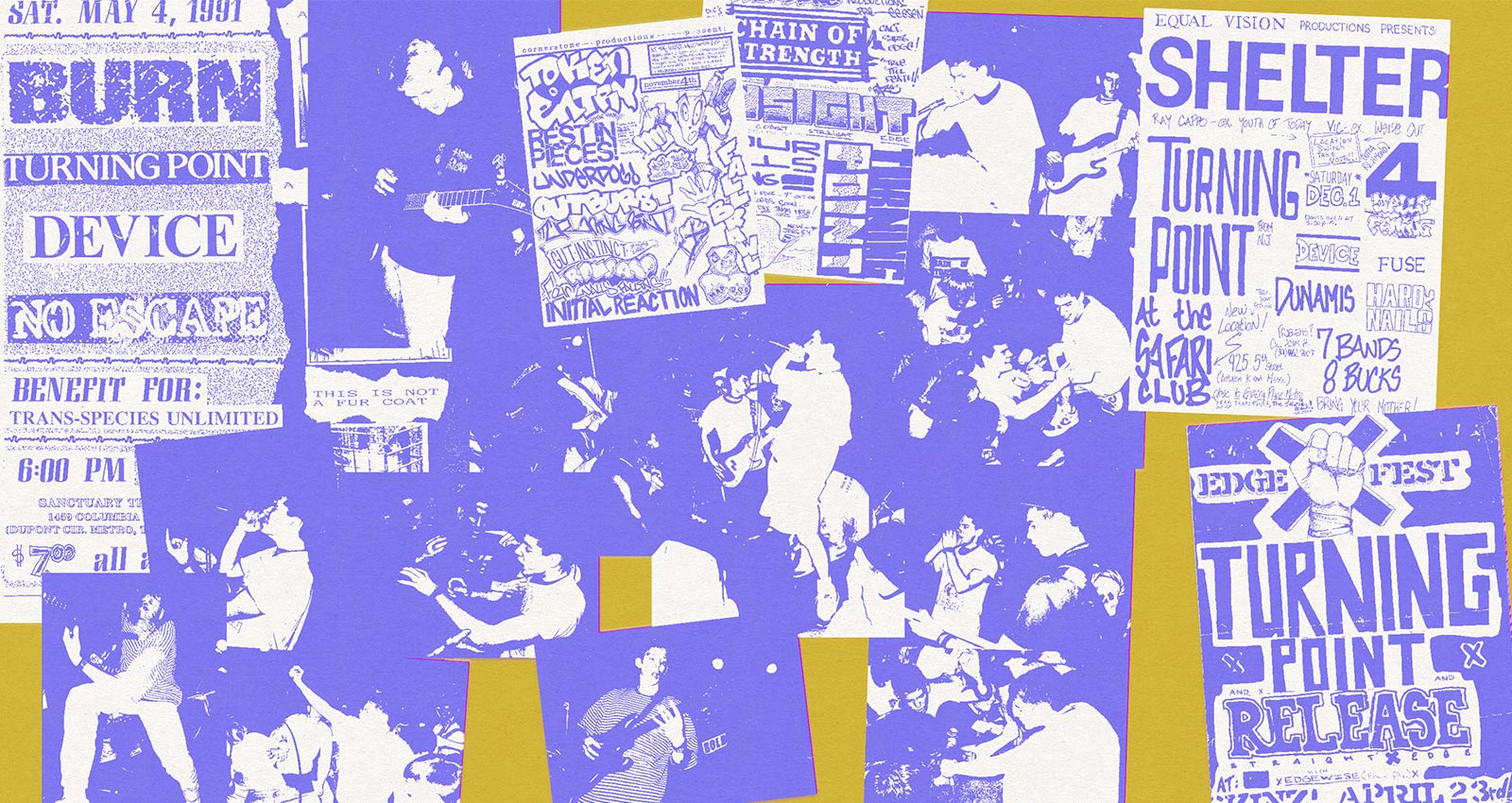 On the surface, New Jersey straight edge combo Turning Point seem like a prime example of the profound influence that both Youth of Today and the New York hardcore scene had on many groups during hardcore punk in the ‘80s. But as the band progressed to include elements of the heavy metal that guitarist Jay Laughlin grew up on, as well as the innovative, riff-dominated style of Rhode Island band Verbal Assault, Turning Point landed on a sound that separated them from other groups who began with a similar template.

With their early band Pointless, Laughlin and vocalist Frank “Skip” Candelori played garages and basements with the other teenage groups that had formed in the suburbs of southern New Jersey in the latter half of the ‘80s. One of those bands was Fail-Safe. “We played with Fail-Safe and hit it off,” says Laughlin. “Their drummer Ken Flavell was amazing, and he asked me to play second guitar for their band—which was great, because I was playing drums in Pointless, and I really wanted to play guitar in a band. After a while, Ken and I got to talking about doing our own thing. Skip was into it, and Ken knew a young kid named Nick who played bass. That’s how Turning Point started.”

Laughlin and Candelori were looking to start the new group with a clean slate. “New York hardcore was a huge inspiration, and we definitely modeled ourselves after it,” says Laughlin. “Pointless played these super short and fast songs about how homework sucks. We wanted to get out of writing about goofy stuff and do something with a message.” The band recorded their first batch of songs in 1988, dubbed copies on their dual cassette decks, and sold the tapes via mail order. “I ended up mailing out way more than I ever thought I would,” Laughlin says. “One of our first shows was in this little arcade in Kennett Square, and all these people started going crazy, knowing all the words from the songs on the demo. I remember walking back to the van with Skip and the rest of the guys saying, ‘Wow, I think we’re onto something here!’ It felt like the reaction was immediate.”

A 7-inch released in 1989 on Hi-Impact—the short-lived label run by future Jade Tree Records co-founder Darren Walters—gained the band nationwide recognition. The ‘90s saw them swiftly shedding their initial influences to find a sound that would suit the introspective lyrics that Candelori was writing, which would eventually become the songs that appeared on the band’s sole LP, 1990’s It’s Always Darkest…Before The Dawn. “Skip’s lyrical content started getting into some deep stuff, and I wanted to challenge myself as a guitarist,” says Laughlin. “I was into Metallica before I got into hardcore, so I already liked that style of playing. I got super into Verbal Assault and Dark Angel’s Act III.”

But the group may have been progressing too quickly for some of their fans. “At shows, we’d start playing songs [like ‘Broken’ and ‘Behind This Wall’] with these clean guitar intros, and people would be looking at us like, ‘What the fuck is this shit? Let’s mosh!’” Laughlin recalls. The lukewarm reception to their new direction was one of the reasons the group called it quits in the summer of 1991.

Candelori passed away in 2003, and the group’s surviving members reunited in 2016 for a set at the This Is Hardcore festival, enlisting guest vocalists from the New Jersey hardcore scene like Tim McMahon from Mouthpiece, 108’s Rob Fish, and Geoff Rickly from Thursday. The show was a fitting tribute to Candelori, and showed how intensely the group’s music is still appreciated. Soon after, Revelation Records reached out with the proposition of uploading the band’s material on Bandcamp, followed by vinyl reissues this year. “The dream back then was to have Revelation put out our stuff,” says Laughlin. “I’ve been speaking to [Revelation Records owner] Jordan Cooper recently, and he doesn’t know why he never signed us back then. It’s cool they’re reissuing it now.”

A musical lifer whose current focus is on his thrash-metal band Honey, Laughlin feels the interest in Turning Point derives these days largely from the lyrics of their later material—music that was misunderstood at the time. Far from simple calls-to-arms and pleas for crew unity, Candelori was exploring grief, insecurity, and anxiety with a directness that was rare in a subgenre that can be prone to macho posturing. “Skip’s words mean a lot to a lot of people,” says Laughlin. “He wrote about some heavy shit they could relate to. That’s one of the main reasons the music has staying power.”