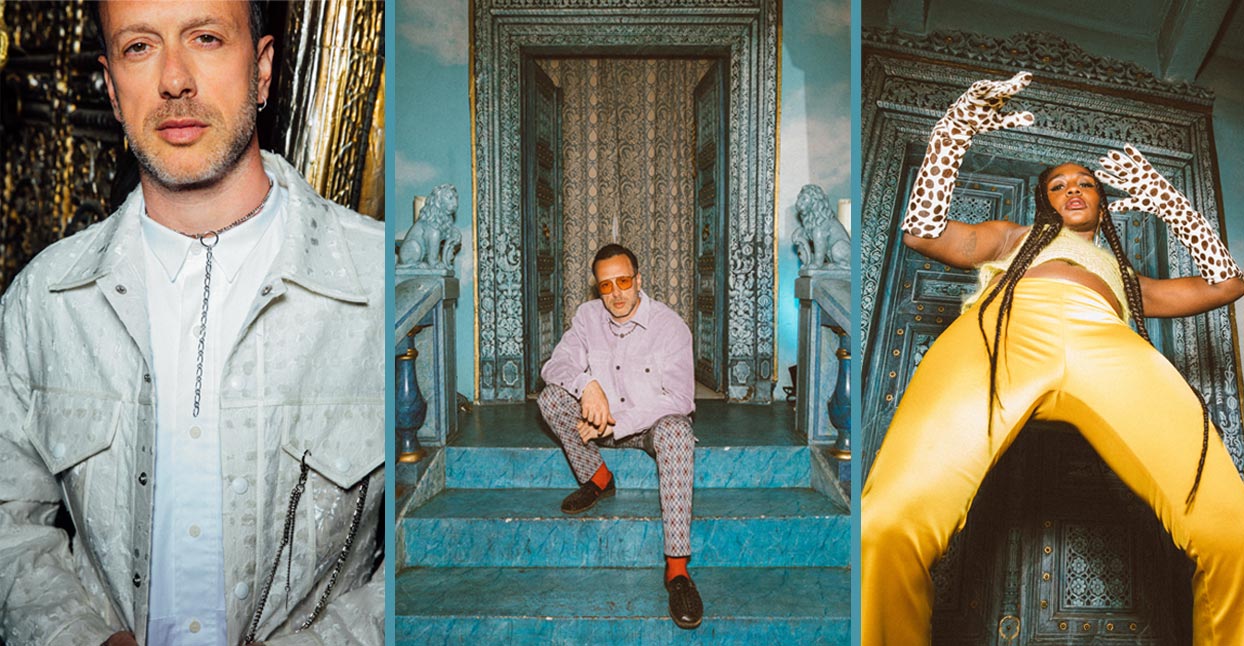 For Faty Sy Savanet and Nicolas Dacunha, rhythm is not just a “universal language”—it’s a life force. Some lyricists are motivated by a piano line or a guitar melody; Sy Savanet—Tshegue’s vocalist and chief songwriter—finds inspiration in any beat that shakes, thumps, or rattles.

“I need percussion and I need to feel a song’s pulse—that’s one of my primary motivators,” she says. “I love low-frequency sounds, and I need to hear them before I can start on my vocals.”

Percussion is the lifeblood of Tshegue’s music. It’s what brought the Paris-based duo together, after early childhoods spent nearly 4,000 miles away from one another. Sy Savanet was born in Kinshasa, Democratic Republic of Congo and lived there until she nine years old before moving to Paris, but  returned to her birthplace often to visit her aunts, uncles, and cousins, many of whom were artists, and to soak up the sounds of a bustling city. It wasn’t long before a young Sy Savanet began singing and tinkering with drum machines.

Dacunha, better known as Dakou, was born and raised in the Parisian suburbs. He spent years playing drums informally in a handful of local bands until he took a transformative trip to Cuba, dedicating three years to studying percussion instruments. In 2013, he met Sy Savanet through mutual friends while she was fronting a now-defunct punk band called Jaguar; they kept in touch for a few more years before starting Tshegue. And while a drum pattern is what inspires Sy Savanet to put pen to paper, it’s her vocals that help Dakou craft a beat; this complementary, give-and-take relationship is central to their songwriting.

Their first EP, 2017’s Survivor, introduced their ebullient sound, and its songs bore evidence of the countries and cultures that inspired their creativity, from the high-pitched guitar riffs of Congolese soukous to the cowbells and güiro flourishes common in Cuban salsa. On their new EP Telema, the band continue their experiments with tempo: “The Wheel” is a sledgehammering club track, on which Sy Savanet lets loose with an empowering war cry (“Just keep your eyes on the road / Don’t look back!”) over thunderous tom-toms and a squelching synth bassline. Guitar-driven “Solola” is a dance-punk number with the frenzied energy of a marching band, distantly echoing Bow Wow Wow’s 1982 cover of “I Want Candy.” The pace slows a bit on the title track, a sparse, woozy rock number with a skeleton of synth, bass, and electric guitar.

“We’ve both listened to so many different styles of music over the years,” explains Dakou. “We just happen to have an affinity for dance music.” Telema honors that affinity in its glistening productions and prominent drum patterns. And for the things that percussion alone can’t express, there is language to fill in the gaps: Sy Savanet sings mostly in Lingala, which is spoken in parts of Central Africa including DR Congo. “Shegué” is a Lingala word used to describe street children in the sprawling Kinshasa metropolis; it’s also a nickname Sy Savanet was given for being, by her own admission, a rowdy child. Lingala is melodious and emotive, capable of conveying feeling even if listeners don’t understand every word.

“I’ve never heard another language that is as punchy and musical as Lingala,” says Dakou, who has come to learn more of the language through his bandmate. “There’s something about its cadence that’s almost percussive.”

The spirit of collaboration and partnership is evident in everything Sy Savanet and Dakou do. When they speak, they take turns when discussing anything concerning Tshegue. In the studio, Sy Savanet does most of the writing and Dakou handles production and arrangements, but they always run every idea past one another before proceeding. This two-handed approach extends to their visuals as well. “We have a message to get across. The music explains a lot of it, but the mix of music and videos create a whole universe,” says Dakou.

The video for album standout “M’Benga Bila”—on which Sy Savanet’s hypnotic chants float over Dakou’s syncopated drums—is a particular delight. After being inspired by a scene in French director Leos Carax’s 1986 film Mauvais Sang, where the protagonist runs through the streets to David Bowie’s “Modern Love,” Dakou and Sy Savanet approached director Sacha Barbin with an idea for a video that would lean more on choreography than cinematography.

In it, Sy Savanet, Dakou, and an assorted cast of characters walk through city streets—past construction sites, train tracks, graffiti-covered walls plastered with Tshegue posters, and specialty African food stores. Each time the song’s loop starts over, something is slightly different—whether it’s a new item of clothing, or the presence or absence of a person. Sy Savanet’s vocals are by turns aggressive and despondent; “M’Benga Bila,” which means “call the police,” describes the breakdown in communication between two people. The video is set in Paris’ 18th arrondissement, in the diverse Goutte d’Or neighborhood that Sy Savanet calls home. The neighborhood is also the scene of occasional culture clashes that can escalate out of control. The choice of locale speaks to another of the duo’s overarching missions. “We are keen on concrete images which reflect our daily lives,” says Sy Savanet. “We include everything we see and everything we love.”