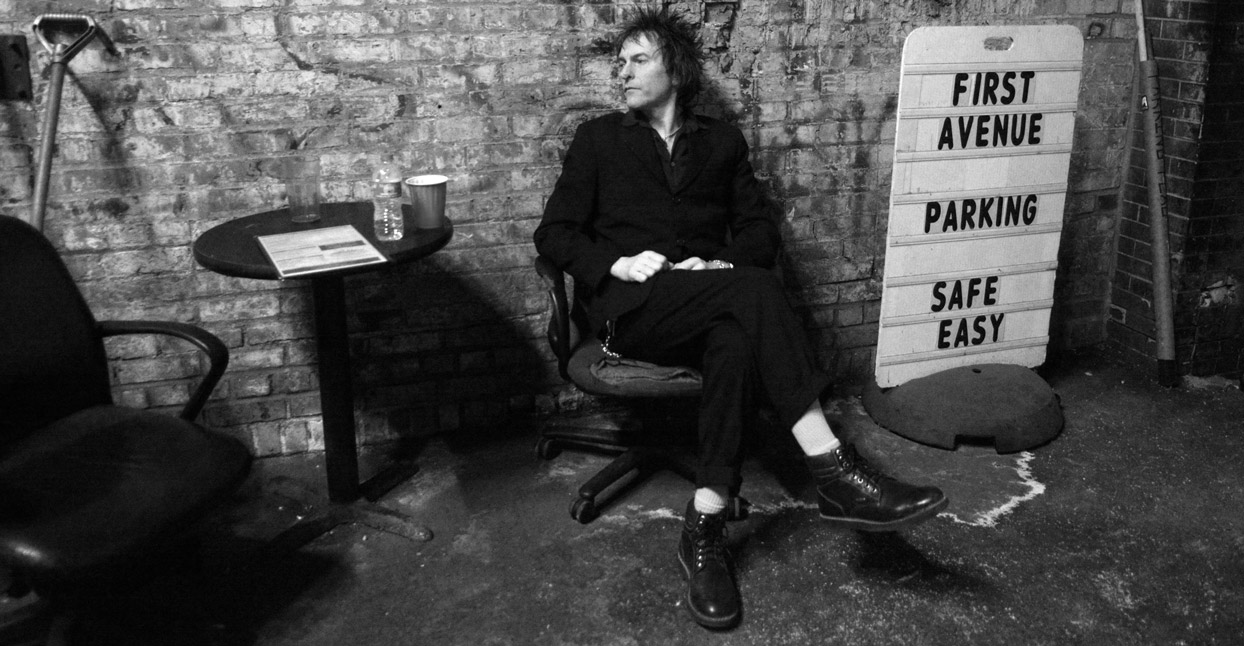 “It’s mayhem over here,” Tommy Stinson exclaims breathlessly from his home in Hudson, NY. “I’ve got hand-stuffed boxes of my new Bash & Pop record with cool extra bits for contest winners ready to go out. I’ve got gear going out to the van, and I need to load my guitar. If you could see what the fuck is going on in my house right now…”

In his 50th year, the Replacements bassist—and frontman for cult power pop outfit Bash & Pop—still has the manic energy of a young puppy. He swears like a kid delighted at hearing the words fly from his mouth, and the new Bash & Pop album Anything Could Happen, the insanely belated follow-up to 1993’s Friday Night is Killing Me, pulses with the optimism of youth. Since joining the Replacements at the age of 12 in 1979 at the urging of his brother Bob, who tragically succumbed to the tolls of hard living in 1995, Stinson has been all about the hustle. In between solo records, as if hell-bent on masochism, Stinson shouldered the bass for the notoriously volatile Guns ’N Roses from 1998-2014. Not only did he win over hardcore G’N’R fans, he survived the Wrath of Latter-Day Axl.

On January 12, the new and improved Bash & Pop touring band, featuring lead guitarist Steve “The Sleeve” Selvidge (The Hold Steady), Joe “The Kid” Sirois (Mighty Mighty Bosstones) on drums and Justin “Carl” Perkins on bass guitar, hit the road. With an opening date in his native Minnesota at the legendary 7th St. Entry, things have come full circle for the freshly engaged Stinson.

Did you feel pressure resurrecting the Bash & Pop moniker? There’s a loyal cult behind Friday Night is Killing Me.

At the end of the day, it just seemed to make sense. That record was meant to be a band record. When the Replacements broke up, originally, I wanted to have a band. I had no interest in being a solo artist. Sadly, when we went to make that record, Kevin Foley, who was the drummer Steve Foley’s brother, wasn’t really up to muster on bass. I don’t mean to say that in a nasty way, because he’s dead now, and was a very good friend, but it just didn’t work out. I had to play bass, and then with the guitar player we had, I had to try and explain to him how I wanted things done. Trying to explain to a really great guitar player how to not play great is really hard. So I ended up playing guitar as well.  I ended up making the whole fucking record with just me and the drums. What we’ve done on Anything Could Happen is exactly what I wanted the first record to be. This is more of a Bash & Pop record in that regard.

You didn’t go in with the mindset of making a solo or new Bash & Pop record?

For the last two years, I had been toying with the idea of doing something. Towards the end of the Replacements [reunion] run, I was gearing up to make something. I already had some friends come by and record some songs that had taken on a life of their own. It was kind of a precursor to the whole Bash & Pop scenario. The songs were recorded in a quick, live-band fashion, and I realized I wanted to make a whole record that way. With the last few solo records I’d made, I took on the role of producing and playing most of the instruments. It’s so labor intensive, and you miss out on the spark of musicians playing and getting a vibe. I called up the gang, started having weekend sessions at my house, and that’s how it all began.

Did the record ever start to go down a mournful, minor-chord, elder-statesman-reflecting on a life-lived-hard rabbit hole?

Hell no! Why would I do that? [Laughs] Minor chords take too many fuckin’ fingers to play. This record kinda wrote itself and did its own thing. It turned into what it became all on its own, except for the song “Shortcut” that I’ve had for about 25 years and finally found a place to put it. That’s about as morose as it gets for me. A lot of stuff on this record is reflective of certain things in my life, but not completely. I don’t write [a] ‘Here’s a woe-is-me about my fucking ex-wife’ song. I mix and match story ideas in my head and try and make them more inclusive, more than just the fucked-up ex-wife kind of thing.

Let’s say you did sit down and write a great ‘ex wife’ song that you really believed in. Would you be comfortable putting yourself out there, totally exposed?

I would never do it. I think when you get that poignant with a particular song, it becomes too personal, and all about you as a songwriter. I inject my experiences into the music obviously, but I really try and mix it up so that it’s more interesting. I could write 50 songs about the stupid fucking shit I got myself into. I could do that all fucking day long. That’s all it would sound like—poor me and all the stupid shit I got into. It doesn’t make for an interesting story. Songs are little capsules of made-up stories. You have your own bit in there personally, but I try and keep it as interesting as possible by including different elements.

Did you think Westerberg got too personal on the Replacements’ album Don’t Tell a Soul?

He’s always done a certain thing that when it is really personal, it’s like, ‘Ouch.’ I think it’s a really great record. I think my favorite Replacements records are Stink, Pleased to Meet Me, and Don’t Tell a Soul. I think the songs are stellar. They’re beautifully crafted and have a vibe to them that was really special at the time. I listen to that stuff today and say, ‘There’s a great fucking track.’

How do you feel about All Shook Down, the last official record?

It was an overstep and an overreach. That was the most dishonest record we ever made. It was a whole lot of trying too fucking hard.

Was there a feeling you were trying to recapture on Anything Could Happen that you hadn’t felt in years musically?

I wanted to make a record the way we used to make Replacements records back in the day. We’d go into the studio with a handful of songs and hack it out in quick fashion. It was an attempt to get a spirited take, bad notes and all. That was the way I grew up doing it, and the way I’ve always enjoyed doing it. This record was a concerted effort to try and do that. Lucky for me, it worked out. I know great fuckin’ musicians, and I couldn’t have done this with just anybody and gotten the results I did.

It’s a very guitar-driven record. You’ve got big power-pop stuff and some twang. Was this a result of Steve Selvidge and Luther Dickinson’s [North Mississippi All Stars] influences?

A lot of what they did was hook up the really good, second guitar parts. The one thing that’s always been really labor intensive for me is to try and get someone to understand where my head’s at for second guitar melody and riffs. I’m very stereo-minded when it comes to guitars. I like the solid rhythm part on one side, and another part on the right side playing off the song and vocal, doing the Mick Taylor kind of thing. Steve and Luther basically grew up together, so lucky for me they’re basically the same guy, only slightly different. They were both able to understand what I was going for and pull it together.

The song “Anytime Soon” feels like a lament for the nights of closing down bars and getting crazy. Where are you at with drugs and alcohol in your life?

I like ‘em! [Laughs] I’m kidding, but that song is really more about me witnessing things from the outside looking in. There were some things going on in my life relationship-wise that made that song come about. It’s a very dour sentiment that you can push me as far as you fucking want, but if you think you’re gonna cripple or kill me, I’m never gonna fucking kill myself for you. You can wreck me all you want, but you ain’t gonna fuckin’ get my life.

Being on the road so much, I imagine you wouldn’t be able to do it if you hadn’t slowed down on the substances.

There’s a fine balance to having a good time but not having too much of a good time. I have to maintain myself. I turned 50 and had to get back into going to the gym. I had to work out a regimen where I’m able to keep my body together. Touring and playing fucking rock and roll for 35 fucking years has taken its toll on my limbs. My fuckin’ thumbs are arthritic, so I have to make sure the rest of my body can show up for the gig.

There’s a lot of trademark Tommy snark and swagger on the record. Are you a permanent wise-ass, or is it a defense mechanism?

If you sit down to dinner with me, you’ll get a fucking earful of my snark. That’s just me. It’s my only defense mechanism. My fists don’t fly as well as my tongue.

Have you ever felt any healthy competition with Westerberg when it comes to solo music?

Not really. He’s Paul. He’s got his own thing going on and he can do whatever he wants. He’s happy with that. I still like to push myself so people say, “You’re 50. When are you gonna slow down?” I can’t slow down. I can’t afford to. I gotta keep moving. I think he’s comfortable not doing anything for a while. I just do my thing and don’t really think about it.

Are you comfortable with how the Guns ’N Roses and Replacements tours wrapped, or were there unspoken grudges and bitterness?

Not at all, because my marriage was falling apart and I couldn’t actually tour with them anymore. I had to turn down several tours in the process and felt terrible about it. At the same time, the Replacements were playing weekend gigs which was easier for me to manage. I switched gears in that regard, and lucky for me, everyone totally understood what was going on. Guns ’N Roses did the reunion thing twice and I’m friends with everyone in that band. The only one I don’t know really well is Slash, but they’re all great guys and still my friends. Axl included. I’m thrilled they’re out there doing their thing and making a big stink.

Are you comfortable in your own skin, in the sense that you can be alone or take a night off and just read?

I do get antsy, and the life that I lead is one of hustle. Since I was a kid it was hustling to play a gig to try and make a buck. You have to keep feeding the beast with art, and relaxing does not come naturally for me. If I’m not working, I’m thinking, ‘Shit! I know I’m supposed to be doing something.’ I don’t know if that’s something that’s ingrained in me from my mom always having to hustle, or being in the Replacements. If you’re devoted, the life of a musician is all about hustling, unless you’re really fucking lucky and sell millions of records. Even then, you’re still fucking hustling to maintain it. It never stops.