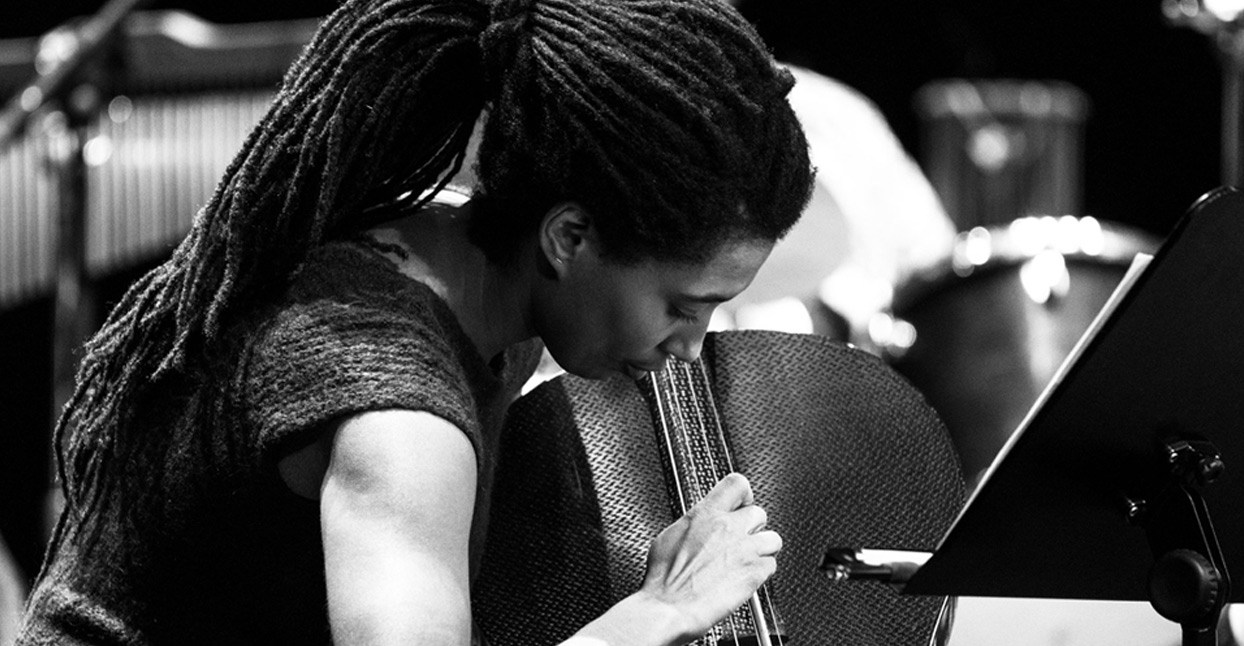 It’s a few days before Tomeka Reid is set to release her second album as a bandleader, and the cellist/composer is busy. Not so much with album prep and tour, but with all of the other things she does when she’s not leading a band. Reid is currently teaching composition at Mills College, and is the Darius Milhaud Distinguished Visiting Professor this semester. “It’s super awesome; it’s just so last-minute,” Reid says of the honor, on a call. “I had a full tour scheduled this fall, so fitting it all in has been very interesting, to say the least.” In a day, she’ll be performing in Los Angeles, then flying out to Rome, where she will tour Europe as a member of the legendary Art Ensemble of Chicago. Then, she’ll briefly return home to Queens before flying back to California to teach again.

Somewhere in between the travels, Tomeka Reid Quartet’s thrilling and highly anticipated second album, Old New will be released. For that album, Reid reconvened the group that was first heard on the crackling 2015 debut: drummer Tomas Fujiwara, double bass player Jason Roebke, and guitarist Mary Halvorson. Its songs strike out in bold, lyrical directions, the three string instruments darting amongst one another like bees in a garden. “We’re always all busy, but we find moments somehow to make it happen,” she says. “It keeps it fresh and I’m always excited for it.”

Since her debut in 2002, Reid has emerged as a vital new voice on the jazz scene, her cello serving as foil to greats like Anthony Braxton, Roscoe Mitchell, and Nicole Mitchell. Despite the century’s worth of jazz, the cello remains an underutilized resource, usually deployed by bassists like Ron Carter and Oscar Pettiford rather than treated as a frontline instrument in its own regard. “I’m trying to change the cello’s role in jazz!” Reid exclaims.

It’s a transformation that mirrors her own life. Born in Washington D.C., Reid grew up studying classical cello, but her perspective shifted when she moved to Chicago in 2000 for graduate school. The Windy City’s status as home to some of jazz’s fiercest innovators opened up an entirely new world of sound to Reid. “At most pedagogy, you’re just not encouraged to improvise, you’re only trained to play what’s on the page,” she says, adding that the emphasis on intonation and competition for orchestral work makes it hard to just let go and play. “It’s tough for string players. It’s beaten into your head to be perfect all the time, and that can squeeze the joy out of making sound.”

Reid threw herself into Chicago’s improv scene, working in numerous contexts as accompanist, before leading her own ensembles, which range from trios to large ensembles to the quartet. “I’m only just getting used to wearing so many hats,” she says. “Like now, I’m a teacher, too. In some groups, I’m more the bass player, so I have to have that dexterity for playing more pizzicato. But in other groups, I’m the soloist. It just keeps me on my toes.”

Now based in New York City, Reid’s rise comes at a fortuitous time, when many female improvisers are pushing past the boundaries that hampered previous generations. “I feel very fortunate to be in this time with so many amazing improvisors and so many amazing women improvisors that are doing really creative stuff,” she says. Case in point, her quartet sparring partner Mary Holvorson was just a week ago announced as a MacArthur Fellow. “I was so stoked when I saw it was Mary. She deserves it, she works so hard.”

In much the same way that Reid nodded to forbearers like Eric Dolphy and Billy Bang on the Quartet’s first album, Old New pays tribute to her mentors, colleagues, and family members. Her mentor Nicole Mitchell has the jaunty “Niki’s Bop” named after her, riding a snare roll from Fujiwara and pulsing line from Roebke as Reid and Halvorson dart around. Her maternal grandmother also has a piece named for her, while an old photograph of her paternal grandmother appears in the album packaging. “Ballad” was “a secret dedication to Mary; the quirkiness of the tune made me think of her,” says Reid, and it moves from stately to frenzied and back. Even though most of “Edelin” is spare and diffuse, Reid confesses that the melodic line that emerges near the end is informed by her secret Mariah Carey fandom.

Throughout the nine compositions of Old New, there’s a visceral thrill in hearing how Reid’s cello and Halvorson’s electric guitar urge, grapple, startle, and support one another. “Wabash Blues” features a melody that zigzags in dizzying coordination with Halvorson and then spins off into some of Reid’s own mesmerizing bow work, elegant yet energetic and sharp-edged. And when Halvorson emerges, she’s like a Bird-of-Paradise in a garden salad, colorful, prickly, and totally weird at once.

Old New was recorded with the group playing in the same room, approaching it like a live set, that spontaneous energy remains intact on the album. “But even with this recording, I hear myself out of tune and that’s still in my brain after all those years of classical training,” Reid says. “As I get older, I let that go. Making music and enjoying those mistakes, it’s about the feeling, the connection with the other musicians.”