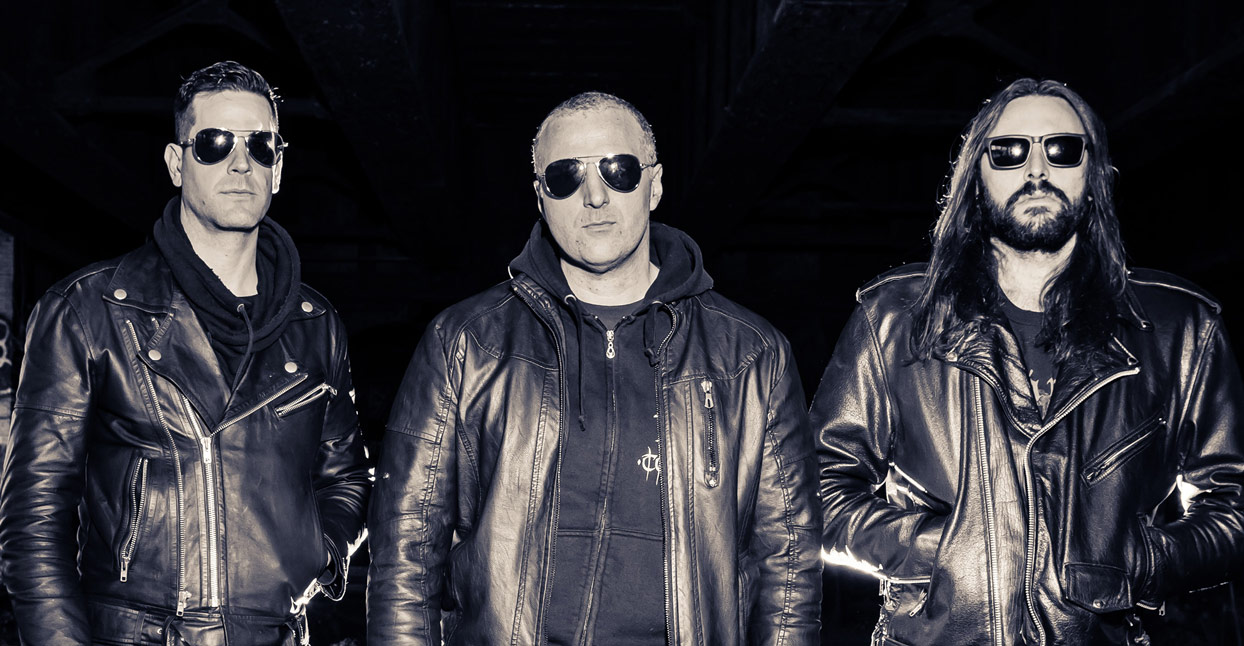 A little under a decade ago, mechanical engineer Mike Hill found himself in a an all-too-familiar predicament: his employer was shutting down their New York City office, leaving him without a job. Most 9-to-5ers respond to bad news of this sort, understandably, with incredulous sobs or fits of anger. Hill, on the other hand, breathed a sigh of relief when presented with the pink slip; at last, he was free to draft the blueprint for the avant-metal band Tombs, the musical equivalent of a Rube Goldberg machine. The band specializes in a sinister fusion of black metal, hardcore punk, doom, and post-punk, which reflects Hill’s obsession with all things abyssal and arcane.

Hill and company have just released The Grand Annihilation, their ambitious follow-up to 2016’s excellent All Empires Fall EP. As the first Tombs LP without longtime drummer Andrew Hernandez II (who parted ways with the group following the aforementioned release), their new direction reflects a significant shift in the group’s chemistry, though their grim spirit remains the same. We caught up with Hill to detail the explosive, apocalyptic album, reflect on Tombs’ decade-long journey, and talk horror movies.

Between the cover art, the name-drops of Ares and Amonet, and the Latin lyrics, there’s lot of antiquity embedded in this album. In a press release, you mentioned the ancients’ transcendent, ritualistic approach to art, and how you have similar intentions with Tombs. How did you come to develop that philosophy?

I don’t really have a background in mythology or philosophy. I just approach everything out of curiosity. I spent a lot of time reading about the ancient world—Sumeria, Egypt, things like that—and gathered little pieces that I found interesting about each one of those things, and I incorporate that into a universe, an aggregate of all of those things. It’s sort of a combination of Egyptian, Roman, Greek [elements] amalgamated into the ideas that are on the record. And also the occult, too: certain pagan philosophies have been influences, even though I don’t necessarily subscribe to any of those philosophies on a personal level. It’s more about seeking to understand how other people try to describe the universe in order to figure out the type of universe we live in. That’s where the lyrics come from.

A few years back, a scholar named Michelle Phillipov wrote a book on heavy metal. One of her main arguments she makes is that the genre’s longstanding obsession with all things profane and blasphemous is not a reflection of any worldview or values system, but is just part of the craft—it’s the same kind of thrill horror movie fans get when they see some great gore. Do you have that same mindset with regards to your own art?

I’m a huge fan of horror. If you watch, say, The Evil Dead, that’s Sam Raimi’s interpretation of a certain type of reality, the mindset he was in. I’d say that that’s the way I approach music. It’s my interpretation of the cosmos around me, interpreted through that particular continuum of time. With regards to The Grand Annihilation, there’s a microcosm encapsulated on that record, and it only exists in that period of time. The overarching philosophy that I have, it might change from record to record; it might grow, or evolve, or turn into something completely different. I don’t take any responsibility for contradicting myself from record to record either, because it’s all part of a process.

Tombs’ lineup constantly rotates, and The Grand Annihilation features a different roster of performers than the last record. How would you characterize your chemistry on this album, and how do they fit into the ritual?

This particular record has less of a band feeling than any of the other albums, for sure. One of the realizations that I came to was that Tombs hasn’t really had a traditional band feel. When Andrew Hernandez left the band after Savage Gold, it wasn’t catastrophic. We’re still really close friends, and maybe someday we’ll do another musical project again. But his lifestyle changed, and he had other priorities, and that’s how things went for him. Replacing him was a very difficult thing to do because you have to find someone on the same page musically and philosophically. I’m still searching for that, I guess.

One thing I’ve learned is that, at this stage in the game, I’ve been in the band for about 10 years. It’s a reflection of all my creative energy. On this record, it’s more of a reflection of that energy, rather than a band dynamic. So that’s the environment that the record was created under.

There’s more clean singing on this album than on Savage Gold, but as always, your vocals are frequently painful, as if they’re excruciating to perform. What’s your strategy when it comes to ‘getting in the zone’ to channel the dark side?

It’s really technical in some ways. I don’t work myself into some type of a frenzy. In order for things to sound good and come out the way you want them to, you have to understand t your relationship with your body. You have to manage your breathing and warm yourself up the right the way so you achieve the right result. I have a very technical approach to things. I started doing it [clean singing] last year on Savage Gold, and with this record, I applied the same principles. Prior to that, I’d try to get myself worked up, but I don’t think the results were as good. You need to approach things a little more technically.

Apocalyptic as it may be, this record’s pretty damn accessible: there are lots of catchy riffs and melodies, particularly on the back end. How did you know that the time was right to dive in deeper?

That’s something I worked really hard on. If you go all the way back to the first recordings Tombs put out, there’s always been that element of attempting to sing clean. At this stage of the game, I see that as the result of years of practice. There was a certain mood that I wanted to achieve, and I just put my energy into refining that. There are certain emotions that you have to express a certain way, and that [clean singing] is appropriate for that type of expression. It took a lot of practice, more so than the extreme singing. I think I spent twice as much time working on my own demos, like ‘I need to breathe this way; I need to try and these types of notes.’ It was a very trial-and-error kind of thing.

Have you have any formal training, or are you all self-taught?

The only ‘training’ I had was [heavy metal vocal coach] Melissa Cross’ box set, The Zen of Screaming. I think a lot of people use that. Here and there, some people have given me tips on what to do, and I have some vocal exercises that I’ve been given over the years. So I try to follow those directions, but I’m basically self-taught. I’m open to training with somebody; I just don’t have the financial resources right now to do something like that. But I’m always trying to get better, so whatever is accessible to me, whatever I can use make things better, I’m gonna try and do that. If I have the resources at some point, I’d definitely want to learn to sing the right way. [Laughs]

You’ve described your career with Tombs as walking a path that reveals itself as to you as you go along. To that end, what do you know now that you didn’t know when you set out on this journey?

Where you think you’re going to end up is, oftentimes, a very different place from where you actually end up. You shouldn’t always have the end of the line in mind. You should be open to different pathways that will reveal themselves as you move forward. When I started Tombs 10 years ago, I had a very specific idea of what I wanted to do—but over the course of the voyage to get to that place, that led to different excursions to different places, and I was able to follow those and be open to new ideas. That has taken me to a completely different place where I thought I’d be. If you shackle yourself to one idea, a lot of times you cut yourself off to so many other things that could be developed.

That’s why all of our albums have sounded different; there are so many different elements popping up here and there. David Lynch is kind of the same way, really. It’s very dark, but there are moments of beauty, and humor, and all of these other things mixed in with darkness, and that’s how I approach the band.