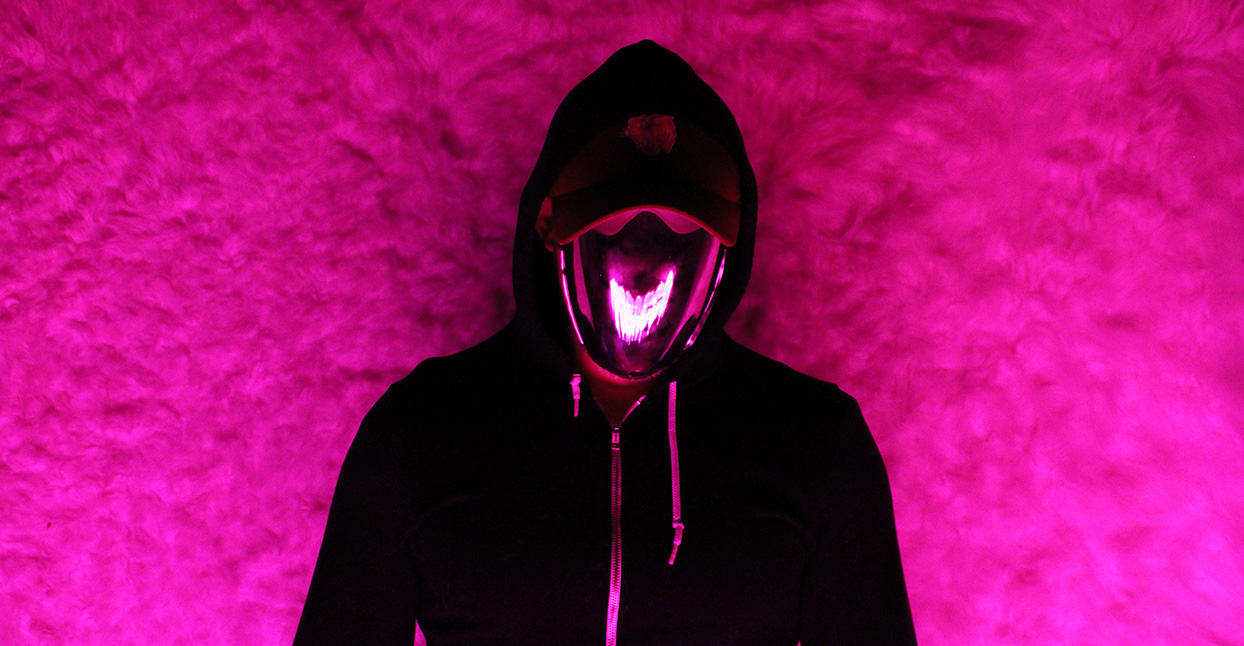 On the surface, there’s nothing especially secretive about Tom Fec. He’s easy to find online, particularly in photos, playing both in his solo project Tobacco as well as the band Black Moth Super Rainbow. He lives in Pittsburgh, a working-class Rust Belt city once anchored by steel and brick. And yet a definite mythology has developed around Fec over the years. Critics write that he’s mysterious and reclusive, because his bands often play with masks on, and because he doesn’t generally talk about his personal life in interviews.

That sense of mystique is due, at least in part, to the way his music sounds. His songs have an ominous air, his vocoded voice sounding like a badly mic’d cult leader, or a B-movie horror villain. On his upcoming album, Sweatbox Dynasty, he recorded every instrument onto a cassette before mixing it into the track, giving it a warble and fuzz. The result sounds like a record that’s been left out on a 100-degree day.

Despite the fact that his music has garnered critical accolades, Fec shies away from the spotlight. He doesn’t want to headline your festival or talk about his influences. He doesn’t want to be part of any scene, or to be pigeonholed as a “psych rock” artist. He just wants to make his bizarre music in peace and play shows for the people who like it. These desires sometimes conflict with the realities of being a musician in the 21st century, who needs to be known to make a living.

We spoke with Fec about what it’s like to be an acclaimed musician who still feels like a music industry outsider, why ‘90s commercials are scarier than anything made today, and how he navigates the analog/digital divide.

For this record, you recorded every instrument onto cassette, then used those recordings to create the album. Why did you decide to do that?

It breathes. There’s an actual breath in magnetic tape. Normally, I usually do everything straight to a sampler. It’s just so clinical. I think that’s the reason some people don’t like electronic music—because it’s so clinical and so sterile and so dry. I just thought the tape was the only thing I could really do to make it breathe, come alive.

In an interview with you from a few years ago, you talked about how you didn’t want to be an analog purist and that, at the time, you were using more electronic equipment. I’m wondering what made you change your mind?

When I first started, people would ask about the kind of instruments I use. Everything was always vintage analog. I kind of got away from that. It’s not really even about the instruments, it’s more about how you’re playing them and how you’re capturing what you’re doing. It’s about that moment when that stuff’s being captured.

Do you feel like you’re a part of an artistic, creative community where you live in Pittsburgh?

I don’t consider myself a part of anything, really. It’s just kind of how I am. I don’t really go to shows, I don’t have any musician friends. Everyone I hang out with does something different. I’m so far removed from that stuff.

Is that on purpose? Why do you feel like that’s the case?

No. I never set out to purposely become an island. I guess it’s just not my interest. I know it probably should be. I guess I’m more interested in what I’m doing. Maybe that’s unhealthy, but most of the music listening and thinking about music I do is specifically about what I’m doing.

In an interview in 2013, you talked about how a record you were doing with Black Moth Super Rainbow was ‘a middle finger to the music industry.’ You said you consider a lot of your work to be in direct opposition to what’s going on in the music industry. What did you mean by that? What part of the music industry are you talking about? What is it about it that bothers you?

I’m trying to remember. The middle finger part of it sounds pretty aggressive. I was probably in a mood that day.

It’s something I’ve seen echoed throughout different things you’ve said. You feel like you’re a little bit of an outsider to that kind of thing.

I think when Black Moth first started getting attention, it was kind of a forgone conclusion with everyone that I talked to—managers and different music people—that Black Moth was supposed to become this festival psych band. There’s kind of a path that was laid out, and that was never the path I wanted to take. When I saw myself going that way, I had to slam on the brakes.

It’s been like four years since the last Black Moth album. On that album and the one before it, we were starting to clean things up and getting a little more, I don’t know, accessible or something. That’s fine and everything, but … I don’t know. The longer I’m around it and the more of these bands that I come in contact with … I’m not going to name names, but man, these fucking festival bands are so corny. You don’t have to be mainstream anymore. Be independent, that doesn’t even mean anything anymore. They’re so fucking corny and I just never wanted to become that.

It sounds like you wanted to intentionally back off from your music becoming too accessible or too easy to like.

Yeah. I think in that regard, I’m kind of my own worst enemy. We’ve had opportunities, and I’ve turned down most of them. When I put an album out, I go one way when we’re supposed to go the other way. Usually when people tell me, ‘All right, this is what you do next,’ then whatever that switch is in my brain goes off, and I have to go the [other way].

Maybe it’s anti-authoritarian streak you have.

I think indie bands, whatever that means, often as they’re gaining in popularity, industry people are like, ‘Oh, well, they’re going to be this kind of band. They’re going to end up playing these festivals to this group of people.’ That seems like exactly what you’re trying to avoid.

Right. I didn’t get into this to be predictable. You don’t know what I’m going to do. When I was a kid, I liked guys like Aphex Twin and Boards of Canada. They just did what they did. There was nothing laid out for them.

People often say that you’re mysterious, but it sounds like it’s just because you don’t want people to see you as someone who is attention-grabbing for the sake of publicity.

Most of the time when I do interviews they bring up the mysterious thing like, “Oh, man, thank you for doing this interview because I read you don’t do any interviews because you’re so mysterious,” because I haven’t put everything out there. Then all these people say that that’s what I am, so that’s what I become.

You often associate your music with visual elements. Your overall aesthetic has an almost B-movie horror quality to it. Other times, it seems like a demented version of pop culture. I’m wondering what about that sensibility interests you?

Especially when I was younger, in the movies and the commercials and whatever else, people were doing these things with a straight face. But when you watch that shit now, it’s so weird.

People weren’t as tongue in cheek in the ‘80s and ‘90s. No one was self-aware. That kind of stuff is so cool to me. It’s so interesting to see.  All you have to do is put my music with it and it shows you that, you know what I mean?

Right. In this older media you’re forced to see the subtext that people were not aware of when they were making it. That subtext is often kind of disturbing, kind of weird.

If you were to make a movie today and try to be as disturbing as you can possibly be, it’s never going be as genuinely disturbing as some commercial that was on at 3:00 a.m. back in the early ‘90s. There’s this face toner masque thing, and it’s horrifying that people used to try to sell that shit. Look it up on Amazon.

I think what I’m trying to explore is stuff that’s so awkward to grasp that you could put whatever meaning applies to you [into it]. You can give anything I make whatever meaning you deem appropriate at the time. Kind of like how, when I used to listen to music as a kid, I never understood the lyrics to anything. You’d make up your own lyrics in your head and then sometimes when you find out what they actually are, it’s kind of a letdown.