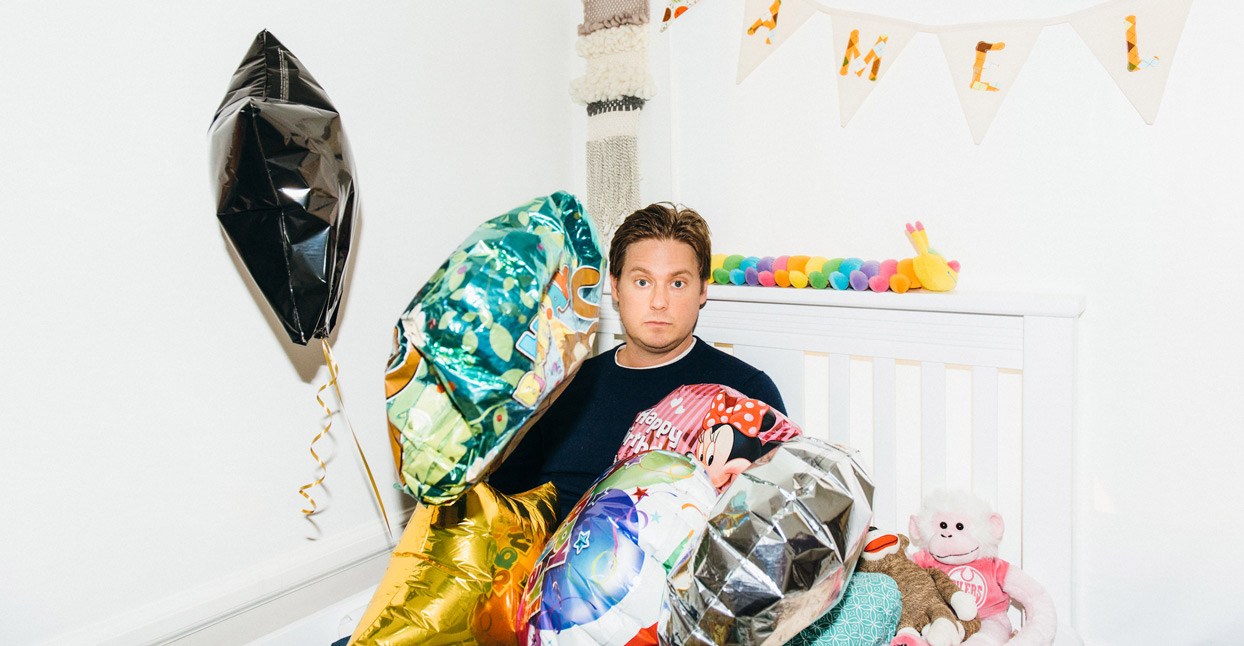 It’s the oldest, most universally understood law of the internet, just behind “Never read the comments” and just ahead of “Never Google a symptom:” Don’t feed the trolls. Like all bullies, internet trolls thrive on attention and negativity—which makes them categorically immune to reason. Empowered by anonymity and distance, they harass their targets with the dim persistence of mosquitoes; should the victim swat back, the swarm grows bigger, nastier, and more reckless, and their noxious life cycle rolls on.

Comedian Tim Heidecker is aware of all that. He knows he shouldn’t feed the trolls. But he still does it from time to time.

“I took kind of a combative approach for a while, just because I think it was important to not just ignore it, and to defend myself a little bit,” he says on the phone from Los Angeles, where he lives. “Or to expose them—like if somebody says something particularly homophobic or racist. And also to show my audience—you know, I have a big audience—that this is out there, and that I think it’s dangerous.”

Heidecker, who is also an actor, musician, and co-creator of several cult favorite shows on Adult Swim with Eric Wareheim—the baffling Tim and Eric Awesome Show, Great Job! and the unsettling and unexpectedly lovely Tim & Eric’s Bedtime Stories—has occasionally summoned the ire of alt-right trolls on Twitter, where arguing for decency and humanity can get you branded a “liberal nutjob” or “cuck,” or some other slur du jour. He also likes to vent on Bandcamp, trolling the trolls with one-off songs inspired by the headlines: the Kavanaugh hearings, Trump’s latest bullshit, the #FuckFuckJerry social media campaign, and others. Most are satire, some are sincere. A couple weeks ago he dropped a sad folk tune about the recent attacks on reproductive rights called “To the Men.”

And while his latest full-length, What The Brokenhearted Do…, is funny in some parts, it’s mostly a straight-up, no-foolin’, heart-on-the-floor divorce record. Taken together, the songs paint a picture of a man trudging, limping, drinking his way through dark days. It’s heartfelt, it’s raw, it’s simple, it’s pretty.

Heidecker’s not getting divorced. He and his wife and kids are doing fine, he says. A couple years ago, some divorce and alimony papers popped up online. That was a Photoshop fantasy cooked up by anonymous antagonists. “I don’t know where it started, probably on 4chan or one of those places,” he says with just a hint of exhaustion. “To them, it’s some sort of insult or some kind of attack to suggest that I’m so weak and liberal and beta male or whatever that my wife left me.” Amused and oddly inspired, he sat down at the piano and started writing.

What The Brokenhearted Do… was informed by a lot of things—past breakups, dissolved friendships, his parents’ separation, a lifelong affinity for ’60s folk and rock—but some credit goes to those toxic internet dipshits who thought they knew how to hurt him. The standout star on the record is surely “When I Get Up,” a catchy rock number about a deeply depressed person. The song keeps returning to its comfy, vaguely Harry Nilsson-esque chorus just as its protagonist keeps going back to bed, hoping to escape into a dreamworld where the unnamed “she” still loves him. It’s pathetic, but so very easy on the ears.

The hits keep on coming for our hard-luck hero: the stripped-down “I’m Not Good Enough”; the painfully insistent “I Don’t Think About You (Much Anymore)”; the nearly rockin’ “Coffee’s Gone Cold.” In the bitter country power ballad “Funeral Shoes,” our numb, humbled narrator makes a pilgrimage to his hometown of Allentown for a funeral: “I’m gonna take the next flight out of here / Gonna go back to the sunshine / Won’t come back east till another one bites the dust / This place that Billy Joel sang about / Means nothing to me anymore / Only a memory, just a pile of rubble and rust.” Harsh, especially once you remember Heidecker grew up in Allentown.

“I maybe regret shitting on them at the end a little bit too hard,” he says. “When my mom heard it, she was like, ‘What’s your problem? It wasn’t that bad, was it?’ No, it’s not that bad. I’m making it up. I’m trying to make a song here.” As with a lot of these lyrics, it’s up to the listener to decide out how much narrative distance to grant the songwriter. On one hand, the song feels like it’s coming from a place of emotional truth. On the other, well, it’s all built around that made-up divorce conceit.

“I’m drawn toward thematic albums or concept records—things that kind of have their own little internal story going on,” Heidecker says. He and producer Jonathan Rado, of the band Foxygen, attempted to give the album a loose narrative arc in its sequencing, its sad-sack protagonist arriving at something like doomed acceptance by the time we get to the last line of the last track: “Life’s too long to stay in love” (sung three times in a row). Divorce records are an established subgenre, though Heidecker might be the first artist to lie his way into it. “The big ones are the best ones that I know of,” he says when asked to name his favorites. “I’m a traditional rock, classic rock, singer-songwriter guy. But certainly: Blood on the Tracks, Rumours, and Shoot Out the Lights.”

And what does his wife think about all this?

“Um. She’s cool with it. I played her the demos awhile ago without really explaining too much to her, hoping she’d just kind of not read too much into them. She liked them as songs,” he says with a laugh. He’s since clued her into the theme and she’s on board. One assumes she puts up with some pretty weird stuff being married to Tim Heidecker. “Yes, she does. She’s a silent warrior, standing beside me, putting up with my crap.”

We asked Heidecker to give us the backstory on seven tracks from his Bandcamp page.

I don’t know if the full story ever came out on this, but [Trump] doesn’t seem to be as tall as he is saying he is. Which is such a stupid thing. I don’t look at the news every day and try to find something to write about with him, but when something does spark my brain, it’s like, ‘Well, this is a nice sort of reflection of how he sees himself, and sees the world—and how people should see him.’

“Tobin and the Judge”

I wrote ‘Tobin and the Judge’ backstage at one of the On Cinema [Heidecker’s podcast/web video series] shows. We were on tour and listening to the Kavanaugh hearings in the car, and all of us were rapt by that. We were just talking about how there’s so much material there, with all the calendars and the drinking, and the spring break. It was just dripping with imagery and detail.

We tracked the original version and I liked it a lot, but then I was playing around with a tape echo machine in my garage and was like, ‘Gee, that sounds a lot like Nebraska, when you mic it right.’ I was just playing around with it, trying to zone in on that Nebraska sound.

Oh, that’s a controversial one, because people interpreted it as being this pro-war song, and it was really specifically about Trump saying there’s no point in being in Syria because ‘it’s all sand and death.’ And I said, ‘That’s such a great lyric, such a great line.’ And the lyric really is about this guy not listening to generals, not listening to anybody’s opinion, and just saying there’s no point in being there, feeling like the only point to being in military conflict is for some kind of spoils or plunder. I’m not, like, a super huge policy guy when it comes to the military. I was trying to hone in on another specific flaw in Trump in that song.

‘For Chan’ was really right out of the middle of the battle with the 4chan people. Another folk song. I wrote that because I was doing a show that night, and I like coming to shows where I’m gonna play something new. I just tried to get in the head of those people, as I try to do, and not always in the kindest way. I just go, ‘Well, most will people understand.’ It’s not the gospel I’m putting out here.

‘Q’ is about, you know, the Q conspiracy, and this idea that the conspiracy people were sort of fun and cute, and—as everything lately has done—it’s turned dark and dangerous. I just took it from this place of, ‘What happened to you, you used to believe we didn’t land on the moon and Elvis is alive.’ But I’m pretty happy with that [song] because I made that one myself, played all the stuff. Not a lot going on, but it reminds me of a very ’60s pop sound that I always try to aim for but usually don’t get.

“Our Values Are Under Attack”

That was written for Decker [Heidecker’s action-comedy show on Adult Swim]. We wanted a scene where Decker sings this patriotic song. I recorded that myself, I think. I just layered in a bunch of loops and drums and tried to get this ‘Born in the USA,’ anthemic, heroic song. I’m pretty happy with it. We sing it on tour, and it’s the kind of thing where you can get everybody to sing along, although it’s very, very stupid.