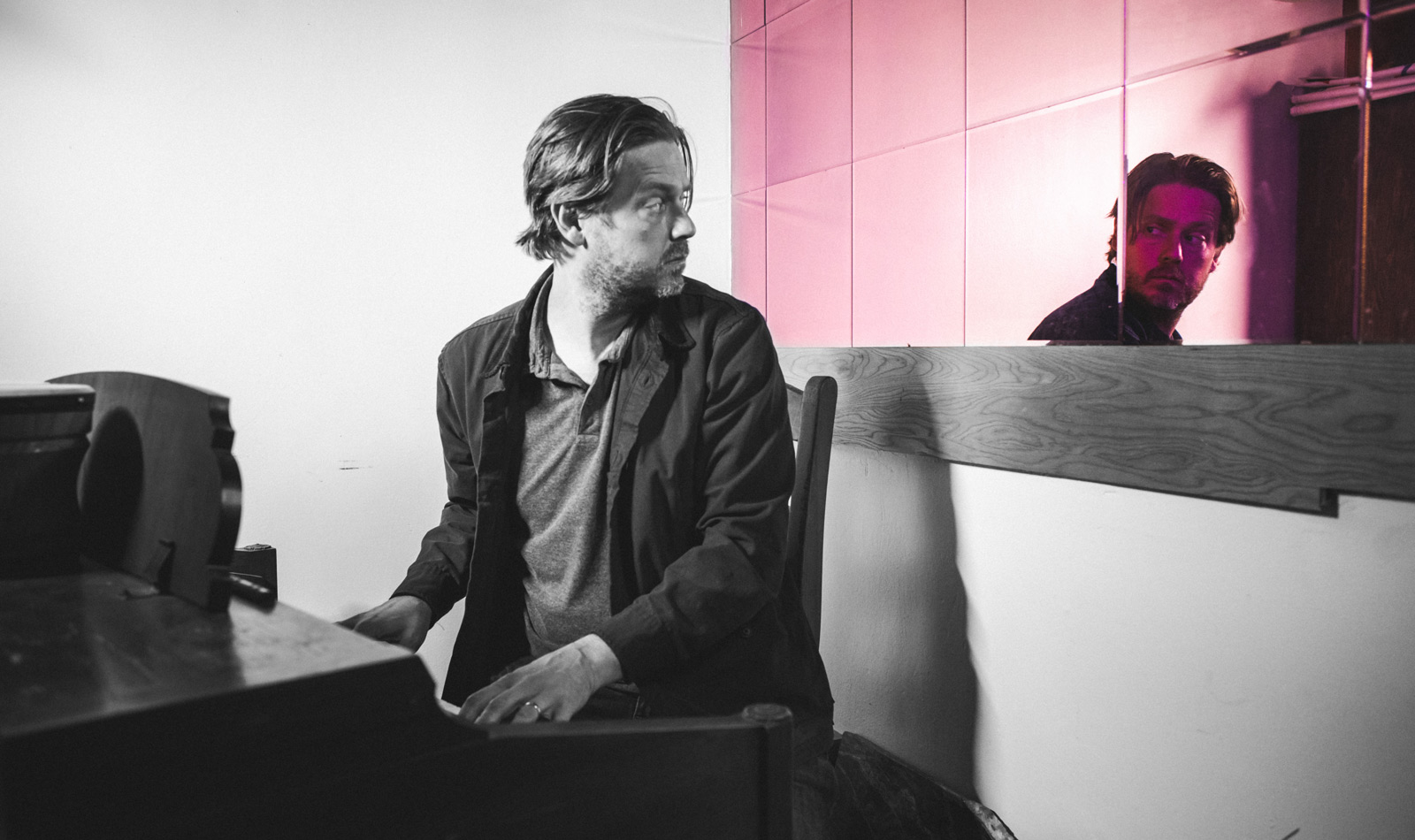 Tim Heidecker seems like he’s always in motion, always juggling multiple projects at once. There’s the surreal universe of On Cinema, his multimedia project with Gregg Turkington; his weekly call-in show with Vic Berger and DJ Douggpound, Office Hours; his standup; his acting; his appearances on other podcasts—and his music. He’s averaged putting out roughly a record a year since 2016. “It’s boring, but it’s just scheduling,” Heidecker says, describing a creative process that has, like most, both bursts of intense productivity and fallow periods. We’re meeting over Zoom in the afternoon; he’s spent the morning, he says, having a planning meeting for On Cinema’s next season.

While his projects don’t all overlap thematically (and that seems very much on purpose), they all call for the same kind of care and thoughtfulness: “I think they all require a bit of checking in with myself,” he says. “How is this evolving? How is this growing? What haven’t we done?” That makes sense, considering the richness of each project, from On Cinema’s expansive, constantly self-referential detailing to the lush instrumental arrangements of his music. His latest album High School is a tender and tart ode to growing up. (While his music has always had a bit of wryness and wit to it, High School—and most of his sonic oeuvre—is decidedly not “comedy music.”)

On 2020’s Fear of Death, a collaborative effort with Weyes Blood’s Natalie Mering and a number of other notable L.A. musicians, Heidecker explored loss and mortality. High School seems like the flip side—it’s all about growth (in all of its awkwardness and uncertainty) and potential—adult life just beginning. That’s mirrored in Heidecker’s approach to the music, too. “This one started feeling like I wanted to make a counterpoint to the Fear of Death record sonically, in terms of not as many bells and whistles,” he says. “It’s not as sonically big or lush or live-sounding, which I think is great. I was like, ‘The smart move is to do almost an acoustic record, a small record, like Tunnel of Love or Full Moon Fever or something,’ which is almost like a garage record.”

Heidecker’s penchant for ‘60s and ‘70s-style pop runs all the way back to, well, high school; on an episode of NPR’s World Cafe recorded around the release of Fear of Death, a demo from his high school band seems very much of a piece with the music he makes today. Unlike his partner in Tim and Eric, Eric Wareheim, who came solidly out of the same ‘90s mid-Atlantic punk scene I’m from, Heidecker has always been a guy who wore his Beatles/Beach Boys love on his sleeve. It’s pretty charming to listen to that demo and then observe how those seeds have grown over the years into the sweet hooks of tracks like “Get Back Down To Me” and “Chillin’ in Alaska.”

“We always play on our podcast the drop from Brian Wilson saying ‘I love pretty music’—that’s pretty much it,” Heidecker says. “I love harmony. I love melody—catchy tunes. The other song that came up on that [World Cafe] playlist was ‘The Pretender’ by Jackson Browne. It’s just like a warm blanket, that whole era. It feels very organic; that was a moment in time [when] those people were all in a room playing music together. It’s also very intimate. I’m hearing this person sing about where they’re at right now in their life. It might not be fully literal; it might be like a little short story, or it’s a memoir of a moment.”

That wish to capture a moment across time is evident throughout High School. The first track “Buddy” starts with a sample from a recording of Heidecker’s parents, presumably, speaking to him as a child—”Timmy Heidecker, sing your song!” It was inspired by Heidecker’s own experience as a parent, which he developed into a poignant reflection on the act of looking back itself. “I often call my son, who’s five, ‘buddy.’ And that word was just running around in my head,” he says. “I started to think about, well, who would I be thinking of? I started thinking about people I kind of lost touch with, people who—I wondered how they managed to get through these last few years.”

High school was a pretty standard affair for Heidecker—he went to a Catholic school in Allentown, Pennsylvania—and he was clearly on the performing arts track from the beginning. “I had a closed-circuit morning TV show during homeroom, the first 10 minutes of the day. It was the news and the weather and the announcements and stuff,” he says. “And so I got in that scene, me and a few friends, we were able to put on a show every morning for a little while. That was fortuitous, and a good way to get stuff out.”

Throughout High School, there’s a sense that Heidecker regards his young self with gentleness even as he reflects on the solipsism of looking back itself. “I’m 46 and I have some distance from that period of time, and I can look back without so much cringe and without so much—you know, not wanting to not think about those times even though they weren’t necessarily bad, just awkward and unremarkable,” he says. “When I started thinking about it and recollecting and thinking about the things that I was interested in, I see that shaped who I am.”

Ever the planner, Heidecker isn’t lingering in nostalgia, though; he’s on to his next project soon. High School’s been in the pipeline for a while, due to the realities of present-day vinyl production. He’s loved the process of putting it together, working with Eric Johnson of Fruit Bats, who he describes as an “album sherpa,” to add the last sonic details—“some extra percussion, some background harmonies, some extra guitar things”—to make it sound just right. What’s to come? Hard to say, but he’s considering a musical. “That might turn out to be a dead end,” he says. “But, you know, you start with a little bit of grain of an end product and then figure out how to get there.”