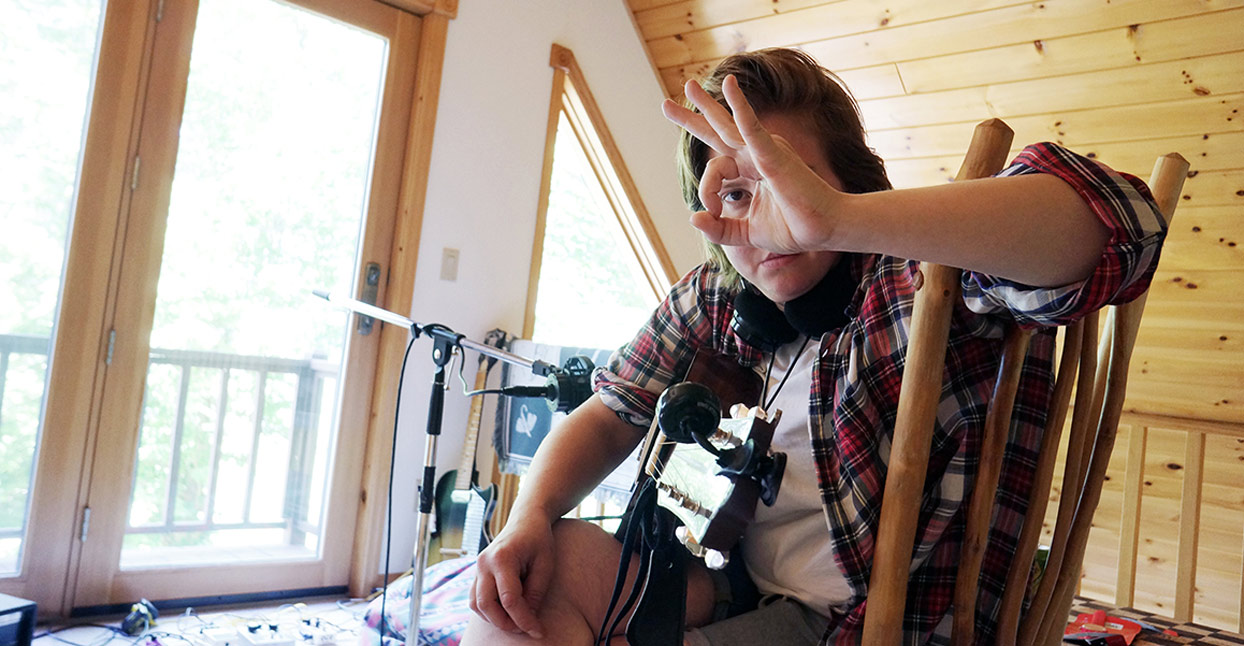 Tica Douglas begins Our Lady Star of the Sea, Help and Protect Us, a parallel exploration of Christian theology and gender identity, at a book reading. The atmosphere is tense: “I went to your reading last week,” Douglas sings in their tiny, whispery voice, “All your exes were there.” Just as Douglas begins to make awkward small talk, the scene melts away, dreamlike, and the setting suddenly changes: It’s mid-afternoon, and the conversation has shifted to spiritual matters. Douglas’s friend is asking them about the afterlife: “I know you’ve been asking those questions we ask,” Douglas sings, “of the dead when they go / Like ‘What did you leave here, for me to believe?’” Before Douglas can answer, the scene shifts again, and this time the subject moves from the spiritual to the personal: “Now that you love someone, you love me again,” they sing. “I think that’s beautiful baby / You love me because you love him.” The net effect of the three sequences is enigmatic and unsettling: Are the events of the song a dream? A memory? Some middle ground between the two? The only thing that is certain is that in a brief three minutes, Douglas has shifted from the concrete to the ephemeral to the emotional, and has invested all of them with equal weight and value, asking questions that may not have answers.

This shifting sense of time, place, and being persists for the entirety of Our Lady Star, a record that is set in the physical realm, but is preoccupied with the spiritual and is dedicated to exploring the liminal space between the two. Its title is taken from the inscription below a statue of Mary meant to keep a small town in Louisiana safe from hurricanes—natural forces and spiritual mysteries entangled in a single spot, on an immovable concrete saint. It’s a plurality that’s central to Douglas’s songwriting.

“One really effective way of approaching the spiritual is through the human experience,” explains Douglas, over beers at the Brooklyn bar Broken Land. “When I describe certain scenes or situations, I’m careful. I don’t write details unless they lead to some kind of thought about something more fundamental.”

It might be a stretch to call the songs on Our Lady parables, but all of them grew out of Douglas’s studies at Union Theological Seminary, where they are pursuing a Master of Divinity. Like parables, Douglas’s songs are full of specific, recognizable details and, also like parables, they can mean a host of different things at once. The moving, lullaby-like “Deaths Come in Three” feels like a rumination on both mortality and the inadequacy of language. Halfway through the song, en route to a funeral, Douglas casually drops the line “my phone was dead” and, in the midst of a song about actual human death, ascribing that same characteristic to an inanimate object feels fraught with meaning. In the quiet, crawling “Habits + Rituals,” Douglas warns, “You always miss something / As soon as you’re sure.”

That line could well serve as a grand unifying theory for the record. Throughout Our Lady, Douglas shrugs off the idea of certainty, preferring instead to burrow into the grey areas. Paired with Douglas’s studies in theology, the album feels like a reclamation of the obscure: At a time when American Christianity has become obsessed with turning a religious text that’s loaded with poetry and mystery into a scientific instruction manual, Douglas is presenting another, more beautiful option: believing in uncertainty, and allowing for the fact that two things can be wholly and simultaneously true.

All of this is central to who they are. Douglas identifies as non-binary, and was drawn to theology at a young age, when they first began to experience dissociation from their biological gender. “I wasn’t raised religious,” they say. “When I was really young, maybe six or seven years old, I was very aware of the fact that I ‘felt like a boy.’ I was one of the lucky ones who had a mom who told me that was a good thing, and that I was made special. And that was the moment of inception for my theology. I believe that there is a God who made me special, and if God made me special, then God made everyone special in their own way. I was tethered to God, like a lifeline, in a very childlike way.”

As they got older, their questions about God began to grow, and majoring in religion in college led to a fascination with the Bible. “It covers everything,” they say. “It covers history, it covers sociology, it covers literature, it covers questions about the Ultimate Whatever.” Burned out from the endless cycle of self-promotion involved with their 2015 album Joey, Douglas applied to Union after writing a college thesis on Union alum Dietrich Bonhoeffer—who is known as much for his theological work as his plot to assassinate Hitler.

And while Our Lady isn’t an explicitly religious work it is, to borrow an old Christian expression, “God haunted.” “Weightless” is a heaving, cathartic portrait of a person finally learning to release their pain to the ether; “The Same Thing” finds the face of God in “comatose commuters.” The songs throughout are almost heartbreaking in their tenderness and beauty: most of them consist of little beyond Douglas’s bone-brittle guitars and voice, fragile as porcelain, and the melodies bob slowly, like paper sailboats on a lake.

“I just wrote a paper for my Literature of Lamentations class,” Douglas says. “The paper was about whether the Book of Lamentations was a cohesive religious argument, or whether it was just the fragmented cries of a person who had lost everything. And I felt that it was the latter, but that regardless of the intentions of the author, it became a cohesive religious text because, in its hope and despair and joy and sorrow, it mirrors the human experience. I didn’t go into writing this album thinking, ‘I’m gonna paint for you the human experience,’ but I do think that just by telling you some mundane detail about, say, my friend’s reading, it can mirror your own experience.”

What Our Lady is after is a subtle but radical reframing of religious discussion, one that rebukes the drive to use the Bible as a law book or science text. “I was in a class on the Koran,” Douglas says, “and one of the approaches interpreters take is to look at a verse in the Koran and think to themselves, ‘This is a patriarchal, really sexist thing,’ and to recognize that as a specific moment in time. But then they ask, ‘OK, well, what’s the value behind this?’ So if the passage is about fighting, you look at the context, from that context you can derive values that you can then move to our current context, without all of the other baggage.”

And so when Douglas describes Our Lady as an exploration of, “the ways in which queerness and being non-binary can open up routes to different kinds of meaning-making, and to realms of sacredness,” it makes total sense. Because religion, at its core, should be about mystery and uncertainty and fluidity. The Bible is a book in which “both”ness happens all the time—the bush through which God spoke to Moses was “burning, but not consumed;” Christ himself was somehow simultaneously fully God and fully human (as Douglas puts it, “Jesus was non-binary”); the voice of God is described as both “a gentle wind” and capable of leveling forests. To try to make the Biblical text “either/or” instead of “both/and,” or to try to strain its language to conform to the strictures of literal, word-for-word truth, is to rob it of all of the things that make it beautiful. Our Lady is about finding God at a friend’s reading, or in a statue erected at a Louisiana harbor.

“I’ve always existed in a middle space,” Douglas says. “And so my theology is a theology of uncertainty. It’s an intentional openness—of not knowing, of leaving room for understanding that people come from different conditions and experiences, and that their reality is their reality. Certainty takes out of the equation what’s so alluring about religion, which is mystery. It takes out the mirroring of the human condition, which does not have much certainty in it. Whether you’re a religious person or not, everyone likes a neat reality. It’s much easier to function. And I think that’s where we get so much of the binary logic that we have. But it’s a hugely damaging impulse.”

Our Lady is a welcome counter-narrative to that obsession with tidiness, a prayer for safety whispered to an unknown God that you’re not sure is there, but that you cling to like a lifeline. “Life is messy,” Douglas concludes. “Neatening it isn’t just reductive. It’s damaging.”