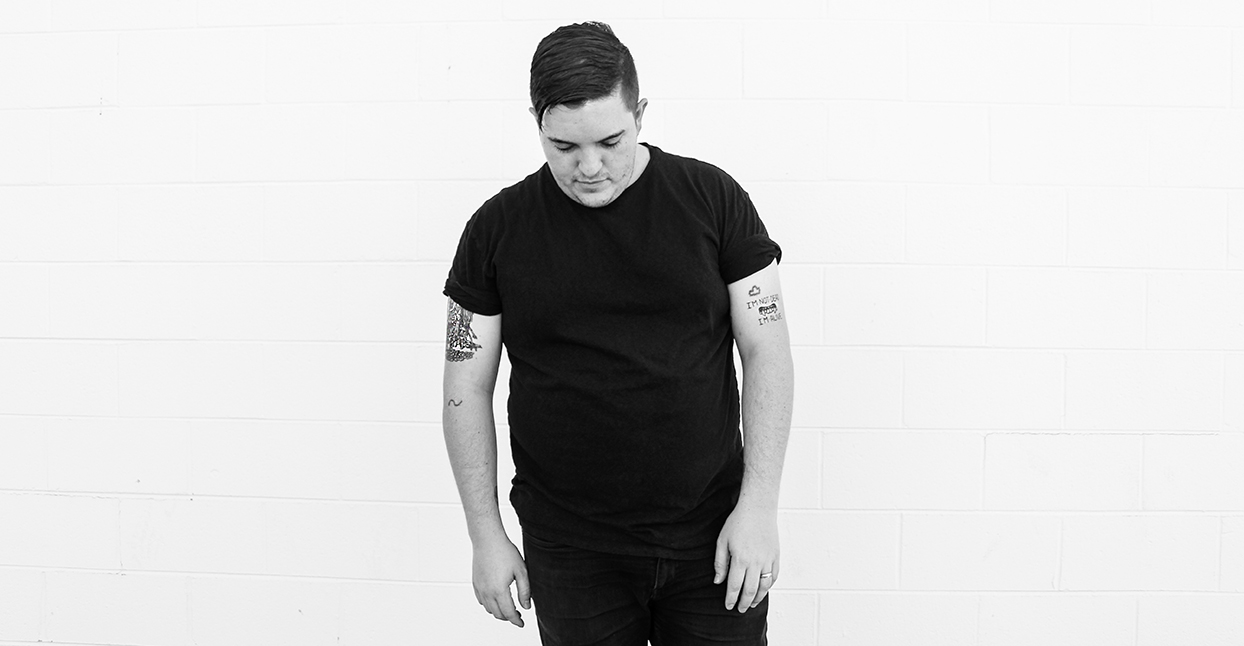 With an equal love for music hardware, technology, and science fiction, the Denver producer Thug Entrancer has forged an innovative style of house music that recalls cyberpunk classics like Blade Runner or Shadowrun. Although his music is fast-paced—taking some inspiration from Chicago’s juke and footwork scene—the ambience surrounding the high BPMs paints a gloomy picture. That feeling is further illustrated through his videos, with visual art that captures a vision of the future colored in psychedelic shades of black and white.

His music focuses on a distant—and possibly dark—tomorrow, yet Thug Entrancer’s perspective doesn’t feel too far removed from the present. In a country where both technology and cultural tension seems to grow at a rapid pace, the producer wants his music to remain progressive.

We reached out to Thug Entrancer to discuss the transition of his cyberpunk sound, from his debut project Death After Life to his latest release Arcology.

How did you come up with the name ‘Thug Entrancer?’

It was kind of a homage to rap music. Coming up, that was always a huge influence on me, and it was also tied in with sci-fi or cyberpunk narratives like, without getting too heavily deep into it, RPGs like Shadowrun. The idea of a thug in that realm is like being an outcast that is sort of working to counter-government forces. I really dug the contrast of it, like the fact that you’re playing in a club of hacker-type people who are actively working to like counter oppressive forces, and that’s like a romantic nod to it. It was kind of where my head was at with it all.

What inspired you to go the route of making music?

It’s been something I’ve done my whole life. When I was a kid, I used to play video games and dig into the soundtracks. There used to be this game called Mario Paint on the Super Nintendo; it was like a graphic creating program. They had a little composer program within that program, and I just remember hanging out and creating drafts. They weren’t worth anything [laughs], but I’ve always been kind of gravitated towards it. A lot of my big influences kind of come back to a lot of urban music, like late ‘90s rap production like Cash Money and Mannie Fresh. That world, I think, opened my eyes to drum machines and synthesizers. I just kept researching from there and picking up on musical cultures. Those are just kind of my roots. I’m classically trained as well; I played violin and stuff, which was cool, but I’ve always been kinda infatuated with electronic music and the subcultures that create the music that we listen to.

So you’ve stated your focus on drum machines, and while reading your story on Thump, I’ve found out that hardware and technology plays a significant role on your projects.

I know you moved to Denver from Chicago, and while listening to you music, you can hear an influence from the city’s footwork scene. How did Chicago’s music scene influence your music? Didn’t you originally go there to develop your sound in free jazz?

Yea, so (in a nutshell) I was born and raised in Denver, and it’s probably the DIY scene and the Warehouse scene. We don’t really have much of sort of a trademark style, but there is a lot of electronic music that happens out here. When I was moving to Chicago, I’ve up on footwork before I moved out there, but I was kind of interested maybe because it was experimental from its roots, and I think it crosses a lot of boundaries and genres. In terms of it influencing me, I really wanted to work with the BPMs and framework, but I think inherently the way I work isn’t really how the Tek Life guys work. Those guys put out so much music, and they just collaborate through samples and it’s a whole style and subculture of work, it’s cool man. But, I think I’m informed by it.

In terms of free jazz and stuff, I performed out in Denver with a couple improv groups, and at the time, I was using live modular synths alongside some drummers and a guy that plays trumpet. I wanted to go to Chicago to explore that more, it’s such a rich scene of jazz and free jazz out there. But, I kind of went to Chicago to slap me in the face a bit. I moved out there with this idea of footwork, and slowly discovered house music. I’d go to a local record store, Hyde Park Records in the Southside of Chicago, pick up a bunch of records (they were super cheap), and just kinda dug in from there. House music really informed me even further into this whole embryo. I guess it goes back to music technology and drum machine synthesizers, you know.

Your sound could be implemented in games like System Shock or Shadowrun, even Alien Isolation. Very groovy, but still dark, with emotion that would make you want to unravel the levels beneath your tracks. What motivates you to produce that style of music?

I think a lot of it comes from social confusion of like loving and listening to industrial music, but I also love rap music and I was trying to find the meaning between the two things. I think on the surface, that’s where I come from, but I think my music was consolidated into late night, warehouse, sort of party situations, where it is kind of dark and heavy. I come from a pretty isolated place in life and that makes a difference. When it comes to the footwork producers, they have such a broad community, and so many identities put into their tracks, where I’m like up at 3 in the morning in my basement making tracks.

I don’t feel like much of a dark person, but I do feel like I’m a dude that process a lot of my viewings of the world through my music and art, so maybe it reflects our temporary political situation. I don’t know, it’s so inherent to me how I make this kind of music. I don’t think I come with this intention like, “I gonna make a dark track to fuck people up,” I just want to make something creative and intuitive and real [to] me. I think I’m on auto-pilot when I create a lot. I have general ideas but I think there’s more like a vibe or a feeling when I make a track, but I don’t want to enter too much narrative.

What made you want to transition to kind of freeing yourself more for Arcology? What pushed you to go with that vibe more compared to your first project?

I feel like Death After Life was so intentionally minally and rigged. I would come across an idea, but I would keep myself from being influenced and keep it from entering itself into the record where, I guess from Arcology, I kinda got a little space. I think, too, that I don’t want to repeat myself, which is kind of like a blessing or a curse because I feel like as you progress, you hit these weird walls you sort of create, so I knew I didn’t want to make another Death After Life. I knew I could but, I didn’t want to do it. I wanted to go as far away from that as possible. That’s what kinda brought me to Arcology and it was also a visual collaboration with Milton Melvin Croissant III, who made all the videos for the record. He and I’ve been long-time friends and I really wanted to collaborate something in full scale. I think his influence on me was very helpful enough to bring out the sort-of new style, new sound, and I was taking new visual references from him to create all the songs off Arcology.

How will you progress your sound and continue to unravel its layers in the future?

I feel like if you put Death After Life next to Arcology, you can probably convince someone they weren’t of the same lineage, where I sort of view Death After Life as the beginnings of the sound. All of the elements are on Arcology, they’re just expounded upon. That’s where I feel beneficial as an artist. I don’t feel very bound to one style to make, I feel like my next record could be ambient or something. It all depends on how I feel at the time. My approach allows me to reflect what I did, what i would do different, and what I don’t know yet because I feel like there’s a whole unknown that I just want to apply my music. I want to dig into the sound of Arcology for the next record, and like really stretch out a lot of those textures and rhythms that you hear, you know?

So, recently, news emerged that you were donating your proceeds to Black Lives Matter. What was the moment that motivated you to do it?

I’m trying to talk to them about getting a piece of that donated and putting up my own money, you know? The political narrative of what’s happening in our country is totally removed from art and music right now. I feel like artists and musicians sort of have a responsibility to speak out. I was like “you know what, I don’t know what I can do, but at least I can do this.” Like at the very least, I can try to get money and donate it to these causes. But I’m giving my proceeds from the album, because to me, it’s like a conflict because I feel like I’m excited to be talking about this stuff and wanting to have these conversations between artists and musicians. But on the other hand, like I feel that’s what we need to do. I don’t need to be given recognition for doing his or anything like that. I’m not making money off my own records personally, but I feel like we have to do something, and that’s just an easy first step.

There is this political thread to every thing that I do, and I feel like if I get any attention for what I’m doing, if I can put that back and making a better impact, I feel like I can’t say too much. I don’t want to overstep my boundaries, especially with the #BlackLivesMatter movement, because a lot of that change did come from black voices. I feel like that should be where we hear everything, but as a white male, I gotta figure out how to align with this.

I’m doing it because I have a two-month old, and I can’t live in a world where shit happens to people, man. When I was on the Southside of Chicago, I’ve seen how poverty and segregation are very real things, and it devastates lives. The kids in Southside Chicago don’t have the same opportunities, straight up. It’s just there’s two different ways of experiencing our current climate. There’s no binary, it’s not like 100 percent this away or that way, but generally speaking, the poverty and economic disparage is pretty racially motivated.