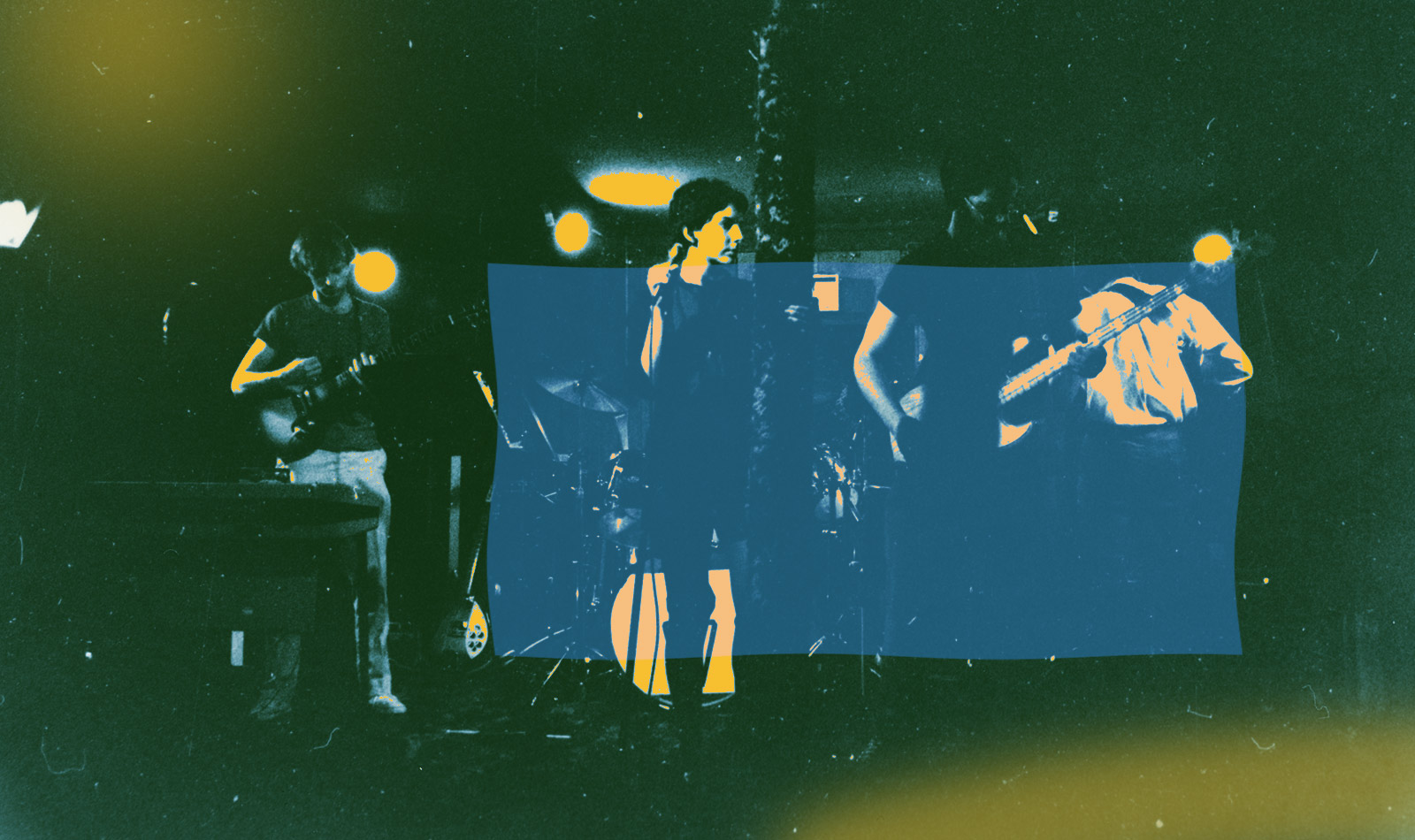 Given the endless string of post-punk reissues over the course of the last two decades, it’s easy to feel like every last corner of the genre has been unearthed and explored. That’s what makes The Stick Figures so astonishing. For the past 40 years, the Tampa, Florida quintet’s sole release—a four-song EP from 1981—has escaped the attention of even the most ardent post-punk enthusiasts. Pittsburgh’s Floating Mill Records aims to correct this with the new compilation, Archeology, providing a new obsession for fans who have worn out their records by Delta 5, Y Pants, and The Fire Engines.

The Stick Figures first came together when its members were students at the University of South Florida. Following the dissolution of their previous band, The Art Holes, guitarist Bill Carey and bassist David Bowman sought new collaborators. Bowman’s 15-year-old sister Rachel Maready Evergreen filled the lead singer slot, while guitarist Sid Dansby invited his brother Robert to be their drummer. Early gigs saw them billed as The Jetsons, before a proper band name coalesced.

“We were fairly inept when we started out, because we didn’t have the drum stool filled by someone who could actually keep a beat,” Carey laughs. “When we got around to making a record and Robbie joined us, we used the name of a performance piece that Dave and Sid had done called ‘Two Stick Figures.’ Back then, we did a lot of art and music performances that were more like ‘happenings.’”

In summer 1978, Carey traveled to England for an exchange program that allowed him to catch formative shows from The Clash, The Jam, and Patti Smith—artists he could only read about back home. Returning to Tampa with the spark of inspiration, he began seeking opportunities outside of the city’s nascent punk and power-pop scene in a valiant attempt to expand the band’s audience.

“We would go to some dive bar that was full of drunk rednecks,” says Carey. “There would be 10 people in the bar and a big back room. We asked if we could bring our own equipment on a Friday night and not charge the locals.” On some nights, this tactic pulled in as many as 100 people—until things inevitably got out of hand. “At some point, the locals would start hitting on young women at our shows. There would be a punch-up, someone would pull a gun, and then we’d have to find another bar.”

Because they didn’t simply play rote covers of songs like “Brown Eyed Girl” and “Margaritaville,” The Stick Figures already stood out from most other Florida bar bands. Their sound was scrappy and frenetic, with gang-chanted vocals and riffs that jut out at odd angles, like twigs poking through a plastic bag. Citing influences as varied as John Cage and Parliament/Funkadelic, The Stick Figures integrated violin, xylophone, and guitars treated with alligator clips into their music.

That restlessness is reflected in “Ellis Otivator Dub,” by far the most experimental song on The Stick Figures’s debut EP—a feverishly paced tape piece made from samples of their unreleased song “Elevator Shaft.” “It involved me playing slide guitar on my 12-string Rickenbacker while everyone else made crazy noises,” Carey chuckles. “It was a live favorite.” Bringing their tapes to USF’s electronic music studio, they rearranged the song’s elements and added synths before creating their own version of a dub mix. “Usually you think of dub as having that loping, slow groove,” says Carey. “Ours is anything but that.

To accompany the release of Archeology, Carey and drummer Robert Dansby teamed up to create their first collaborative project in four decades. “Ellis Otivator Dub 2021” is a sequel that expands the original piece to three times its length, slowing the tempo to an oozing groove while adding a slightly more traditional structure. “We had all of these multi-track tapes with Dave, Rachel, and Sid on them,” explains Dansby. “At one point Bill suggested adding a chorus. I was skeptical at first, but in my opinion it ended up making the song.”

After earning the support of influential BBC DJ John Peel, and landing opening slots with The Fall and Lounge Lizards, The Stick Figures relocated to New York in 1 b 981. Though they had been offered a full-length release from the UK’s Glass Records, the youngest members of the group—who had put their degrees on hold—succumbed to the difficulties of being broke. Within a year of their move, bassist David Bowman returned to the Sunshine State, effectively ending the band before they could truly get started.

In the years that followed, The Stick Figures’s members continued to put their musical talents to good use. Robert Dansby now makes soundtracks for art films, while Carey produced an album for Bowman’s project Nothing But Happiness in 1986, eventually resulting in his own signing to Glass Records.

However, Carey remains best known for giving My Bloody Valentine’s Kevin Shields the Jazzmaster guitar that he used to develop the sound of shoegaze. When he moved to London in 1986, Carey’s band Crash opened for MBV in Manchester. After lending Shields his guitar and a tube amp, they became fast friends, with Carey landing a job as MBV’s roadie for their tours throughout the early ‘90s. “His whole Jazzmaster thing came from me buying a guitar at a trailer park in Tampa for $125 that I played in The Stick Figures,” Carey says. “When he recorded ‘You Made Me Realise’ he was using all of my gear.”

Though they never became as famous as MBV, Carey has no regrets about The Stick Figures’s place in post-punk history. And while other labels have reached out to him about a reissue (“I’m kind of the primary contact because I actually have a Discogs page,” he laughs) he’s happy to put the band’s music in the enthusiastic hands of Floating Mill Records’s Cullen Wells.

“I know Cullen is just starting up but it seems like he’s really excited to do this,” says Carey. “He has the same kind of attitude that we did when we started. We didn’t do it for money back then, and that’s the same now. I’m just happy someone wants to do a good job with it.”