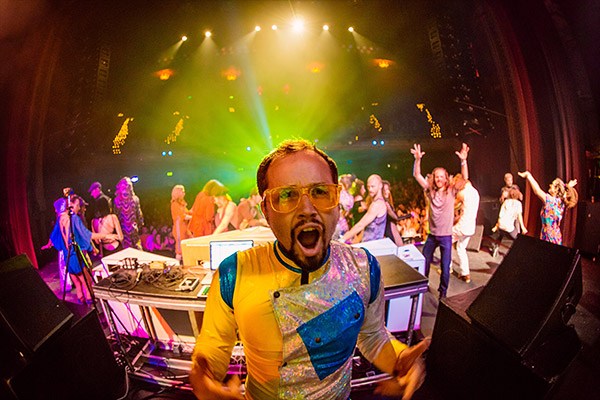 “I feel like the mountains and the natural environment taught me more than school, in some ways. So I have a respect and reverence for this planet, and for myself, and I want to do my part—albeit a very small one—to get people’s hands in the earth.”—David Sugalski

David Sugalski does not hold an appointed position, as his stage name The Polish Ambassador might suggest, but the producer and DJ is somewhat of a diplomat. He plays to two main constituencies that seem incongruous on the surface: The hyped audiences that dance and sweat to his eclectic, hip-hop-influenced beats in large clubs and massive electronic music festivals, and the Earth itself. In 2014, he embarked on what he dubbed “The Permaculture Action Tour,” combining performance and ecology. Sugalski’s network of Action Days projects harness the manpower of concert goers and encourages them to participate in environmental projects such as reforestation projects and planting gardens.  The tour was a big success, in part, Sugalski says, because open-minded electronic music festival-goers could wrap their minds around his announcing, “Hey guys, thanks for coming out to the show. The afterparty is in a garden down the street.”

The Polish Ambassador’s music remains celebratory and relatively free of direct calls-to-action, but his new album, the highly collaborative Dreaming of an Old Tomorrow, mixes his zanier impulses with heady and somewhat psychedelic fare. Unlike his synthetic early music, Dreaming sounds like an album that was grown rather than built. That sound is evidence of both Sugalski’s new touring paradigm and his generation’s increasingly urgent search for meaning in the age of environmental decay.

You’ve lived in Pennsylvania, Colorado, Illinois, and California. What effect do you think living all over the country has had on your music?

I guess, a realization that within what we call this one country, there’s culturally five or six countries. I guess what I would hope is that I’m making music that appeals to a broader range than your average electronic music artist, you know? I think there’s a pop sensibility in the music I write that I hope can find its way across the borders of those different countries within this country.

There’s an organic sort of global influence in your music, as well. Where does that come from?

Being on the West Coast, it feels to me that there’s maybe a bit more of a progressive environment being created for the experimentation of electronic and acoustic music together. That whole Burning Man vibe: There are drum circles everywhere, and this hippie renaissance is sort of happening in San Francisco and Portland. But I think another piece is just age and maturity. I’m 35 now. When I was 22, I was just so excited about making sounds that no one had ever heard before. If you listen to my early work, it’s all synthetic, because the music I was listening to was all synth and techno. As I’ve gotten older, I’ve thought, Oh, actually, I don’t want to go and dance for three hours straight anymore. I want to go to a nice concert that makes me dance, but then it takes me down and I can chill a little bit and introspect a bit on the music is happening.

But your shows still seem pretty sweaty and non-stop. Do you do yoga to prepare for them?

I don’t do a lot of yoga, but I ride my bike a lot. One of the reasons I live up here in the mountains is it’s my little refuge. When I’m playing those shows it’s anywhere from 2,000 to 10,000 people that we’re performing in front of. That’s a highly stimulating experience that, on some level, I don’t think the human body is really equipped to handle. Because when you’re on tour, within five hours of feeling the most euphoric you could ever possibly feel, you’re rattling around in a tour bus on highway 80, and it fucking sucks.

So do you do your Environmental Action Days because of your progressive leanings, or because you’re sick of being stuck in a van?

Both of those, for sure. I went to school at the University of Colorado, and I really went there for the mountains. I feel like the mountains and the natural environment taught me more than school, in some ways. So I have a respect and reverence for this planet, and for myself, and I want to do my part—albeit a very small one—to get people’s hands in the earth. I want to remind them where their food comes from in a very direct way, and remind people that perhaps their antidepressant is not in a pill but it’s right in their backyard, you know? And I get to go out and do a show, and connect with fans in a truly meaningful way. At the show, I go down and I hug the crowd and I tell them I love them, but it’s very superficial, you know? You’re not connecting with people in a meaningful way at a meet-and-greet, where they’re cattle-lined up to get you to sign something. That’s bullshit. But when you actually go out and work on a project with somebody, it’s a much more meaningful experience. The live show is really good at creating a celebratory feeling for everyone. And I think what’s missing from that is, “What are we celebrating for?” So this adds some nutritional value to the celebration.

I love the concept so much, in part because I think different artists could take it in so many different directions. What are some of the things you’ve worked on?

A lot of it is just looking at the land and figuring out how to create regenerative systems through human means that can allow that land to flourish even when there aren’t human beings there. So things like digging swells, planting native medicinal herbs and planting those. If there’s no irrigation at a site, being able to create systems where plants and wildlife can survive. And other times we’ll go and plant fir trees at an elementary school, or something like that. There’s a place called the Gill Tract Community Farm in the East Bay, and that piece of land is intended for low-income residents in the area. We’ve done a lot of work there.

So, you have Matisyahu on your new album, among many others, and you’ve worked pretty extensively with Mr. Lif. Who are some people you still dream about collaborating with?

I’ve often thought about collaborating with Erykah Badu, that would be really awesome. I love the Police and Sting. And James Blake is amazing. I think about a guy like that, he’s what, 23 or something? We’ve got a lifetime of music coming from him. I don’t know, though, I feel like I’m collaborating with a lot of the folks that I’ve wanted to work with.

Do you ever feel bad about pushing the actual Polish Ambassador to the fringes of Googleability?

I have to tell you, I was looking over the official bio of the Polish Ambassador to the U.S., Ryszard Schnepf, and he is in a straight b-boy pose in his picture. On the last line of his bio, it says that he plays guitar.

Oh really? [Laughter] That could be epic! He probably freakin shreds on that thing!

I noticed on your Bandcamp page that you give almost all of your music away for free. Obviously people are free to donate, but what’s your logic for keeping it free to download?

I think there are two sides of it. There’s the marketing side, where giving people free music is like giving someone your business card or something. “Here, this is me, this is what I do.” And if they like what they hear, they’ll research you and maybe figure out what you’re up to, or maybe even come see a live show. But the other side of it is that it’s just awesome to give something away. I can’t tell you how many times I’ve gotten emails from people, and hugs at shows, with people saying “Thank you, thanks for giving your music away for free.” So there’s a lot of gratitude there, and that gratitude opens a channel with that person. You get to share that moment of gratitude for each other, and for music, and for all the awesomeness that is held within a little piece of digital media.