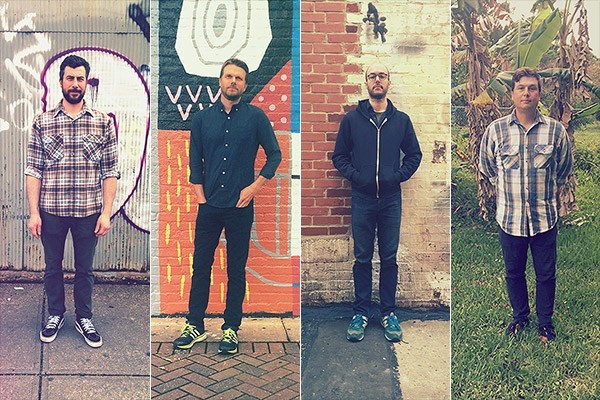 “The very first time I discovered punk rock was in skate videos. I’d be like, ‘There’s a part on here that’s awesome and I have no idea what the music is.’ Then you’d look it up. ‘OK, Dinosaur Jr. Where am I going to find that?’ And you’d search until you found it.”—Tom Reno

When he was 11 years old, Tom Reno, guitarist for the instrumental post-rock band the Mercury Program, saved up his allowance to buy his first album—Dead Kennedys’ Bedtime for Democracy. That’s not quite what you’d expect, given the group’s intricate, crystalline songs. But no one in the quartet has ever listened to music that sounds like the albums they make. In fact, when they first started playing together in the late ‘90s, the band bonded over D.C. post-hardcore and punk.

When the band, who are now scattered across the U.S., met up in to Vermont to record their recent release New Myths, they hadn’t written together in four years. Fortunately, their chemistry was as potent as ever. “I have no sense that the faucet will ever turn off,” says Reno. “If it’s still worth doing, then it should still work the way it always has. Luckily, [this time] it did.”

Reno is being pragmatic, but if the past two decades are any indication, the Mercury Program are showing no signs of burnout. We talked with Reno about the Mercury Program’s foundations and inspirations, how he used Maximumrocknroll to hunt down albums in the ‘80s, and how Fugazi changed his life.

New Myths is out on Lovitt Records, which is distributed by Dischord. How did bands from the D.C. post-hardcore scene, like Fugazi or Jawbox, shape your approach to music?

Those are the [bands] that turned my world upside-down and made me want to make music. All of those Dischord bands, all of the D.C. stuff — that’s really a common lineage for the four of us when we first started making music together. It was like, “Let’s make a part that sounds like Hoover,” or “Let’s make it so this part sounds like the Crownhate Ruin.” We talked in those terms. We were essentially just trying to emulate something that sounded like the bands that we loved. That scene in particular is probably the most critical to what I wanted to do. It shaped everything for me. The list that you said, Fugazi, Jawbox, Shudder to Think — those bands were hugely influential.

How did you discover them?

The very first time I really discovered punk rock or hardcore or post-hardcore bands was in skate videos. I started skating really young, at eight years old, so by 10 or 11 I was listening to the bands that were on the skate videos. It was like, “There’s a part on here that’s awesome and I have no idea what the music is.” Then you look it up, ‘Dinosaur Jr. Where am I going to find that?’ And you search until you find it. Minor Threat was also in the videos, and so then you discover Fugazi, and that just opens the door. I saw them in 1990, and that was when everything just flipped.

How would you find the albums?

Maximumrocknroll was one way. Once I discovered that labels would send you their catalogs, I just started getting them all. That’s how it was with Dischord and Touch and Go. So I would just get all of those. I’d either buy them, or convince the guy at the record store to let me listen to it. You just didn’t buy a lot, you waited and traded tapes.

Where did you get Maximumrocknroll?

We grew up in a town called Stuart in South Florida. Stuart had this place called Confusion Corner, where six roads all converged at this weird roundabout. At that intersection was a shop called Confusion Records. We would go in there and just stumble across things, because the guy who ran it, John, always had great stuff. For a small beach town, he knew what was going on and he was into really obscure stuff. He was really eccentric. He had a band called Autofish, and I played in that band a little bit when I first started playing music. It was a cross between Sonic Youth and Neil Young. It was great for me, because he wouldn’t teach me the songs. He’d just tell me a few notes. He’d be like, “It’s A, and then E, and then whatever,” and then we’d jam. It was my first introduction to playing in a jam-type setting. I was 17 or 18 at the time. He was probably in his mid 40s. He played guitar, and just played really weird stuff. It was all over the place.

Did you play any shows?

In 1992, I played a show on my 18th birthday with him at this giant theater where some kids had organized a show called Moonbutter. He had me wear a dress and the drummer wore a monkey mask. When you’re 18, this all feels real weird because you’ve never done it before. But at the time, also felt really normal, because you’d turn on MTV and everybody was weird. Bands were weird. You thought, ‘Alright, this is what you do.’ John always wore coach shorts, like, P.E. shorts that coaches wore. They were really tight and had pockets for whistles and weird stuff. And he’d have on a white Dinosaur Jr. Green Mind t-shirt.

You’ve designed all of the Mercury Program’s album art. What concept did you have in mind for New Myths?

I was trying to do something fairly minimalistic. At first glance, it looks like it’s just a purple box. But there’s more to it. It was trying to do something that felt right with that batch of songs. What’s on the back is what I really first saw. On the backside there are a bunch of circles, and if you look at it closely, they’re put together to make the words “New Myths.” The idea was based on old percussion records. There are a bunch of old percussion records that have circles like that.

Are you into those records, or did you just like the art?

I like really rhythmic things. When we’re jamming and the rest of the band is playing, what I tend to hear is something more rhythmic. So I try to do that with the guitar in some way. A lot of the guitar parts are basically repeated patterns. In hindsight, I would have liked to start playing drums instead of guitar when I was 18. But I have the instrument I have. [laughs]