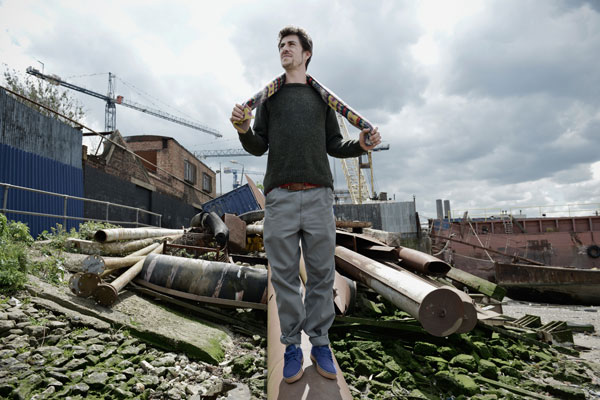 “Stay up almost all night, then get up and try and have the least amount of time before I get back into it. I shouldn’t be saying this, but I won’t even shower—anything. I’ll stay in for a week at a time sometimes and feel like I’m going mental. But I love it.”

“At University I didn’t learn shit—I learned that I really wanted to do music. I met this one dude named Lawrence; he was the only other guy from London. We were really really good mates, but he pissed me off. He never came over to my house, he never went out, he never did nothin’. He was a real good friend, but I was just like dude, you’ve never even been to my house! And then, at the end of like three years, he played me all the music he’d been working on, and I realized: Wow. This is what happens when you really put your head down.”

Sitting in his bare-walled bedroom in the U.K., unshaven and surrounded by gear, producer Paul White is trying to explain himself. Not an easy thing for anyone to do, but he’s doing a pretty good job of it.

“I came back from Uni and then, that was it: went into a basement in my parents’ house, started buying records, stole all their records as well, and just worked. I was also working part-time at a music college, and I’d be foaming at the mouth by the end of the day because all I’d do is watch people make music; I’d literally go to work and be pulling my hair out – literally. I’d be like, what am I doing at work? I should be at home.”

Eight years later, White doesn’t live at his parents’ anymore, but little else has changed in terms of his lifestyle.

“Stay up almost all night, then get up and try and have the least amount of time before I get back into it. I shouldn’t be saying this but I won’t even shower—anything. I’ll stay in for a week at a time sometimes and feel like I’m going mental. But I love it.”

As for relationships, and time off? “It’s bad. I’m trying to get better, but I find it hard because I love the music so much, you know?” He sighs, and then chuckles, “There’ll always be another woman.”

Watch The Ants is White’s first full release since 2011, and his most energetic, eye-opening collection of music yet. Writing new material is White’s number one occupation, and practically the only thing he’s done since graduating almost a decade ago. Two years spent at the BRIT School equipped him with music recording know-how and practical skills; and his four years at the University of Bristol drove him away from doing anything else. As a result, White is unbelievably prolific, but remote.

White is quite like a queen ant, safe in the comfort of his home environment, but always producing. There’s a feedback loop moving in and out of his London flat; long, unbroken lines of records. Records come in, new records go out, and it keeps him humming. He doesn’t compose on a computer, sticking to the fundamentals of his analogue education. He keeps no drum library, slicing up a new record for every song. He keeps keyboards, synths, and MPCs stacked up around him. He calls it his toy shed, but then again he lives in it.

Watch The Ants is incredibly hard to pin down, because each track marches on with its own textural singularity. There’s shuffling hip hop with no back beat, ambient psychedelia, and animated, left field vocal samples. Engineering a fresh palette of sounds with every go, White feels no obligation to do things a certain way. His lead instruments, if you can call them that, flit somewhere between melody and explorative solo, often sounding more like deep meditative noodling than a lead line. To fill out the foreground, he recruits the MCs.

The experimentally minded MCs who rap over White’s beats seem to have adopted him rather than the other way around. Highbrow law school dropout Homeboy Sandman and rappers from the rawest blocks of Detroit alike have been drawn to his challenging compositions. After lending three tracks to Danny Brown’s XXX in 2011, White’s profile increased considerably, but he continued on just as before, churning out music to his own tune, whether or not it was rap-able. Brown recruited him again for his forthcoming Old album, which promises to be a breakthrough for White and some of Brown’s most mature work, too. White welcomes the attention, but in the context of all his work, it’s just another meticulous step forward.

White’s moods and emotions are channeled almost entirely into his instrumentals, and his rap collaborations have much more to do with mutual interpretation than a personal rapport. “What trips me out sometimes is that they’ll rap about something to do with how I felt when I was writing the beat – that blows my head off. It’s like, how did you know? We must be on the same page, we must come from the same tree.” That’s White’s ideal form of communication. In contrast, he recounts how he sat backstage with Danny Brown last year, one of the few times they’ve met face-to-face, trying to talk over the din as Brown ceremoniously poured champagne on a kneeling fan. White didn’t feel quite as productive in that environment.

White’s relationship to his music is uncomplicated and unfalteringly devotional. He tapes up clips and pictures on his walls for inspiration, and sets alarms on his phone that periodically rouse him with inspirational quotes. Buzz: “What I’m talking about is discipline—striving for things that will never be” – Sun Ra.

Since signing on with One-Handed Music in 2008, White has sent label head Alex Chase a CD every month without a break. Do the math: that means Chase has more than a thousand unreleased Paul White tracks, which he carefully combed through to make up White’s representative discography.

Speaking with him, you’d never know all that he’s accomplished, and he wants it that way. “I don’t think I could ever think of myself as the shit – I don’t think anybody should. That’s the minute you stop. They say perfection is a lot like death you know.” This head-down work ethic is the only way he knows; White ploughs the soil, keeps the crops in rotation, and hopefully drinks enough water to stay alive. And no matter what kind of harvest he yields at the end of each month, he starts over again, in a new field. “Forget the past, you know? Every day you’ve got to wake up and forget the day before.”

“It’s a shame, people have this disbelief—sure, some people are born with different talents in different areas—but people have this disbelief that you’ve got to be born some genius to make it. And it stops people from working hard at something. I know people probably disagree but, I think life can be as simple as that: if you want something enough, and you love it enough, and you work for it enough, you know, you can get it.”