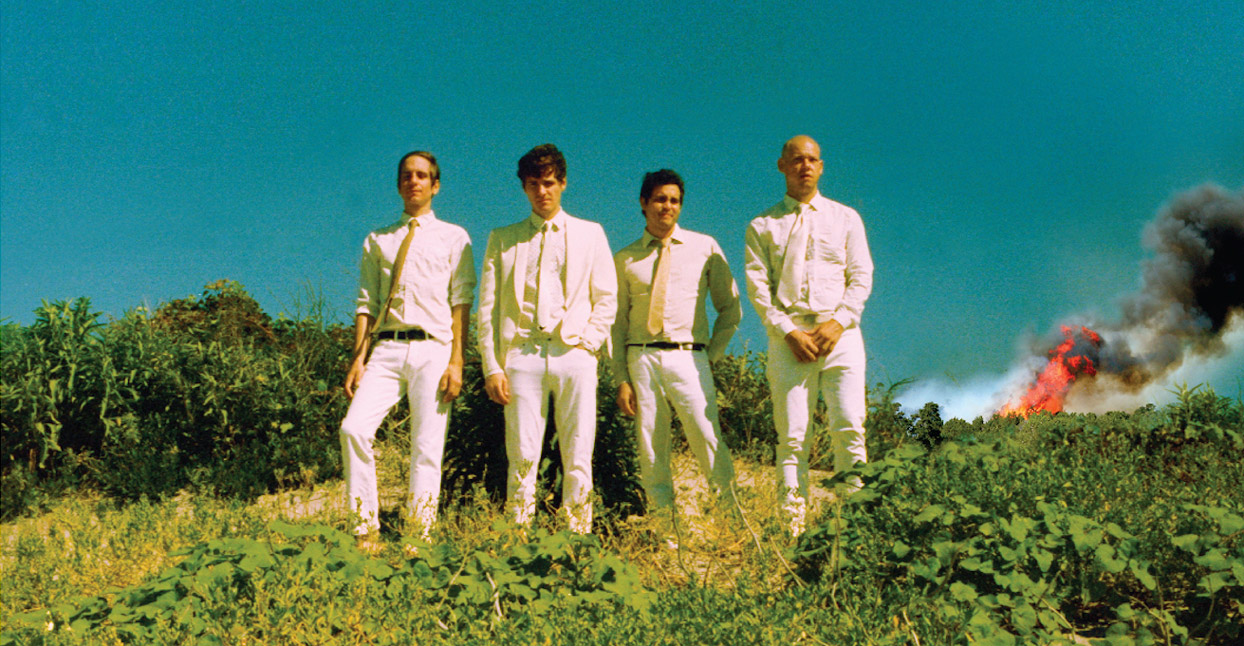 The Dig, a multi-hyphenate quartet out of NYC, is a band of brothers committed to making music on their own terms. With three songwriters, the project is a true collaboration Comprised of childhood friends Emile Mosseri, David Baldwin, and Erick Eiser, along with Mark Demiglio, who all bring their own distinct influences to the mix, the band hops genres like a DJ with a twitchy finger: dream pop, garage, post-punk, and a hint of psych-folk. With a list of influences ranging from Harry Nilsson to Betty Harris, they’ve absorbed enough of pop music history to make the leaps feel convincing.

The Dig’s latest, Bloodshot Tokyo, has a Travolta strut with a Lou Reed sense of danger. Trading the bedroom mellow of their previous work for shimmering synths and propulsive percussion, Tokyo is decidedly built for the dance floor. Now in his 30s and still saddled, as so many musicians are, with a day job, guitarist/vocalist Baldwin still has only the music on his mind. With Tokyo, the band has created their most accessible and engaging record to date.

Did you collectively decide to try to steer clear of easy compartmentalization?

I think it comes from us always listening and learning new music. We always want to do something a little different with every album. Every record is a natural progression, not something predetermined. We spent about two years writing this record. We all write songs together, so everyone’s individual tastes gets combined. Over the course of two years, a lot of different stuff ends up in there. We got a lot more into sampling on this record. We always listen to a lot of older music, and obviously Dylan and the Beatles are the common denominator. We always have that as a basic template that we can all relate. Then we add our own stuff on top of that.

There’s a healthy dance vibe on this record. Was that a response to trying to court the “Coachella generation?”

We haven’t really done a lot of upbeat, dance stuff in the past, and that was one thing we thought about when we were approaching this record. We thought it would be fun, especially for live shows, to have it be more upbeat. Emile [Mosseri guitar/vox] and I started playing together when we were 10. We started as a Rage Against the Machine cover band. When you’re young, you cycle through musical phases pretty quickly, but Rage was our first big love. We’ve made a lot of music that can be categorized as mellow. We just wanted to mix it up and do something different, more for the benefit of our own mental health. We wanted something more immediate, rather than us consciously trying to appeal to any specific audience.

You got your name from the Brian Jonestown Massacre documentary Dig! Are you attracted to that elegantly wasted, self destructive artistic mentality?

When I was young, it was hard not to see that kind of lifestyle through a romanticized lens and be a little attracted to it. Now, we have the opposite vibe of that in the band. Now we’re just trying to keep our shit together to be able to play shows. Our live shows are getting more involved, because we’re using a lot more samples and different sounds, so we have to be really on top of it to pull it off. We feel like we have to put the show first. That’s definitely not the most rock n’ roll response, but it’s the way we have to do it.

It’s not really sexy to be nodding off or fall-down drunk on stage anymore.

We’ve always been envious of people who can party like that and still pull it off. You look at someone like Harry Nilsson, doing a bunch of drugs, smoking cigarettes and getting wasted every night. Until he lost it, he was one of the best performers ever. Unfortunately, we’re not that kind of band.

With three songwriters in the band, doesn’t ego or alpha male syndrome rear its head?

It definitely does. Ego definitely comes into play for sure. We got over this hump where there was a lot of fighting over the years, and now it diminishes with each year. We reached a peak four or five years ago, when our fighting was the worst. Now, we’re more on the same page the majority of the time. There came a point where everyone had already said the most fucked-up shit they could possibly say to each other. There was nowhere else to go with insults. We gradually got more mature about any friction that came up. We all do write equally, and there’s definitely songs that are way more driven by one person, but in the end it’s all very collaborative.

Did it ever come down to drag-out, Brian Jonestown-style physical fights?

[Laughs]. We’re all skinny guys, so it wouldn’t be a very manly-looking fight. It’s those verbal fights that hurt the most. It might have been better for us if we had been able to get some physical aggression out. We should have done those Metallica therapy sessions. It worked out for them.

Was the process behind Bloodshot Tokyo business as usual, or did you step outside your comfort zones to court creativity?

We were definitely outside our comfort zones on this one. It felt different then all our previous releases. In the past, we had to be our own managers and booking agents on top of the music. We were booking our own tours, which was basically three months of planning. We took all that time and effort that we would normally spend booking tours and put it into writing music. We basically put a halt on anything that didn’t have to do with the music. During that two years, and maybe it didn’t have to be that long, but all we did was write. We were only worried about the music, which was a major change for us creatively.

You’ve opened for the Walkmen, the Lumineers, and the Joy Formidable. Are you frustrated that you haven’t encountered massive crossover success?

I can’t spend too much time thinking about the place the band is at. For us, the most important thing is that we consider ourselves students of songwriting, and we’re constantly working on that. We’re just trying to write the best songs we possibly can, and from there you can just hope for the most opportunities for people to hear the songs. We see this whole thing as a continuous upward trajectory. We feel like we’re headed to a place, so we don’t get too frustrated if certain things don’t happen in a certain timeframe. There’s definitely moments when I consider how much music is out there, and how much less people are making financially. Print magazines keep shrinking in size or disappearing completely, so I guess that’s a metaphor for the industry. TV and movies have kind of replaced radio as a means for bands to gain exposure, and there’s a lot more different opportunities for people to hear your stuff.

For that kind of Lumineers success, do bands have to pigeonhole themselves into one easily digestible package?

I think for something to have that really rabid, massive impact, I think it has to be something that is very easy to latch on to. Digestible is a good way to put it. For that level of success, it seems like you need a radio-friendly, hit song. Ok, fine. Give me two hours to do that.