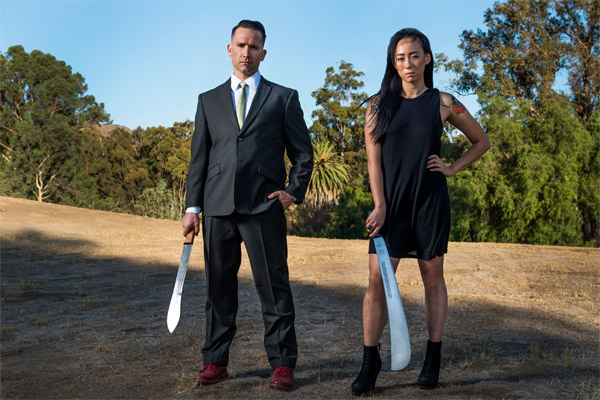 “If this is indeed the last year of what the current Xiu Xiu is, we are going to play our asses off… I am more proud of Angel Guts: Red Classroom than anything else we have ever done.”

Xiu Xiu frontman Jamie Stewart recently moved to Los Angeles’ Macarthur Park, a neighborhood he vividly describes as a “decaying and somehow beautiful rainbow of hard drugs, mangos, and a lake from which dead bodies are pulled. There is incredible tension. There are one-eyed homeless people, migrant workers, Santa Muerte temples, trans-sex workers, insanely crowded 99 cent stores, swap meets that you feel like you could vanish in, human feces on the sidewalk, and Central American gangsters.” It’s this environment, where sex and death are everywhere, that inspired the band’s ninth album, Angel Guts: Red Classroom.

The influence of these eclectic surroundings is clear on a song like “Black Dick,” which juxtaposes hardcore pornography with imagery from Latin Catholicism. The song is beautiful, ugly, sinister and innocent all at the same time, because Stewart lets it go where it wants to, with little regard for self-censorship. “I was drunk out of my mind at an all night dance club in Nuremberg and all the words came from heaven at once,” he confesses. “I crawled behind the DJ booth where my backpack and little notebook were, and I scrawled the lyrics. A couple of months later I found them – barely legible but all there. At some point that night I also fell asleep, on the floor of the club, and took off all my clothes,” he adds. Angel Guts: Red Classroom has already drawn comparisons to Suicide, Kraftwerk, Nico and Einstürzende Neubauten. Latter day Scott Walker is perhaps a less obvious influence, but the haunting sonic textures, and the terror of Stewart’s vocal performance in songs like “Archie Fades,” are refreshingly reminiscent of Walker’s later albums like 1995’s Tilt and 2012’s Bish Bosch. In the 2006 documentary Scott Walker: 30 Century Man, there’s an unforgettable scene where Walker is recording the sound of his bare fist punching a raw slab of beef. “I actually watched that film at [producer] John Congleton’s house in 2009, while we were recording the Blue Water White Death record,” Stewart admits. “Scott Walker in that scene is remarkable.”

While Stewart didn’t punch any dead animals when working on Angel Guts: Red Classroom, he and Congleton did take some creative approaches to creating the sonic topography. At the beginning of “Lawrence Liqours” there is a recording of chains being pulled up the elevator shaft to Stewart’s apartment. The sound of street hawkers and scooter horns find their way into “Bitter Melon,” and in “Adult Friends” there is a recording of pigs from a farm in the middle of New Mexico. While enthusiastic to incorporate the sounds and influence of his surroundings into his music, Stewart gets most giddy when talking about the analog synthesizers he used on the record. When asked about his quiver of synths, he gushed, “Now you’re talking, my fellow nerd! We used the Oberheim SEM Pro, a Vermona Mono Lancet, a Moog Sub Phatty, an Elka Rhapsody, a Prophet 08, Flower Electronics’ Little Boy Black, a Jealous Heart [also made by Flower], a Sleepdrone 6 oscillator, a Korg Monotron, some weirdo custom synth I had made, a Health Club synthesizer, a Stylophone, a pink Casio PT 1, The Synare [analog drum synthesizer], Dr. Rhythm DR-55, a Korg Rhythm 33 and the Roland CR-8000. And although it’s not analog, we used my dear old friend the microKORG for its fake vocal formant sound. I could talk about this rabbit hole of life all day.”

Despite brimming with enthusiasm for the process behind the album, and the resulting sound of Angel Guts: Red Classroom, Stewart states that the record signals the death of Xiu Xiu as we know it. “After this year, the Xiu Xiu which writes songs might be going on hiatus for a while, or disappearing forever. A Xiu Xiu that does noise and minimalism records will likely emerge.” And then, out of nowhere, he adds, “I have orientation this week at mortician school.”

The yin and yang of death and sex that guided Stewart through this latest Xiu Xiu album is now out of balance, and death has apparently conquered all. But while the future of Xiu Xiu is uncertain, Stewart promises one thing, “If this is indeed the last year of what the current Xiu Xiu is, we are going to play our asses off on our 2014 tours. I am more proud of Angel Guts: Red Classroom than anything else we have ever done.”