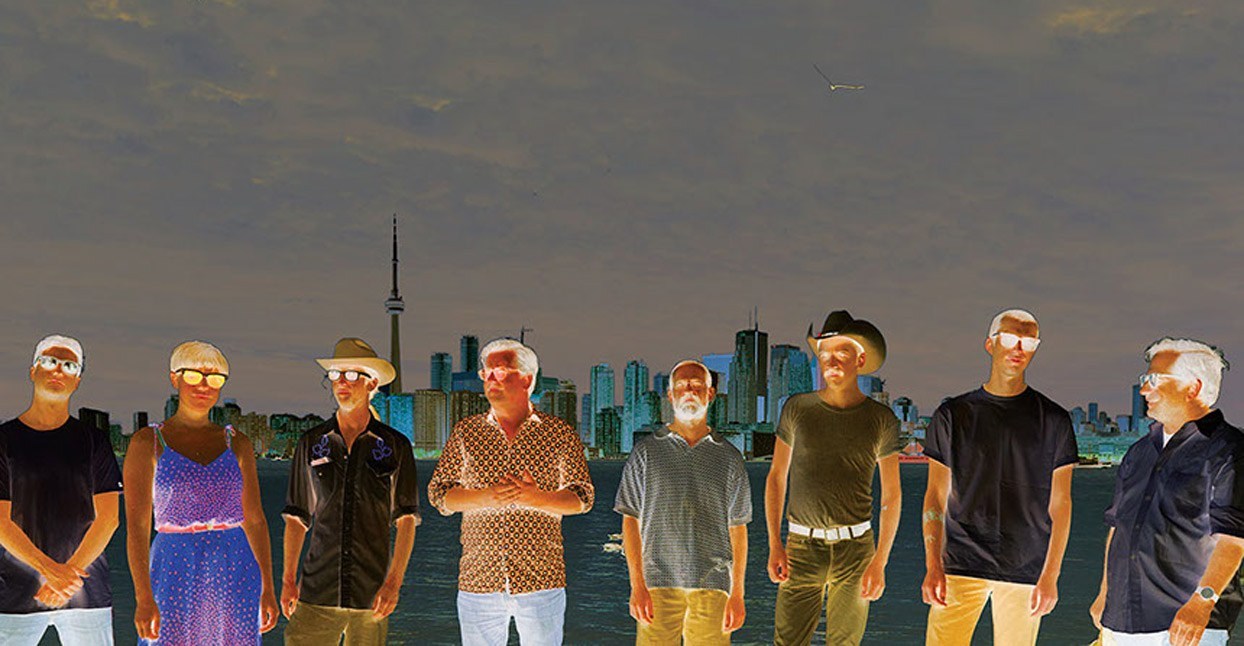 Last year, Matthew “Doc” Dunn released two complementary solo albums, Lightbourn and Some Horses Run, a mere five months apart, through his own Cosmic Range Records. The records are effectively identical twins—from their quaint sun-dappled cover photos, to their equally bewitching blends of wah-wah-slathered, late-’60s psychedelic soul and early-’70s country-rock groove. But flip over to the similarly scaled backcover portraits and you’ll be presented with a study in stark contrasts. On Lightbourn’s flipside, Dunn appears sporting a tan cowboy hat, short brown hair, and a tidy five o’clock shadow; on Some Horses Run, Dunn’s wearing the same cowboy hat, however, his hair has grown past his shoulders, and his beard isn’t too far behind.

But more than just the passage of time, the two portraits highlight an essential dichotomy. Because when you talk about Matthew “Doc” Dunn, you have to specify which one you’re talking about: the chill singer/songwriter heard on the aforementioned albums, or the mad scientist who’s been summoning freeform sonic storms across the underground for the better part of 20 years. And within that contradiction lies another: between a generous artist whose music radiates a deep sense of spirituality no matter what form it takes, and a stone-cold pragmatist whose notions of autonomy and worthiness can chafe against egalitarian DIY principles.

Though raised in Toronto, Dunn spent much of the 2000s traversing the New Weird America, joining psych-folk duo MV & EE as a touring guitarist and collaborating with freak-scene stalwarts like Woods, Sunburned Hand of the Man, and Kevin Morby. Meanwhile, back home, he had become a key figure in Toronto’s noise scene through a steady stream of drone-based solo CD-R releases and his short-lived 20-person “hillbilly raga” collective, the Transcendental Rodeo. Given his avant-improv pedigree, Dunn’s current tilt toward warmly nostalgic, classic rock-inspired reveries may strike some old heads as decidedly off-brand. But bridging the gap between those two worlds is The Cosmic Range, the hallucinogenic space-jazz troupe Dunn formed in 2014 with a cast of local indie all-stars including guitarist Max Turnbull (aka Slim Twig), drummer Kieran Adams (of DIANA), Mike Smith (who plays with Jennifer Castle and Sandro Perri), percussionist Brandon Valdivia (of Lido Pimienta’s band), keyboardist Jonathan Adjemian, vocalist Isla Craig, and veteran saxophonist Andy Haas (whose credits include everyone from ‘80s new wave hitmakers Martha and the Muffins to John Zorn).

“I got really tired of working alone,” Dunn says during a pre-show chat at the cozy Casbah in Hamilton, Ontario, where he’s opening for Jennifer Castle. “With a lot of the underground CD-R stuff I was doing, I got into a bad place—I started to feel like it was all for nothing. And the shows felt like failed science experiments. So I needed to do something with other people. I used to always to joke that when the world’s coming to end, I’ll start playing boogie—music for the crowd. In the avant-garde world, everyone got so contemptuous of the audience—and it’s become outwardly contemptuous to the point where you’d end up with no audience. I didn’t see anyone having any fun. I love making people dance.”

Of course, Dunn’s idea of dance music probably wouldn’t fly in your typical club. Much like the band’s self-titled 2016 debut, The Cosmic Range’s upcoming second album, The Gratitude Principle, is caught in a love triangle between Miles Davis’s electric psych-jazz splatter, Fela Kuti’s stuttering funk, and the most outre kosmische rock. But Dunn’s chief inspiration for the band leans to the far right of the dial.

“I’ve always had this dream of putting a studio band together, like a Wrecking Crew kind of thing,” he says, referring to the famed L.A. session team behind countless ’60s pop hits. “Everyone in this band has such a crazy skill set, and it was like, ‘We can do the stuff that I’m writing [for The Cosmic Range], but then we can also be a working band for people.”

Dunn had a golden opportunity to put that theory to the test last year when The Cosmic Range served as Meg Remy’s support crew on U.S. Girls’ agit-disco tour de force for In a Poem Unlimited. But Dunn’s use of the term “working band” is no idle euphemism. For him, music is labor—and, thus, he believes in being paid appropriately for it. As Dunn tells it, his transition from the improvised soundscaping of his CD-R days to his current predilection for large, crowd-engaging rock ensembles is as much ideological as musical—a rebuke against the idea that DIY need be synonymous with amateurism and thrift.

“Talking about money at all is seen as this capitalist, monstrous thing,” Dunn says, “but you can’t just lose money doing all this stuff! I’m really obsessed with ownership. Prince, Dylan—they were always about ownership, and I’ve watched our entire generation just give it all away online, and that’s pretty crazy to me. Because that means you’ve devalued your stuff instantly, like there’s no worth to it. People have to remember: in the era of The Rolling Stones and Yardbirds, there were only, like, 20 white rhythm & blues bands in the world, and they were really great. And, like, right now, Jennifer Castle and Meg Remy—they’re the best. They’re demonstrably better than their peers. I’m just praying for the day when there are just less people doing this, and get back to the way it used to be.”

Unsurprisingly, Dunn is no fan of social media—he doesn’t have a Twitter account or Facebook page to promote his music, and when he tells me he’s thinking about maybe getting on Instagram, it doesn’t exactly sound like a top priority. But all that’s not because he’s an avowed Luddite. Rather, what many see as a free promotional outlet, he sees a time-suck that thrives on a disconnect between effort and reward.

“I’ve seen no good come of it, I think it’s deactivated our generation pretty much on all fronts,” he says. “I remember 10 years ago, when I was playing Primavera Sound [with MV & EE], I had breakfast with Kool Keith one morning. He was sitting there on his computer, and he said, ‘Hey you, come here,’ and he was like, ‘Does your management make you do MySpace?’ And he and I are started talking about how there was no correlation between money and the time it takes to do it. So when Facebook showed up, I remember thinking: If you people are spending so much time doing this, where’s the money? Not to sound like a money-driven maniac, but if you’re going to spend this much time doing something, there was has to be some flip. I just couldn’t get into it. I like to spend my time being creative and productive.”