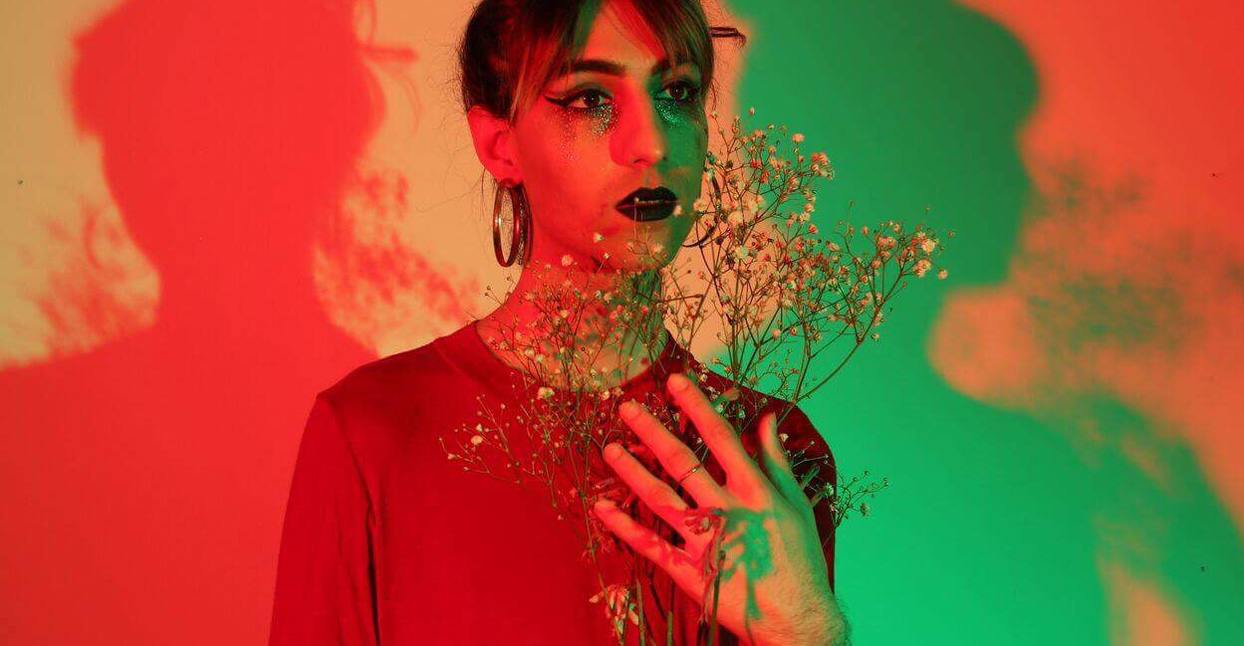 Los Angeles artist Sepehr Mashiahof, who records and performs as The Bedroom Witch, uses catchy, danceable electronic music as a vehicle to explore—and to heal from—personal trauma. Her presence, both on and off-stage, is both soothing and quietly confident—she almost seems to glide instead of walk. Her performances, often accompanied by background projections she makes herself, are designed to inspire her audience to move. “I want all the struggling, beautiful freaks with whom I exist to find comfort in whatever way resonates with them individually through this other world that I designed for myself a long time ago.” she says, “This album is for them—it’s for us. and for our collective healing. Not for anyone else.”

As Mashiahof sees it, the sense of alone-ness that often comes with being socially marginalized can be both physical and metaphysical—which is why that dancefloor can be such a regenerative space. All of that feeds into the music she makes as Bedroom Witch. “My feelings of isolation from society definitely inform why I chose to set the Bedroom Witch [project] in a detached bedroom, floating somewhere in space and time,” she says.

The first full-length by The Bedroom Witch is set to come out on L.A.-based Practical Records, who have previously released work from Jeepneys, Julius Smack and Wizard Apprentice. The album, bluntly titled Injury, is due for tape release on April 21st. The album is a testament to Mashiahof’s fragility, vulnerability, and resilience in a world that sometimes refuses to make space for her. “My intention with this album,” she says, “was to source my own traumas and to confront them lucidly, in an attempt to make peace with the fact that they’ll never really go away.” The album feels simultaneously present, prophetically futuristic, and indebted to ‘80s dystopian cinema. Mashiahof’s dark electronics foreground her personal lyrics, where she calls upon those on the margins to imagine a future where they play a leading role. “When I think of Injury,” she says, “all I see is a vast land of volcanoes, statues, white balloons and shattered hourglasses scattered along seashores looking out into nothingness. That’s where I’ve been, and now I’m looking for the ones who dropped me off here and erased my memory.”

We talked to Mashiahof at length to explore this vision further.

What was the recording process like for this album? Was it mostly done in isolation or was it more of a social thing?

Injury, like my previous albums, was manifested in the isolation and comfort of my bedroom.  Having my synths and recording equipment so accessible and immediate has been my process since I started this project six years ago.  Recording melodies that randomly pop into my brain has always been a form of tension relief for me. I’m so scatterbrained, and sometimes I feel like I’m losing control of my thoughts. When I redirect that hyper energy into recording melodies, I am able to collect myself and find a moment of peace. I did get my friends Hana Weiss [of Softdrink], Jenna Marx [of Joyride! and SOAR], and Ducky Bace to recite a chant with me on the track “Unfamiliar,” in my bedroom when we were all together one night. That felt like I got a song to socialize, for once.

When I didn’t have access to a drum machine for a couple of months, my sister Sepand [of SBSM] made me some beats for the album, but that was less collaborative and more of a ‘Here you go, don’t be sad’ [thing].

This album seems to deal with trauma, attempted healing, and contemplation. Is there an overarching theme that you were meditating on during the songwriting process? What kind of ideas does the title of the album, Injury, speak to?

The name of the album came from how I’ve distinguished the term ‘injury’ from other descriptions of physical pain. When I hear someone say ‘I hurt my arm’ or whatever, I see that pain as temporary.  When you replace ‘hurt’ with ‘injured,’ I read that as a long lasting, insidious form of pain—a pain that can maybe ease over time, but that still lingers and can be triggered at any time in your present. This led to me drawing parallels with how I distinguish trauma from other descriptions of being negatively impacted by life experiences.

I experienced a night last year where a traumatic event of sexual assault resurfaced in my memories while I was literally just hanging out in my bedroom, and I had a meltdown over it.  I understood this meltdown as a result of me suppressing that memory long enough to where it found its way out in a really terrifying way. The long overdue processing and confrontation of that traumatic experience made me obsess over sourcing all my other traumas—or, at least, as many as I could—in my life and be friends with the demons they turned into.

These songs feel like they’re equal parts looking inward and observing human nature in others. Do you feel like you often find yourself contemplating human behavior in your art?

Always. The weight of empathy makes it impossible for me to not see people. I’m really confused by people and I feel as if they disappoint me in a lot of ways. On top of that, I feel too much for people. I had to isolate with my art as a way to deal with how loud other people’s feelings are in my head.

In that fictional space of isolation, I’m giving myself breathing room to observe and to try and solve the riddles of why people are the way that they are.  Some of my songs on this album are telling stories that speak to that – ‘Irremediable’ tells the story of the Bedroom Witch somehow waking up in the ‘ghost realm.’ [She] comes back to Earth as a ghost who is trying to spread messages to humans about taking care of each other. There’s a disconnect between ghosts and humans trying to communicate with one another, though, and the humans can only understand these messages through body movement.

That disconnect in language was meant to be a reference to my experience as an Iranian immigrant in America. Growing up, I watched my mother pantomime her thoughts to English speakers out of fear that her feelings and ideas would be misunderstood. I understood my relationship to language as a split tongue that’s always complicated my interactions and experiences with other people. That’s probably where my aversion to being misunderstood is rooted from.

What kind of gear did you use for this album?

The same as always. [There’s] my two go-to synths: a Roland Juno 2—thanks, sister dearest—and a Microkorg and a couple of half-haunted toy keyboards. I’m borrowing a drum machine right now—the pink Electribe. I record whatever sounds I can manipulate with these keyboards and the drum machine straight through a USB onto my computer

How would you say this release builds upon your already existing body of recorded work?

I’ve been focusing more on the way this album deviates a little from the intention of my other bodies of work in the past. The themes of Bedroom Witch songs have always been expressed through storytelling and fictional narratives, but I feel as if Injury built off of these previous stories in a more personal, emotional way.  This album is confronting my realities more directly as opposed to how my previous albums confronted them with a “parallel universe to my own” kind of approach.

Ultimately, the Bedroom Witch is an extension of me; she’s not meant to be a character separate from myself or that I have to channel. She’s just that—me. I’ve just had a tendency to turn my life experiences into fictional/supernatural stories through her. Injury reads like a bunch of diary entries expressing my constant state of emotional distress without using too much storytelling or poetic writing. This album is more grounded in that way.

How do your family and ancestral bonds inform your work? What kind of sounds, lyrics and feelings do they evoke?

My sister and I grew up listening to my parents constantly playing and composing with each other using very old, traditional Iranian instruments. I remember looking at my mother’s tar [a six stringed instrument with an ‘eight’-shaped head—ed.] as this magical relic that created sound and was not to be touched by anyone but her. The tar is known to literally relax muscles in the body of the listener and to help ease depression. That’s probably why my mother picked it up as a child. She lost her mother at age seven to a freak accident, and I feel like that [particular] trauma and grief in her life has been this deep undercurrent of sadness for everyone in my family.  I think my family’s way of dealing with our individual and collective ‘injuries’ in general has always been to create.
We all feel so much, and I see how much magic and energy that can conjure, but also how much the overabundance of empathy harms us at the same time. The only way to deal with that really is to be creative.

I’m in a place right now where I can’t stop thinking about being from ‘nowhere’ as an Iranian immigrant in America. I also know that I have ancestors, so I have to have come from somewhere. How could I be from somewhere and have a lineage if I’ve never felt like home existed for me on Earth in the first place?  I have a really complicated relationship with these thoughts, and I think it’s been showing it’s face a lot lately in the words that are coming out in my songs.

I think Injury built a bridge for me to find the comfort and ability to finally source the foundational layers of my trauma, rooted in how much being an immigrant here has fucked me up throughout my life.

On the Practical Records website it says that “the lyrics [of Injury] invoke visions of safe spaces for the trans/queer body to cope with a current reality of violence”. Can you elaborate on that idea?

I feel as if Injury has served as a direct invitation for trans, queer, marginalized, and all other folks who are invisible in a white supremacist, phobic America to enter and make beds in this fictional world I’ve created for myself.

I had a tendency in the past to intentionally isolate people from these stories I was telling through the Bedroom Witch by using such a nonlinear approach to storytelling and ‘nonsensical’ dialogue as the foundation. I’ve always been so afraid of people invalidating how my thoughts and feelings translated in creative outlets that I had this ‘Fuck you, you’re not welcome here’ mentality towards anyone that tried to dig too deep into the fiction I’ve created based on my reality.

Existence itself is trauma. These fantasies are the only place I find comfort and have control over.  When I snap back into reality after long periods of escaping, it becomes more and more obvious to me that there is nothing here for me in this world. I have nothing besides the close human bonds I’ve maintained through my family, [and] friends that have helped me carefully curate a support system through. After reminding myself that so many loved ones in my life feel a similar way, I’ve eased up on my trust issues over time, and I think the way language is used in this album really speaks to that.