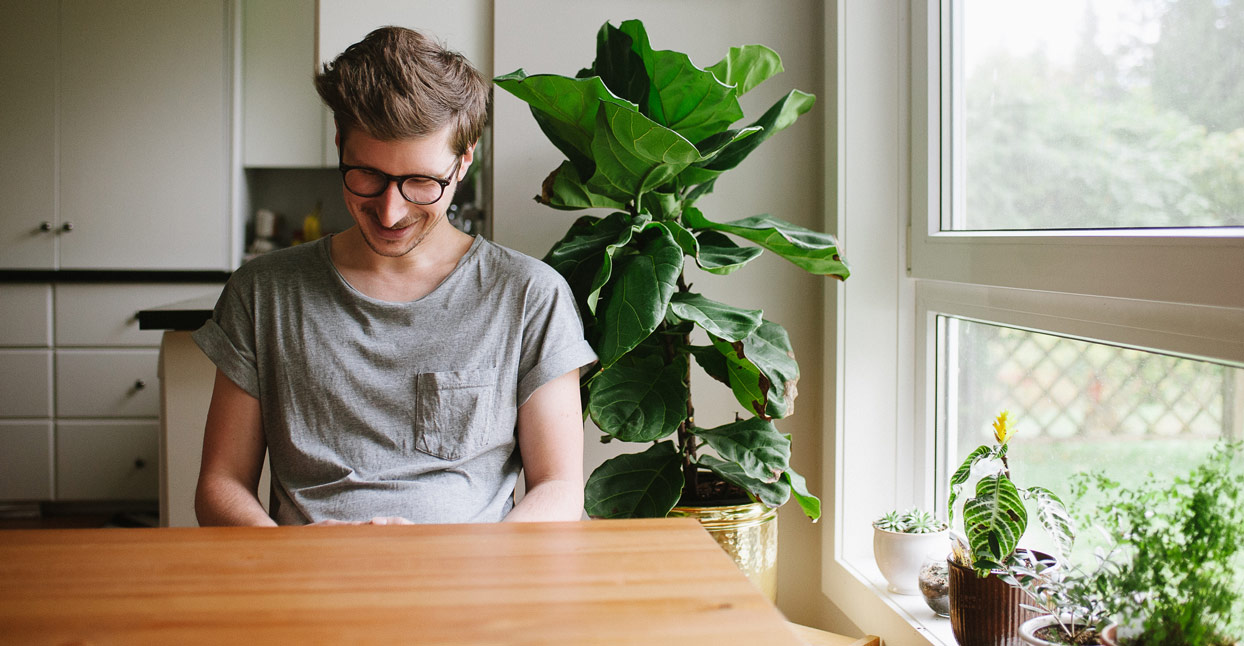 The title Themes for Dying Earth doesn’t exactly radiate sunshine, but for Vancouver electronic producer Jamison, who records as Teen Daze, it represents a new beginning for both himself and his music. The composer arrived in the rose-colored world of 2010s synth-pop, but after suffering a mental collapse while touring to support Morning World, he decided to abandon the more utopian aspects of his early music for something a bit heavier.

In fact, when Teen Daze revisited a song he wrote in 2009, he was struck by how removed from it he felt. “I’ve made my share of summery pop music,” the producer tells us. “When I think about it now, I hear a privilege. What a crazy time we were living in, that you could make a record like that and it would be totally accepted?”

These days, Teen Daze is tuned into the environment, and dedicated to preserving it for future generations. Despite the doom it implies, Themes for Dying Earth is a mostly positive collection of ambient pop. We talked with him about preservation, terraforming planets, and the blending of the natural world into electronic music.

The title suggests apocalypse, but the album feels very alive and ver soothing. Can you talk about that juxtaposition?

I was fascinated with the idea of terraforming, and what our future would look like if we had other options in terms of where we existed in the universe. There was a sci-fi channel show that ran for 10 episodes called The Expanse. I was so into it. It presents a near future where Mars has been terraformed into a high society. Earth still exists, but it’s been affected by climate change, and there’s this other, more working-class section of the universe where people live. Thinking about this concept of our future, where we’re not restricted to living on this planet, what would it look like to say goodbye to the planet, but knowing we have somewhere else to go to?

So this your Music for Climate Deniers?

In my mind, why would you not want to support the continuation of life here? It’s frustrating that it’s become a political issue. If you’re a conservative or Republican then global warming is false democratic nonsense. Even if it is a political issue, why would you not want to help sustain life on this planet? Because at the moment, we don’t have anywhere else to go. Imagine looking around and seeing the earth with this idea that, ‘I’m not going to see this stuff again.’ It’s an optimistic and yet immensely sad situation. Even lyrically, the songs are wrapped up in this idea of things changing and ending, and in that ending something beautiful still exists.

What’s one song that addresses this?

When did nature become influential in your life?

In 2011, I did the Silent Planet EP, and I also made a side project called Two Bicycles. Those were the first two [projects] where I was trying to intentionally capture a natural feeling in the music, or where I was obviously reflecting questions about nature. I moved to my parents house to crash there for a couple months. They were living at the base of a mountain range. I’d done so much recording in a room with barely a window, and now I was recording on the top floor of my parent’s place with a crazy view of a mountain. It made me realize there’s a lot of inspiration to be found there.

Was there any hesitancy about being somewhat political in your music?

I’ve been guilty of resting on my laurels. I can open Ableton and make an entire record completely within the box, but people are going to be able to tell the difference between something made in that way, and something made with heart and emotion.

Can humanity turn a corner and start to  care about preserving the earth, or is terraforming other planets our only option?

On bad days, I’m completely defeated by the thought of, ‘How do you go up against a government or entire system that is saying the earth is here for us to make money off of?’ It’s important to stay positive in the face of that, but also take stock of the world that we’re living in. This is not a permanent culture that we get to involve ourselves in. It’s a spiritual thing, really. These are places that have existed and are older than our civilization. There’s something incredibly humbling about that. It puts you into space and time in a way that you realize, ‘Why are we squabbling over things that could not make a difference in the grand scheme of things? Why would we not want to protect things that are ancient and could teach us something about existence? It feels like it’s worth saving.’