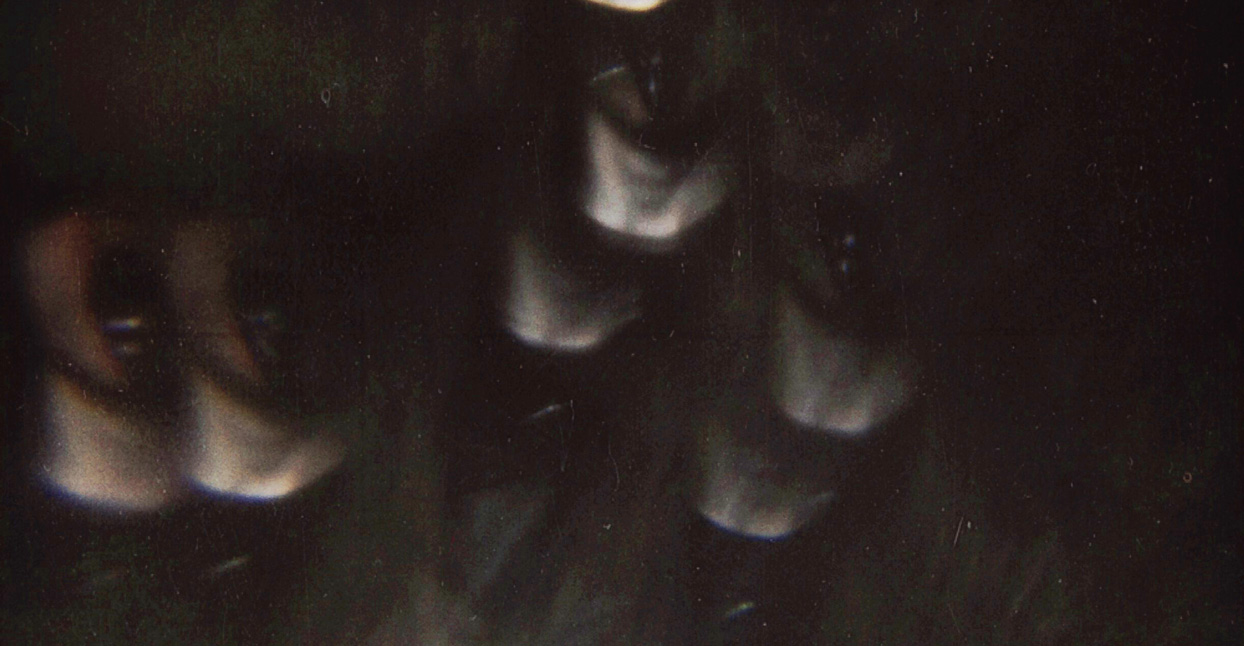 The mind of extreme metal musician Markov Soroka seems to be a self-contained multiverse. Sometimes, when an artist is involved with a myriad of different projects, it’s easy for the wires to get tangled, and soon one band starts sounding an awful lot like the other. But Soroka’s three primary ventures not only retain unique sonic identities, they have narratives all their own. From Aureole’s cosmically atmospheric black metal to the waterlogged funeral doom of Slow, there’s a whole universe of sound separating his various ventures. Somewhere between sky and sea is the distinctly earthen and timeless death metal fury of Tchornobog, which slithers through every extreme metal style without sacrificing an ounce of classic death metal ferocity. Whether operating at a hideous crawl or an explosive frenzy, the self-consuming chaos of Tchornobog’s self-titled debut is built to instill fear.

The fusion of melancholic melody with monstrous atmosphere makes for a perfect soundtrack to self-loathing and ugliness. Instead of turning this disgust inward, Soroka has created a beast of his own disgust, and made that beast the project’s namesake. When asked about the emergence of Tchornobog, it became clear that the music is a direct reflection of Soroka’s own mind. We traveled together through synesthesia and trauma and the interdependence between art and artist, which is embodied directly in the form of the Tchornobog itself.

You have multiple distinct musical personalities. How do you separate your own creative impulses into these projects? Do you write with specific projects in mind, or do things simply feel ‘right’ for one of your outlets over another?

For each entity, there is a different story. What I can say is that Tchornobog has traversed many names, and has more than one head. There are few voids that Alunar, of the Aureole project, has not traveled into. The nameless man from Slow has sunk. There are several other characters and settings that the stories harbor, but they mostly exist to represent Thalia and Melpomene, the Greek muses. I make sure that different sounds and palettes are represented in each project. This process is the most laborious part of my work as a musician, as it involves a large amount of planning. If it ever seems to the listener that parts from different entities sound similar, this is either entirely intentional—and perhaps foreshadows a convergence—or else it simply shows how flawed a writer I am. Quite frankly, these stories might have simply become exercises in synesthesia and abstract thinking against my will.

Music is very visual to me. I can see stories unfold in different spectral colors right in front of me. It starts as colors. Then, these colors gain texture—fuzzy, rocky, watery, etc.—and take in other colors, or mold into familiar structures such as flesh, cliffs, and oceans. These creations are generally in a single color and, depending on whatever memory I’ve associated with the melody or rhythms I’m hearing, I’ll usually see a single protagonist amidst all of it. This audio/visual pairing is something I have experienced  my entire life, and it is one of the most important things that I clench onto when I need an anchor to avoid stagnancy.

You create your music on your own, rather than as a member of a band. How do you compose for Tchornobog or Aureole, and do you ever feel the desire to reach out for the input of others?

My two hands tremble over a dimly lit keyboard. An e-mail on the screen reads: ‘There is too much text, perhaps shorten the list of credits?’ Anxiety strikes, but not with its usual blade. It’s as if it… destroys my computer, and then goes to eat the last piece of cheesecake that it knew I was saving for breakfast. This particular anxiety is cruel, because it engages an inner conflict, where it feels like I’m lying to myself if I don’t take the time to formally thank every little thing that helps me create any given work.

I don’t feel that I work alone—without the support and inspiration of people and things in my day-to-day life, nothing would ever happen. I have no idea how I compose for any of my projects, to tell you the truth. One minute, I might be looking at a pattern on a desk fan coupled with its noise, and then the next thing I know I have a 42-minute full length album that will probably get deleted because I feel that it ripped off the desk fan’s debut album too much.

The cover art for Tchornobog by Adam Burke is pretty evocative—do you work with him to ensure that the visual art fits the music?

Adam is an incredible human being, and his skill for painting can only be matched by his expertise in eating burritos. With him, it is always professional correspondence matched with what I assume is curiosity about musician’s ideas. I also imagine he gets many submissions that ask him to draw a flaming skull in space and to ‘Do whatever man, you’re the artist.’ But that’s beside the point. Working with Burke on the Tchornobog cover consisted of a series of long e-mails that I sent to him, elaborating on the story. Generally, when working with any artist, I describe a very particular scene, or a visual from the story as whole. Adam, however had brought forth nearly exact visuals that I had seen in dreams, and I can’t thank him enough for it—much less understand how the hell he managed to read through my mental salad.

Tchornobog has been in the works for years—you’ve already completed a second, currently unreleased album. How does it feel to be finally airing something you’ve sat on for a while, and what are your plans for the rest of the material you’ve recorded?

Eight years pass by and not a single second was counted to the day of release. One day, it was just ready to be released, and that was that. In those years, I’ve created many chapters, as well as musical accompaniments to the Tchornobog story, but there has only been one album that I felt was not compromised in some way. A big, red, ornate font spells out the word ‘INTIMIDATION’—this word flickers in the caverns of my skull anytime I think about releasing another Tchornobog album. Sometimes, though, a great and powerful shadow sweeps over these words and flattens them out with a comical wooden hammer. A man who appears to be a garbage collector rolls up the word like a carpet, and then puts it into a recycle bin, where a bright custom cursor from 2005 trails up and clicks ‘Delete.’

You’ve made a clear point to separate Tchornobog thematically from any outside context, instead focusing on deep personal meditation. Can you elaborate on the thoughts and processes that took you to this point?

I’ve moved many times in my life, and with each move, I discard more and more items. Ultimately, I believe it was surrendering myself to my own thoughts and fractured memories, finally free of materialism, that built the foundations of this album. I looked as deep as I could into myself, past the skin, blood, and bones. My memory is flawed and nothing more than my sensory organs sputtering out guesses, but I believe that, during this introspection, my imagination swooped in with its battered wings and embraced me. In my head, I found an adhesive note stuck to a whiteboard next to an unmarked door. It read: ‘A duality between human and… something much different. Its name is Tchornobog.’

For a project so focused in its philosophical and thematic aims, Tchornobog’s sound is dense and labyrinthine. What is the aim of creating something so intensely confounding and overwhelming to the senses?

To me, philosophy is a dictionary of the strife of existence as a human being. Psychology, on the other hand, is about understanding why this strife exists, and how to optimize the human mind to create the least amount of suffering. I bring this up because I do not believe that Tchornobog addresses anything philosophical that hasn’t been brought up before. We cope with trauma in different ways, and while Tchornobog has been a great task to endure, I do not see it as anything but a means to communicate my own troubles to the outside world. As for overwhelming the senses, I’m not actually sure if that was my aim. I’m not so convinced that everyone sees it as overwhelming. There’s some wonderful research happening with out-of-touch tribes experiencing music for the first time, which is finding that dissonant music is actually more appealing to them than what most Western society considers pleasant. Imagine that—a wet dream for the modern black metal fan who so desperately wants to go to a party that blasts the sound of disharmonious guitars and untuned drums.