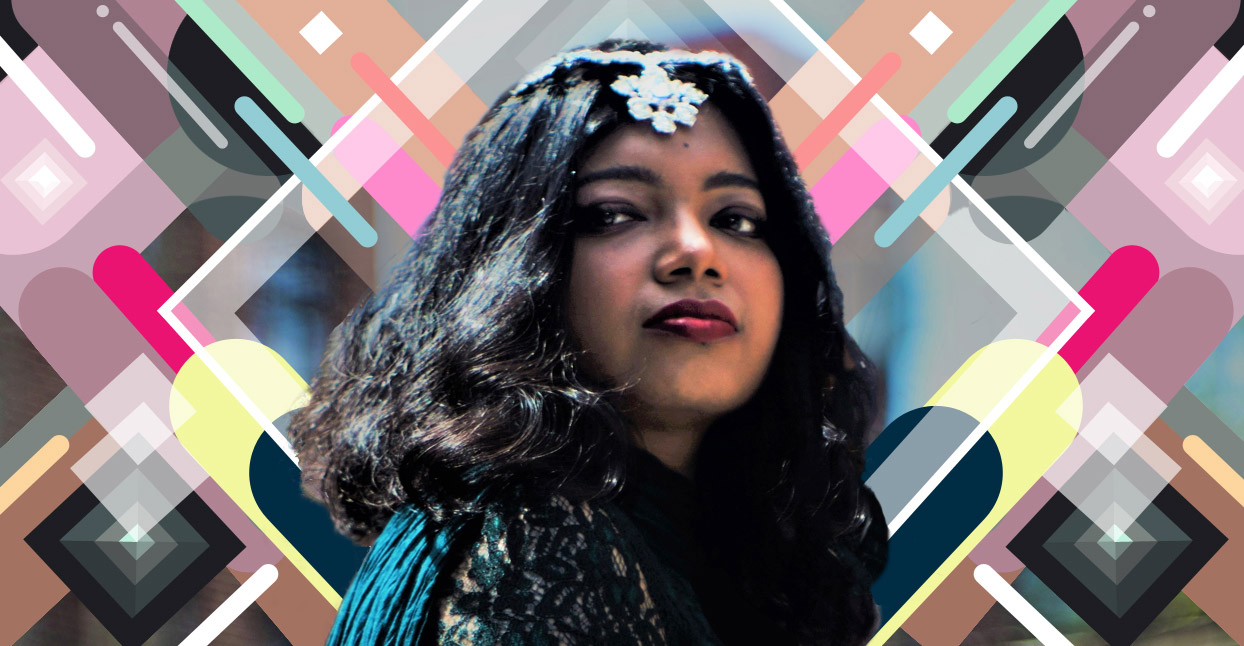 Music is never just music for Sarmistha Talukdar. The Richmond-based non-binary artist, who has been performing as Tavishi since 2016, is neither content with only making aesthetically-pleasing sounds, nor does ze settle for making music that merely carries a message. Talukdar’s compositions—which oscillate between thunderous, fractured noise and sweet, pastoral ambience—might be best described as deeply personal activist sound art that’s entangled in both zir city’s flourishing DIY community (and their much-needed advocacy organizations) and wider, global systems of oppression.

Voices In My Head is Talukdar’s latest album and first release on Chinabot, the London-based label dedicated to highlighting emerging, experimental Asian music. The album’s title, ze tells me from a science lab at Virginia Commonwealth University, refers to an internal daily discourse that pulls Talukdar in seemingly contradicting directions. On the one hand, there’s zir day job as a cancer stem cell researcher. On the other is the India-born artist’s work as a musician, who draws on experimental noise, the raga traditions of Indian classical music, and Julianna Barwick-esque lullaby vocals to create almost impenetrably dense sound collages.

Talukdar synthesizes zir mental monologue on the track “I eat myself alive” using a process of data sonification to convert amino acid sequences into cacophonous distortion; the abrasive textures hint at dark subject matter. “One of the things that [cancer cells] do is eat themselves during stressful conditions so that they can survive,” ze tells me. “When you’re surviving in a community that’s oppressed or oppressive, you’re constantly thinking, ‘Should I hide this aspect of myself?’ You’re silencing yourself so you can go through the motions of daily life. That’s a way of eating yourself, a means of survival.”

While growing up in the seemingly peaceful town of Santoshpur, India, Talukdar implemented similar coping mechanisms, an attempt to process zir own sexuality in a country that, until September 2018, classified same-sex relationships as illegal. “I didn’t accept myself as being queer,” ze says openly. “I grew up in a very patriarchal family. It was so intense, and knowing that I was not like other people—knowing I didn’t fit heteronormativity either gender-wise or attraction-wise—I just tried to forget parts of myself.” But alongside those challenging memories, Talukdar also brought over field recordings from zir hometown to the States, some of which are featured on Voices In My Head. On “Satymeva Jayate,” chants recorded at the religious festival Durga Puja emerge from the track’s raucous percussion. Talukdar remembers the festival’s brightly colored decorations, the resplendence of gold, and the fragrant dhoop, an Indian incense.

Voices In My Head is powerful partly because it conveys the knotty heaviness of life, layers of meaning interpolated between discordant, thick textures with lighter, sometimes even wistful moments. Indeed, the track “Not all struggles are visible” poignantly hints at Talukdar’s own experiences. Quiet manipulated vocals and glassy synths are cut short by harsh, delayed drums. The sounds of stretched strings and grinding metal ratchet up the tension—an audibly painful interruption—before dissolving into a peaceful sea of quiet drones and shahi baaja, an Indian classical instrument.

Since 2013, Talukdar has become embedded within Richmond’s welcoming DIY community, one that has helped zir both explore and accept zir own queerness. Groups such as the Softweb Collective and Great Dismal regularly host nights of experimental music, often to fundraise for grassroots organizations such as Virginia Anti-Violence Project, Nationz Foundation, and Advocates for Richmond Youth. Such initiatives ensure that music is more than just “mental food,” instead tapping into resistive and affective potential, particularly where major gaps in state or local governance exist. More bleakly—as observed by Talukdar’s own profession in healthcare research—these fundraisers help to serve people without medical insurance, as well as individuals who seek surgery to help them feel less dysphoric about their bodies. Ze simply describes the situation as disheartening.

In spite of everything—from intense, personal circumstances to what Talukdar perceives as the daily barrage of apocalyptic news—Voices In My Head ends on “Ether surrounds,” a tranquil, shimmering ambient track. With its softly wavering tones, the song is the aural equivalent of a cocoon, not only as a place of refuge but a space to grow. “It’s a resolution for the album,” ze says, smiling. “It’s about having a place where you belong. You might go through a lot of upheaval in your life, but hopefully you find a happier, peaceful situation in the end.”