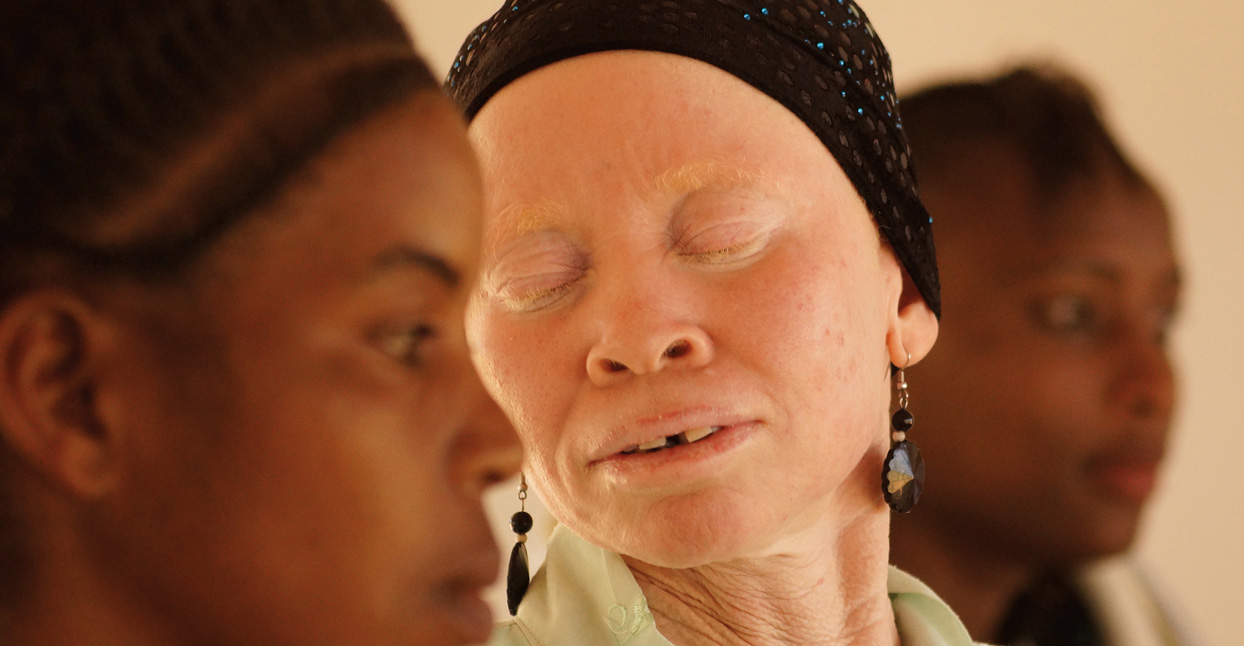 A delicate, hypnotic voice opens White African Power, the first album by Tanzania Albinism Collective, setting the tone for a record built equally on raw vocals, and lyrics that speak candidly of personal tragedy. “The world is hard, and I’m feeling defeated,” singer Christina Wagulu laments in Swahili. “Hatred, jealousy, and other emotions damage my heart / Disease weighs me down like defeat.”

The album’s 23 short songs create an atmosphere intimacy—as if the listener were eavesdropping on a gathering of friends. Far away from those who have shunned and persecuted them, the musicians are unguarded; they sing about the adversity they’ve faced without wallowing in self-pity. Their music is visceral, cathartic, and deeply personal.

Life has not been easy for these musicians, all of whom were born with albinism, a genetic condition that robs the skin, eyes, and hair of pigment. In rural Tanzania—like much of Sub-Saharan Africa—albinism is often seen as a curse that carries with it dehumanizing myths and dangerous superstitions. Some believe albino body parts are good luck charms, able to cure diseases and bless those who own them; the birth of an albino child is considered a bad omen that will bring poverty and disease to a community. Because of the health challenges they face, as well as the discrimination and structural violence to which they are subjected, albino people some of the most vulnerable in Africa.

“The project in Tanzania was one that we were interested in because of the horrible persecution,” says the record’s producer Ian Brennan, who also helmed Tinariwen’s 2012 Grammy-winning album Tassili, and the Grammy-nominated Zomba Prison Project’s I Have No Everything Here.

The album began to take shape in 2016, when Brennan traveled to Ukerewe, the largest island in Lake Victoria. Life is different for albino people here than it is in the rest of the country. Local lore holds that families used to abandon their albino children on Ukerewe, and that others who fought to survive on the mainland followed and found refuge. Over 80 albino people now live on the island, and there has never been a violent attack or murder. But while violence is rare, discrimination is still omnipresent.

“When I proposed and married my wife, her family did not accept me,” says Riziki Julius, who sings on the album. “They said that I was just a ‘pig,’ and could not be a husband to their daughter. I was happy my wife decided to stick by me. She still gets criticized by relatives and friends for marrying a person with albinism.”

When Brennan arrived on the island with his wife, the photographer and filmmaker Marilena Delli, he was shocked by the extent to which the albino community had been ostracized. In partnership with Tanzania-based NGO Standing Voice, Brennan and Delli put out a call for volunteers to participate in a music project. Eighteen people responded, and only one of them had played music before. “What we didn’t know is that they were also discouraged—or even forbidden—from singing and dancing in church, the one place that has traditionally offered sanctuary to oppressed communities,” Brennan says. Initially, the members of Tanzania Albinism Collective were too afraid to pick up instruments or sing. “There was such a lack of confidence—almost a total shut down of creativity,” Brennan claims.

To combat this, Brennan handed out instruments and encouraged the volunteers to take them home, on condition that they try and compose a song each night. With each new effort, their songs improved and slowly, themes of loneliness and alienation began to emerge in their writing. The lyrics are written in Swahili—Tanzania’s official language—as well as Kikirewe and Jeeta, two dialects which have been discouraged and repressed since unification in 1964.

For the first time, members of the collective were able to tell their stories through music. “The project showed us we could do things we never thought possible,” Julius says. “I love music. I enjoy the opportunity to express myself through singing.”

Brennan was less concerned with the band’s lack of formal music training than he was with their lack of confidence. “It’s a very Western idea that input equals output. It’s wrong to assume that in order to be a good musician, ‘I have to listen to this person and that person, or I have to be taught,’” he explains. “Good musicians are good because music comes from inside of them.”

Although they only began singing and playing instruments during the making of this record, the members of Tanzania Albinism Collective have produced an album that is utterly unique, one that lays bare the lives and souls of people the outside world would otherwise know little about. Throughout, the vocals are raw and sometimes fragile, but they’re also powerful and defiant. “I don’t think you can listen to the vocals on this record and draw similarities with any other singers,” Brennan says. “They just sound like individuals expressing themselves in a way that has not been influenced by capitalism.”

From its inception, the purpose of the project has been to raise awareness about the plight of albino people in Africa. During our conversation, it becomes obvious that Brennan is insistent that projects like this one not be mistaken for exotic trinkets—oddities to be viewed through Western lenses. He talks at length about the musical underrepresentation of certain world regions, and how this reflects society’s greater inequities. “I hope that people can begin to embrace artistry and original voices for what they are, regardless of what language they are singing in and of where they come from,” he says.

The album is already starting to accomplish those goals. In July, five members of Tanzania Albinism Collective are due to travel to the U.K. to perform at WOMAD, a festival which celebrates music, dance, and art from all over the world. WOMAD will be the first time any of them will have performed on stage, boarded an airplane, or left Tanzania.

On “Happiness,” the album’s final song, volunteer group member Thereza sings, “Here we are on the stage / Tanzania Albinism Collective members/ Far across the ocean / We are shaken by the waves.” In the context of the upcoming WOMAD trip, it feels both prophetic and cautionary: the promise of things to come sitting side by side with the harsh reality of the present.