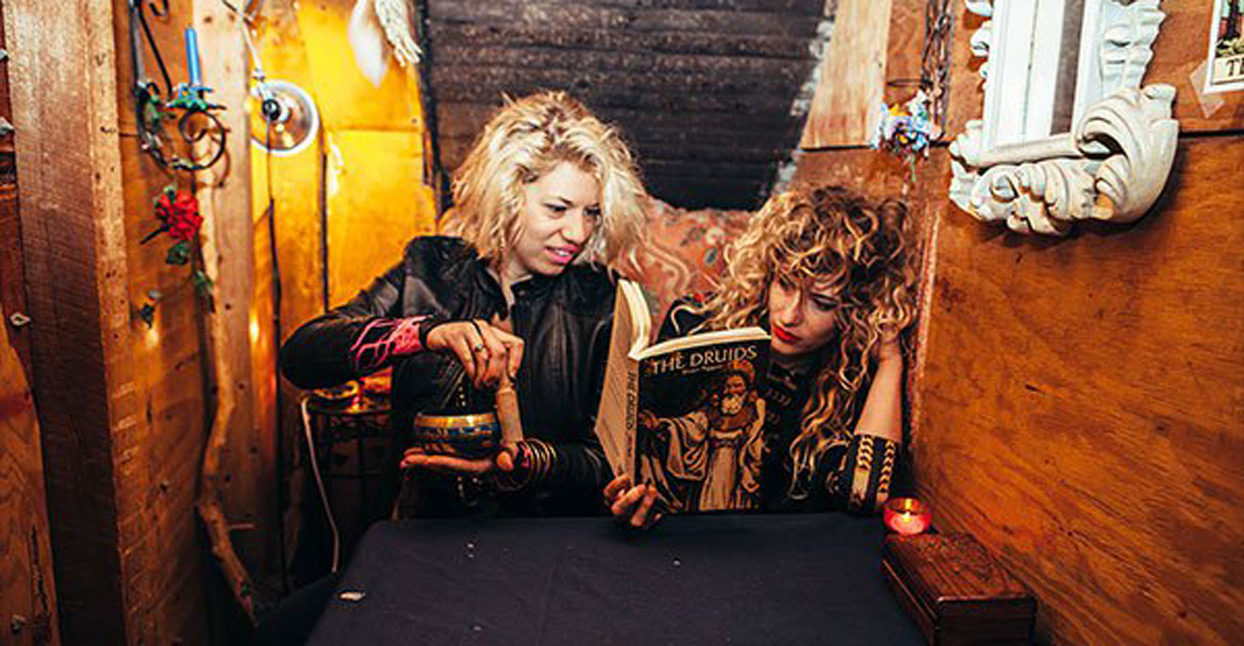 “I had an ex-boyfriend who was a poser Gemini. I think he wished he was a Gemini because he was secretly a boring person.”—Taraka Larson

Sometimes spiritual visions take the form of a conversation: Christ appearing to the apostle Paul on the road to Damascus, or Mohammed being visited by the angel Gabriel. Sometimes they’re astrological, like the Buddha’s wordless vision of the entire universe. And sometimes they just consist of a bunch of dudes skydiving, using a 16th-Century masterpiece as a parachute. That last one is the vision that appeared to Taraka Larson, one-half of the Brooklyn duo Prince Rama, as she lay passed out in a Viking ruin in Estonia while shooting the indie film A Spell to Ward off the Darkness. “Essentially, I had this out-of-body experience,” she says, “where I started having these visions of extreme sports. I became this radio receiver, and I was hearing all of this music from who knows where. Paired with that were these visions of people jumping out of airplanes, wearing Mona Lisa parachutes. I was seeing this future vision of extreme sports merging with high art – it was forming this new aesthetic language of speed. The music was to provide the metaphysical score of this. It was transmitted to me that I had to translate this, and make the music for extreme sports of the future.” She pauses. “I kind of had writer’s block for months after that.”

Taraka eventually overcame her writer’s block, and she and her sister Nimai channeled her vision into Xtreme Now, the eighth—and easily the most visceral—Prince Rama record. During the making of Xtreme Now, the Larsons dove head-first into the world of extreme sports, downing endless cans of Monster Energy drink, imagining a future where high art collides with corporate sponsorship, and finding a thread deep in the culture of extreme sports that linked back to the metaphysical and philosophical concerns that informed their earliest work. “To be able to do these activities—base jumping, skydiving, skateboarding—you need to perform rituals beforehand to get your body and mind strong. It’s not just about believing in yourself, it’s trust. You’re like, ‘This is gonna work out, because it has to, and I absolutely know it will.’ It’s literally: be here now, or die. It’s Ram Dass to the extreme. It’s the ultimate form of Zen meditation.” The songs reflect that frenetic energy, whooshing by like jet planes gilded in neon, blinding dance songs with hooks that sear like cauterizing pens. But for all of its high-gloss shine and big, beaming choruses, Xtreme Now has an unlikely patron saint. “We both think Fred Durst is just great,” says Nimai. “We straight-up lift a Fred Durst lyric in one of our songs. I actually think he’s really smart. There’s just something amazing about that pure, raw honesty, that ‘I don’t give a shit.’ I mean, ‘Fuck’s just a word, and it’s all fucked up’—That’s so true! He just hits the nail on the head.” Taraka sums it up nicely: “He’s the ultimate bro,” she says. “And we want to reach out to bros.”

Knowing the duo’s affinity for the occult and the metaphysical, we took them to Catland Books in Brooklyn to sample some of their offerings.

Nimai: I just want to smell some Saint John’s Wort and be in the best mood ever. Isn’t it supposed to be an anti-depressant? I feel better already! Vaping the St. John’s Wort. We should do this before every interview. Or when we first wake up. Which one should we try if we want to get our day started in a really aggressive way?

Taraka: Something I like to do on first dates is go to Whole Foods, or some place that has a lot of different-smelling things, and just close your eyes and try to guess what the different smells are. You learn a lot about a person that way. You get to know someone a lot better than swiping right. It’s fun, because on dates there’s so much pressure to do all of these things for your taste buds or for your visual and audio senses, but no one remembers smell. So you go on a little Scent Safari, and you feel like you traveled a lot of different places, but you’re just in one place the whole time.

Nimai: I was at the Whole Foods once doing my grocery shopping and I ran into Taraka on a Scent Safari. I was like, ‘I need some produce,’ so I walked over to the produce aisle and saw two people bent over, smelling all of the fruit. I was like, ‘Who are these weirdos?’

Taraka: Here’s a fun Scent Safari. You have to close your eyes and guess what astrology sign this is.

Nimai: It’s minty, so it must mean someone who’s crisp, who has their shit together. But it also reminds me of toothpaste, so I’m saying Virgo.

Taraka: I had an ex-boyfriend who was a poser Gemini. He was on the cusp, but I think he wished he was a Gemini because he was secretly a boring person.

Nimai: What’s anointing oil? ‘For home, ritual and bath.’ I think the ritual is that we all have to try this at the same time. Everyone put your left hand out.

Taraka: What’s it going to do?

Nimai: I don’t know. I’m just assuming they’re not going to give us something that’s fucked up. It’s all-purpose, so it’s whatever we want it to be for. I think our oils all have to mix – that’s what rituals do. Everyone form a circle and clap your hands together after I drip the oil in.

(The kind and patient people at Catland informed us that it’s for dressing candles and for spells.)

Taraka: There are some great symbols in here. A lot of these would make really great tattoos. I think that, in general, these sort of metaphysical texts and alchemy and stuff all dives deep into the heart of any religion and tries to extract that seed that’s deep within those different shells. We were raised with a Hare Krishna shell, but learning about this stuff helped me get into more mystical things. And it’s something you can apply to anything. The shell you apply the teachings to can be anything – it can be the concert space. It just helped us to make some sense of that. When we started Prince Rama I was living on an ashram, fully committed to being a monk. And then someone gave me a keyboard, and I wrote the first Prince Rama song instantly. And I got this transmission that was like, ‘You have to get out of this place. This isn’t what you’re supposed to be doing. Why do you think this temple is the only temple? There are so many other temples you can use.’ It’s more fun to find the spiritual in the shells that don’t appear on the surface to be mystical. We’re in an occult bookstore right now, so everything has an aura of mysticism about it. If we were just at a Barnes & Noble, it might be harder to get into that space, but I would be interested in trying to find it.

Nimai: If we were at a Barnes & Noble, I’d be reading a Giada cookbook instead of Cooking for Trolls.

Taraka: I think that on a surface level, some of this record is a response to bands that get sponsored by different corporations. We were like, ‘Wouldn’t it be more fun if it were the other way around, and the band was sponsoring the corporation? And we got to have creative control over how we advertise them, and we got to be the ones in power deciding how we were going to use their logo, and what association we had with it?’ It was kind of a way of taking the power back and subverting the paradigm.

Nimai: We were in the middle of doing this installation for the Whitney and we wanted to create the Whitney Biennal 2067. Thinking about the state of art in the future, I think art museums are going to start to lose funding and get sponsored by corporations. We thought by putting up a bunch of fake corporate banners, it would look very much like the future.

Taraka: And on an alchemical level, Monster Energy drinks—even their motto, ‘Unleash the Beast’—there’s a lot of symbols within that which link back to a lot of mystic, pre-Christian traditions. Thinking of Monster Energy as almost this demon elixir—unleash these inner monsters. Monster Energy drinks are definitely something we incorporate into our ritual of songwriting. By drinking a lot of it.

Taraka: I walked into a Santeria shop a couple of years ago. We were having ghost issues and I said, ‘I’m just going to go to the Santeria shop and see if they can help.’ So I walked in and the woman helps me out and then as I’m walking out she says, ‘Are you expecting?’ And I say, ‘Um, no.’ And she just says: ‘Soon. You got twins in your family?’ And we do. And she just said, ‘Yeah,’ and then paused, and just said, ‘Bye!’ I was like, ‘What!?’ It kind of fucked me up for a while!

Taraka: Utopia isn’t a place that’s defined by some sort of territory. It’s an abstract ‘no place.’ So whatever you can do to access that space—and that space can be delineated by the rings of a record, and wherever that’s placed, it creates a portable utopia that’s revolving at its own orbit. And we sync ours up to it in that moment. I feel like writing this album was trying to create a new space that’s some sort of reflection of utopia, filtered through our own experience.