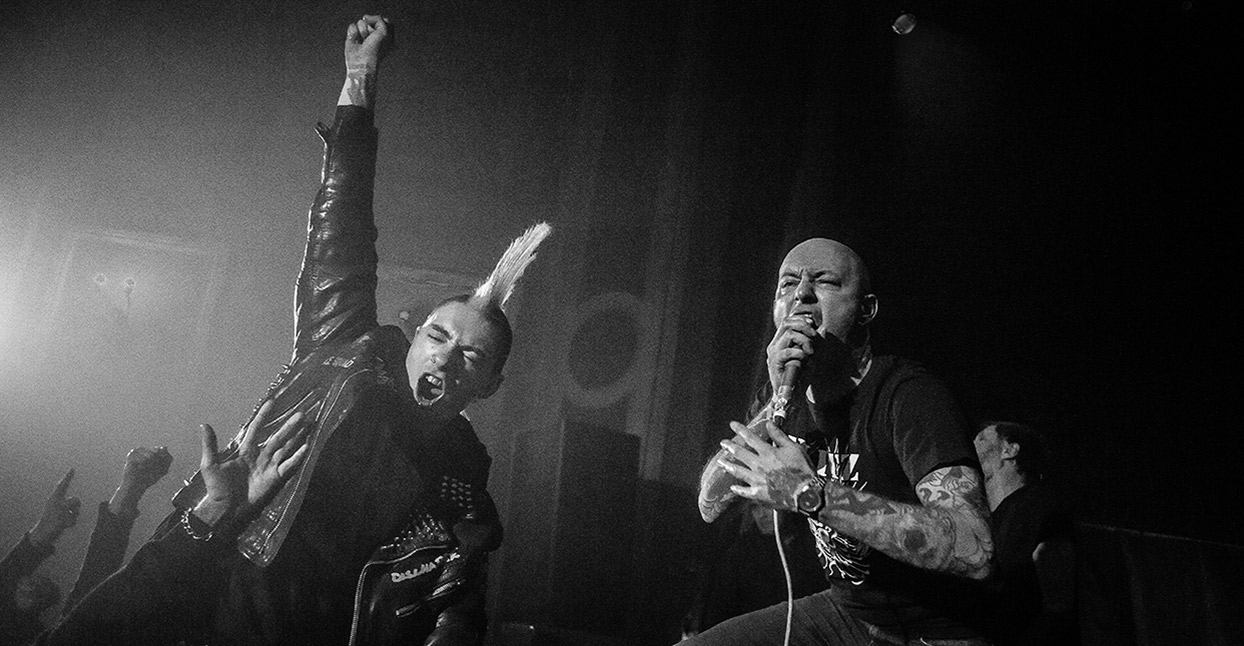 Punk has long been a vehicle of resistance—an outlet for those who feel themselves on the outside to shout their fears in the hopes of changing the way people think. It’s a grassroots movement so it’s not always easy to get to the heart of the major players. And while the British and American variants are arguably the most well-known, many of punk’s earliest practitioners also came from Europe and, specifically, Sweden.

From the ashes of two pioneering bands, Stockholm’s Mob 47 and Gothenburg’s Anti-Cimex, came Wolfpack, who changed their name to Wolfbrigade around the year 2000. Over the years, the powerhouse has included members of Asta Kask, Anti Cimex, Obscure Infinity, and Harlequin. Despite any changes in membership, the band’s vision has remained consistently entrenched in the pummeling sound of global resistance, using thickly-distorted, wall-of-sound guitars, classic d-beat rhythms and harsh, pleading vocals. Before the release of their upcoming LP, we sat down to chat with vocalist Micke Dahl and bassist Johan Erkenvåg about globalism, the rise of fascism and punk’s response..

As the world changes, I wonder what changes you’ve seen within the punk scene. Going back to the early days of Swedish punk rock, what has changed about your approach?

Micke Dahl: We don’t have that kind of insight into the global punk scene, and I don’t think we ever did. But I get the feeling that our part of the punk scene has shrunk rather than grown these last few years. As the world becomes a worse place, people turn angrier, stupider and more introverted. Punk should be growing, but instead it’s all the bad shit that seems to thrive. Punks themselves need to have a more open approach. There’s a lot of “fuck you” type of elitism these days. A scene that once was, and should be, open to people, is now very judgmental and inaccessible—which is very unfortunate in times like these, when subcultures should join together instead of bashing each other.

Johan Erkenvåg: The music has always been at the forefront for us, but all members in the band have an interest in politics, and that shows in our lyrics, and the places and events we choose to play. There is no special political lean on this album that sets it apart from our others.

It seems like the globe is being blanketed in this cloak of populism that has actually allowed for the rise of fascism. Given your long history as a band, do you see this transition as something new?

Dahl: It’s new for us to see it happening in our country, but not new for the world. You just need to look back a bit in modern time to find a Europe that was very fascist. I don’t think I need to mention examples such as Germany, Spain, etc. What we are experiencing now are the effects of globalism. Major societal shifts and changes have always sparked fear and exaggerated reactions.

Erkenvåg: Wolfbrigade has been around as a band for 22 years now, but I must say that the political climate in the world these past few years has been the worst that we’ve ever experienced in our lifetimes. It’s very hard to not lose faith completely. Of course, this affects our songwriting. But on this album, we’ve looked inwards instead of dealing with the apparent problems – it would be too easy. We’d rather write lyrics about co-existing and surviving in a world with Trumps, Putins and Wilders, than writing about them.

Are you seeing any of the right-wing movement growth in Sweden?

Dahl: Unfortunately, we see the same rise of the right wing here as in the rest of Europe. It has just been rising a bit slower. But now, after the recent surge of refugees from Syria, a lot of Swedes have proven themselves to be every bit as conservative and racist as the rest of right-wing Europe.

Erkenvåg: As always, our lyrics deal with social injustice and the misuse of power, but on this album, we’ve turned the focus to ourselves and found that man is limited not only by outer powers, but by himself – which can be just as dangerous. We found a lot of inspiration in dystopian literature, both classics and more obscure titles. The song “Kallocain” has for example borrowed its title from a great novel by the Swedish author Karin Boye, published in 1940. The plot takes place in a future society, where the individual belongs to the state and is under constant observation. But what is more dangerous; oppression or compliance? It felt like a suitable metaphor for the atrocious state of the western world right now; with the rise of the right wing, the rapid decline of the environment, and the black-and-white climate of discussion where people seem to have lost the ability to keep two thoughts in their heads at the same time. I can go on and on here.

Our lyrics have always been a way for all of us to express our frustration of living in this world.

How can music, particularly punk rock and other “anti-establishment” types of art, help us join people together to resist the seemingly radical shifting of global politics?

Dahl: To achieve any sort of impact on the way things are heading, we need to reach out further. Reach out to them who we normally criticize for not being critical enough. Harsh words aren’t taking us anywhere anymore. People need to be educated about what the real injustices are, and how they work. We all live with our own set of blinders. Punk rock and other alternative movements only have a limited reach. To change the way the world is heading now, we need to work outside of our own limits and values.

Erkenvåg: In many ways, the punk scene suffers from the same bigotry as the rest of society. There are a lot of good values and thoughts, but somehow it all gets stuck. The punk movement started out as something liberating; do what you want, be who you like! The punk scene creates no major changes to society, but in the best cases, it leads to personal change.

Finally, with your years of experience and all your travels among so many different scenes, where do you think we are headed?

Dahl: Who knows. None of us in the band possesses that kind of analytical ability. But honestly, I think we’re fucked and that nothing will get better. If anyone could make it better, then Trump would have been dethroned after his first day in power. Russia is expanding more and more. Turkey is now threatening The Netherlands. It’s total mayhem. Of course it won’t get better. We might get by OK here in Sweden, but big parts of the world will be devastated. But we will keep on making music to keep our heads up, it’s the only way.

Are you excited to make music in a post-apocalyptic society?

Erkenvåg: Even though we all love the Mad Max movies, we all prefer to take hot showers in our comfy apartments. So, very low excitement level for making music after the apocalypse. And Wolfbrigade won’t survive without electricity. We will never go unplugged!