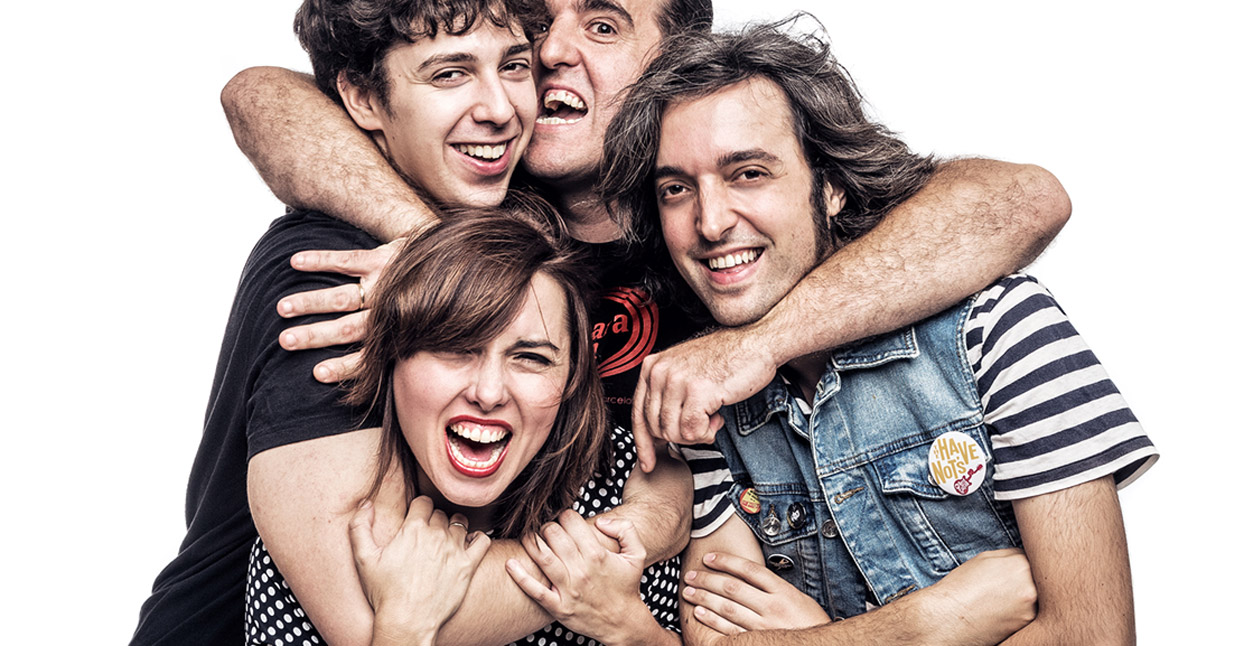 Despite its institution-shredding reputation, some of the best punk rock has been produced by married couples: TV Smith and Gaye Advert of the Adverts. John Doe and Exene Cervenka of X, Lux Interior and Poison Ivy of the Cramps. Thurston Moore and Kim Gordon were the parents of Sonic Youth; Ira Kaplan and Georgia Hubley of Yo La Tengo, Jon Spencer and Cristina Martinez of Pussy Galore and Boss Hog… the list goes on. Intimacy, and its inherent tensions, can sometimes inspire creative groundbreaking and raw rock fury.

The core of Spain’s Suzy & Los Quattro is vocalist Suzy Chain and bassist BB Quattro, who have been married since 2010 (the band has been around since the early 2000s). The band is a pop-punk four-piece with four albums and a singles compilation to their name, including the brand-new Faster & Louder! Their first full-length, Ready to Go!, was released in 2005, and established their sound: a blend of the Ramones, the Beach Boys, and Blondie, with lighthearted English-language lyrics and a cover of the Go-Gos’ “Vacation.” Their second album, 2008’s Stick With It, followed multiple line-up changes, and showed artistic growth, incorporating elements of glam, disco, and more (it closed with an a cappella doo-wop tribute to Henry Rollins). Their third album, Hank, released in 2012, was dedicated to celebrating the memory of a longtime friend of the band who’d been murdered. Now, as the title of Faster & Louder! indicates, they’ve returned to their roots with an album full of fast, punky pop songs.

Chain answered questions about music, couplehood, and combining the two via email.

You took almost five years between Hank and the new album. What happened—was it just that life got in the way of the band, or something more serious?

Suzy Chain: The main reason is our daughter Matilda arrived in March 2014. The last tour we did before Matilda showed up, I was five months pregnant (11 shows with no days off with our friends The Havenots, from Japan). And the first tour we did after Matilda was born, she was six months old and loved being on the road! Then, it was time to start working on new songs; of course the logistics for everything band-related are more complicated now, but here we are with a new album and new tour dates.

This is your most aggressive album since Ready To Go—what made you decide to return to such a punky style?

Making an album like Hank was a necessity more than a choice. We wrote half of the album and found out all the songs were talking about different phases of how we were dealing with Hank’s death, so we decided to make an album telling the journey, in the right order, from the day we knew Hank was dead (“Freak Out”) to the moment when we realized we had to let the guy go (“The Goodbye Song”). Of course, I wish we never had to write those songs, but doing it was good for us. Playing those songs live was, and still is, painful and wonderful. After such an album, we felt like we needed to make the rawest, most in-your-face album we could come up with. So what if some songs are barely a minute long and talk about premenstrual syndrome or telling someone to fuck off?

Hank was named in tribute to a friend who was murdered, and “Radio! Stereo!” on the new album is dedicated to him, too—can you share that story, and talk about what he meant to the band (quite a lot, obviously, if you named an album after him)?

Hank was our best friend and came on endless tours with us. Amazing guy, loved his art, his rock ’n ’roll, his jazz and prog rock. A unique character who made the world a better place. He went to a show in Barcelona, and on his way back home was attacked and stabbed to death for no reason by a gang of brainless idiots. Still makes my heart sink to think about something so unfair and unnecessary happening. The friendship we had, we still have, with Hank, was kind of like the ones you see in movies such as Stand By Me, or even The Goonies. “Radio! Stereo!” might be the last one. Or maybe not? We feel like the guy is around us in some ways, but obviously wish he would be here in the flesh.

You and BB are married as well as bandmates—how does that work when it comes to the democracy of running a band? Is that why you change members between albums, do you think—because the others are automatically outvoted?

We get a lot of “Oh, it must be wonderful to be in a band with your partner,” but it’s far from being fairytale-ish. We usually never behave like a couple when on tour; we sit far away from each other in the tour bus! Touring can be stressful, it often is, and you’re gonna lose it with the one you have more confidence in. But it’s cool, we’ve been in this together for almost 15 years now, and it’s been a learning process leading to a “now” where we really enjoy being in this together. But we live for the band feeling, not just the two of us, but four individuals with the holy mission of getting it done every night, no matter what. We make a big hug before going onstage, say something positive and move in for the kill! Band members… look, we’ve played almost 300 shows all over the world, coming back home with no money most of the time, and it’s just normal that after three or four years, people will decide to move on to new, less demanding projects, or even quit music. Nobody gets outvoted, each opinion counts and it’s four of us. Our votes don’t count extra! And hey, Marky has become the first ever Quattro (non-BB, that is) to play on more than one album. He’s been with us for eight years, so give us a break! I think people forget how long we’ve been doing this.

Stick With It is a really eclectic album, covering a wide range of musical styles, extra instruments, etc., etc. Was it more difficult to produce and record than your earlier work?

Stick With It was the first album produced by Robbie Rist, and much as he loved our punk-pop style, he was constantly pushing us to try new stuff. So you like glam rock? Write a song that Slade would do! You like disco? Go Blondie! We owe Robbie so much, he’s done a brilliant job producing SWI and Hank. And his imprint is obvious on Faster & Louder too; he plays some guitars and helped us pre-produce the demos. We would absolutely have used him again had he been available, and we’re planning on sticking with him in the future… he’s our George Martin!

Do you decide to make an album and then write a bunch of songs, or do you write songs one at a time until you have enough for an album?

We’re very busy outside the band too. Lots of tours, lots of other projects, now parenthood… BB thinks music all the time, records audio notes constantly and puts them in his secret vault, then when it’s time for a new album he will take all these bits and pieces and write a bunch of songs, make demos, show them to the band, rehearse a bit and into the studio we go! A couple songs on the new record we almost finished in the studio.

You’ve toured Europe, the U.K., and Japan—do you have plans to come here, or are you planning to wait until Trump is out of office to tour the U.S.?

It’s so dreadful what’s happening in the U.S.A., but I always say we have a mini-version of your problem in our own country. We have been and presently are ruled by corrupt politicians who loot the country, piss on our face and tell us it’s raining. And the worst part is people are so scared to lose the shit jobs they have that they will keep voting for this scum because they think it’s their best option. Our president is a joke (does that sound familiar?) and much as we hate Trump, we’re in no position to lecture your country about anything. I just hope some good will come out of this, motivate people to do good things as a reaction to all the bigotry and fanaticism above us. Back to the subject, we would love to play in the U.S.A., we have lots of friends on both coasts and would be delighted to do it, hopefully in the future!

To your knowledge, has Henry Rollins heard your tribute to him?

BB plays with TV Smith (The Adverts), and Henry ia massive fan of TV. We did send him our album and I guess he heard it, but we never heard back. I’m such a big fan of his, I won’t take it personally! He’s not the kind of guy who would write back and say he loved the love song aimed at him, is he?