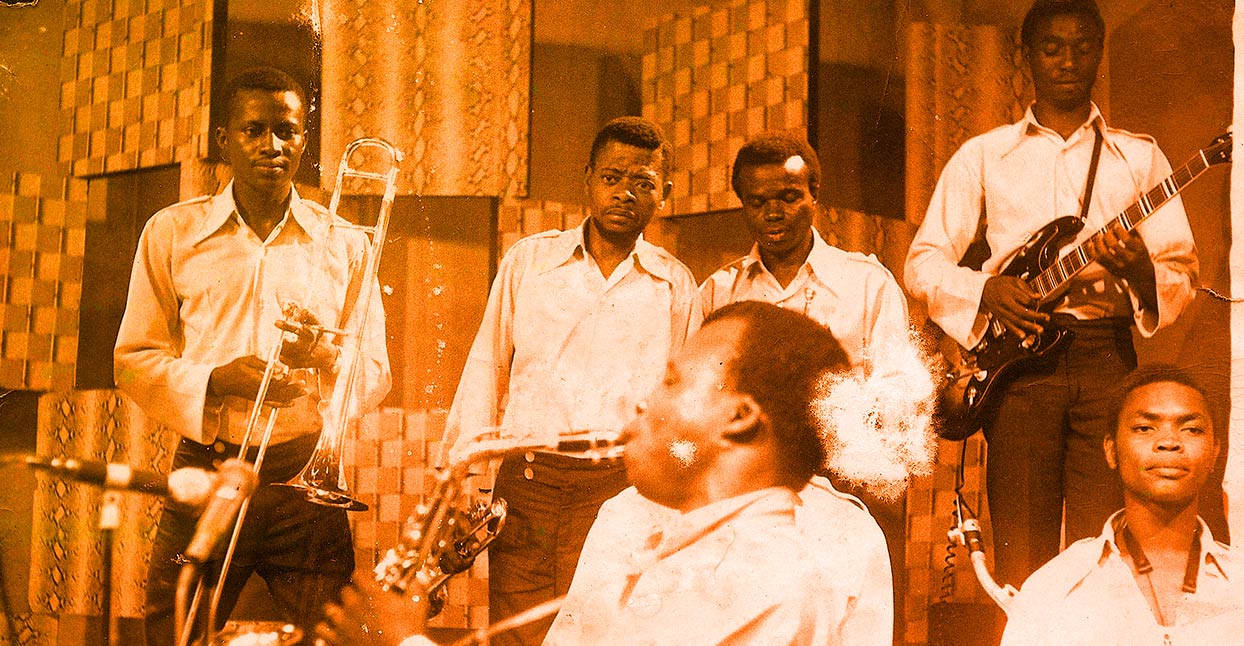 From the sunny melodies of highlife, to the dissonant sounds of post-war rock, to the black consciousness in Fela’s Afrobeat and the slick acoustics of Afropop and disco, Nigerian music in the decades following independence experienced rapid and exhilarating change. It didn’t take long for the rest of the world to take notice: King Sunny Adé and Ebenezer Obey became international superstars thanks to their takes on jùjú music, while Fela Kuti’s outrageous showmanship and political activism made him the unrivaled King of African music.

Much of this musical experimentation was taking place in Lagos, where a booming economy and post-independence optimism combined to create a vibrant club scene. Some kingpins of the Lagos scene became international stars, but others remained virtually unknown outside of their home country. Over the past 20 years, however, their work has enjoyed renewed attention thanks to London-based label Strut Records and their pioneering compilation series Nigeria 70. The first volume, 2001’s The Definitive Story of 1970’s Funky Lagos compiled tracks by artists like Fela and King Sunny Adé, but also included their lesser-known peers, like Afro-rock group The Funkees, Afrobeat twins Lijadu Sisters, and the until-then mysterious William Onyeabor, who has since become the stuff of legend thanks to a successful revival project by the Luaka Bop label.

The volumes that followed—2008’s Lagos Jump and 2011’s Sweet Times—continued the deep dive into rare jams, shining a light on different sides of Lagos’s astonishingly diverse scene, from psychedelic rock to electro-funk and disco, and the ever-changing blend of traditional guitar highlife and jùjú with jazz, funk, and soul.

The newly released fourth volume, No Wahala: Highlife, Afro​-​Funk & Juju 1973​-​1987, returns to the vibrant heyday of Nigerian music, but shifts the focus away from the Lagos scene to other regions of the country. “I decided to push [this volume] out to the Delta region and the Abuja area, to lesser-known artists, and different guitar highlife traditions,” explains Duncan Brooker, the British DJ and collector behind the Nigeria 70 series. “These stories are equally important, and have to be told. It was a terrific scene in its own right, but was always overshadowed by the Lagos scene.”

Doing It in the Delta

While it may have lacked Lagos’s famous clubs and cosmopolitan crowds, the Delta region, which is populated mostly by the Ukwuani people, had its own active music scene. Among the most prolific musicians was Rogana Ottah, an Ukwuani guitarist who started his career in the early 1970s with Charles Iwegbue. Ottah played with musicians like Rex Jim Lawson before eventually forming his own band, the Black Heroes International, in 1976. Ottah’s first major hit as a solo artist was his 1977 LP Ukwani Special, which propelled him to the forefront of the Ukwani music scene.

Ottah’s music might lack some of the grit and fire of the Afro-rock and psych-funk bands getting hips swaying in post-war Lagos, but his dazzling guitar playing and insistent rhythm section became part of the Ukwani highlife style, and never failed to draw a crowd. “Let Them Stay,” Ottah’s contribution to the Strut compilation, is a relentlessly danceable jam, a rhythmic frenzy driven by Ottah’s hypnotic guitar riff and intense percussion. Elsewhere on the compilation, Steady Arobby’s International Brothers Band offers another killer Ukwani dance track with “Onuma Dimnobi.”

With music like that, the Delta region was hardly low-key. In fact, when major labels started pulling out of Lagos at the end of the 1970s, the independent music scene in the Delta region flourished, with local businessmen setting up small labels and releasing the work of local musicians. They might not have been going on international tours, but they were stars in their own right.

“Most of the Delta musicians were always traveling, and these are vast swaths of land, so they were on the road pretty much all the time, going from hotel to hotel for concerts,” explains Brooker.

But the Delta circuit wasn’t just limited to highlife: in Abuja, the diminutive Don Bruce filled dancefloors with his scorching shows at the Hilton Hotel, where he performed classics by Western soul men such as Otis Redding, and adapted traditional Delta songs like “Wa Do!,” adding his own funky twist. “He was a great entertainer, he could sing James Brown better than James himself,” recalls Orlando Julius, the veteran saxophonist and pioneer of Afro-soul and Afrobeat (his song “Alo Mi Alo” was featured on the first volume of Nigeria 70).

Julius was so impressed with “The Don” that he invited him to play with him several times during his long-standing residency at the Independence hotel in Ibadan. “We were happy then. We played jazz and soul, fusing [them with] our indigenous sounds to create modern Nigerian music,” he remembers, talking over a crackly phone call from his home on the outskirts of Lagos.

Elsewhere, the compilation delves into the connection between Nigeria and Beninese culture, a story which cannot be told without mentioning Sir Victor Uwaifo, who was born in the 1940s in Benin State, Nigeria. He started recording in 1963, in the years just after independence, and by 1966 he’d scored two huge hits with his songs “Guitar Boy” and “Mami Water.” By the end of the decade, he had become one of the central figures in Nigerian music, known for his sonic inventiveness and unique styles.

In 1970, after 13 years in Lagos, Uwaifo returned to Benin City and began incorporating traditional elements into his own music. He experimented with the rhythm-driven sounds of a traditional Benin dance, the Ekassa, bringing them to life through modern instrumentation and mixing them with soul and funk. “Victor Uwaifo has created many modern styles based around rhythms from that area,” says Brooker. “It’s very similar [to other types of Nigerian music], but his sound has its roots in the Benin traditions.”

Uwaifo still lives in Benin state, and has become something of a living legend. His website states that he is “a multifarious and highly talented individual, internationally award-winning music maestro, artist, sculptor, engineer, academician, Ph.D. scholar, sportsman, bodybuilder, poet, and philosopher.” Despite his long list of accomplishments, he still finds the time to perform in live shows around the city, with the same energy and showmanship he built his legend on.

“He’s a great musician, as well as an artist,” says Julius, who calls Uwaifo a good friend. “When I returned to Nigeria [after an international tour], Victor Uwaifo was a Minister for Culture in Edo State, and he came with his official car and sirens and escorts to greet me!” he recalls.

Half the tracks on No Wahala were produced in 1980s, a decade so far untouched by the series. “It shows in some ways the progression of the Nigerian sounds, and what the compilation series is about,” says Brooker. “Obviously, everything is interlinked, so the music will always reflect the political and the economic state of Nigeria. There are tracks on all volumes that reflect what was going on in those years.”

In the 14-year period between 1973 and 1987, Nigeria experienced a vibrant musical revolution and economic boom fuelled by skyrocketing oil prices. But it also saw coups and military rule, a widening gap between the rich and poor, and the curtailing of artistic freedom.

In 1970, the civil war—which had ravaged the country and left an estimated three million people dead, most of them Igbo civilians—came to a sudden end, and Nigeria’s head of state General Yakubu Gowon adopted a “no victor, no vanquished” policy, prohibiting reprisals and urging Nigerians to forget the bloodshed and move on. This was a new country, a federation of diverse states, people, and languages, and it was keen to put the past behind it and look to the future.

And what a bright future it was: in 1971 Nigeria had joined the Organization of Petroleum Exporting Countries, and it found itself in the same ranks as rich petro-states like Saudi Arabia and Kuwait. The oil boom in the wake of the 1973 Yom Kippur War propelled Nigeria to new heights, and it soon became one of the most affluent and influential countries in Africa.

“Between those times the nation was young. We saw our independence, and we were very happy. We all had hope for our country and it was a very patriotic time,” says Julius. “But it was changing! Although the music was hot in the 1970s, politics was doing bad for us, and there was a lot of corruption. Still, Victor Uwaifo, Victor Olaiya, and others still held sway. And Fela always was, and still is, the voice of the people.”

In an effort to strengthen its fragile unity after the civil war and fuelled by its newfound oil wealth, Nigeria embraced pan-Africanism. Messages of black unity and black power soon started to make their way into popular music, most famously in that of Fela Kuti, who had become close to the Black Power and Black Arts movements in the United States.

“At that time [the beginning of the 1970s] there were a lot of problems in Africa,” says Sina Bakare, who harnesses the Pan-African sentiments on his song “Africa,” originally released by Afrodisia. “Mandela was in prison in South Africa, there were riots in Zimbabwe and war in Mozambique, and there was no unity in Nigeria.” He recalls sitting with Fela in Lagos, discussing the need for solidarity among African people. “We always said we have the same red blood, we are the same. That’s how this song came to me.” On “Africa,” Bakare reminds his fellow Africans to support each other: “Black Africa / Let’s fight together / Our brothers and sisters / Let’s plan together / And fight for our rights.”

Elsewhere, Felix Ngasia and his Cameroonian band The Survivals sing about black pride and liberation over a punchy disco-funk groove on the 1980 jam “Black Precious Colour.”

Nigeria’s pan-Africanism came at a head with Nigeria’s Festac ’77, the second installment of World Festival of Black Arts held in Dakar, Senegal. Held in 1977, this version was meant to be bigger and better than its 1966 predecessor, an opportunity for Nigeria to flaunt its wealth and status. For a month, the cities of Lagos and Kaduna were filled with black music, dance, art, literature, philosophy, as thousands of people from the Black Diaspora around the world descended on Nigeria to celebrate black unity and identity.

But this wasn’t the black utopia it was meant to be, and was criticized for its cynicism, corruption, ostentatiousness, and waste. Fela himself was one of the most vocal critics of the festival, and ended up paying for it in a brutal way. Not long after the participants—who included the likes of Stevie Wonder, Gilberto Gill, Miriam Makeba, and Mighty Sparrow—had departed, the military stormed Fela’s compound, brutally beating him and his friends, raping the women and fatally injuring his mother. The attack overshadowed any of the positive achievements Festac might have had.

The festival marked a turning point for the country, and popular music and culture began to move away from genuine African sounds and aesthetics and towards sleekly produced, Western-influenced disco sounds. The oil riches failed to trickle down to everyday people, and poverty rates grew exponentially, and the economic crisis brought with it the disintegration of pan-African ideals.

“The 1980s were different to my eyes. We started losing our identity, just copying Western record,” says Julius.

But that’s not to say that the music stopped: Fela Kuti continued his battle against the corrupt politicians and military, and landed in prison because of it; Orlando Julius returned to Nigeria in 1983 (he was living in the U.S. by that time) to record his video “Dance Afrobeat” in an effort to “promote Nigerian culture and make people proud of their identity,” and he tours internationally to this day; Sina Bakare, who is now 74, never put down his guitar, and like many of the artists featured on No Wahala, still plays regularly in Nigeria.

“People always want to hear us play,” he says. “If it’s something natural and original, they love it.”