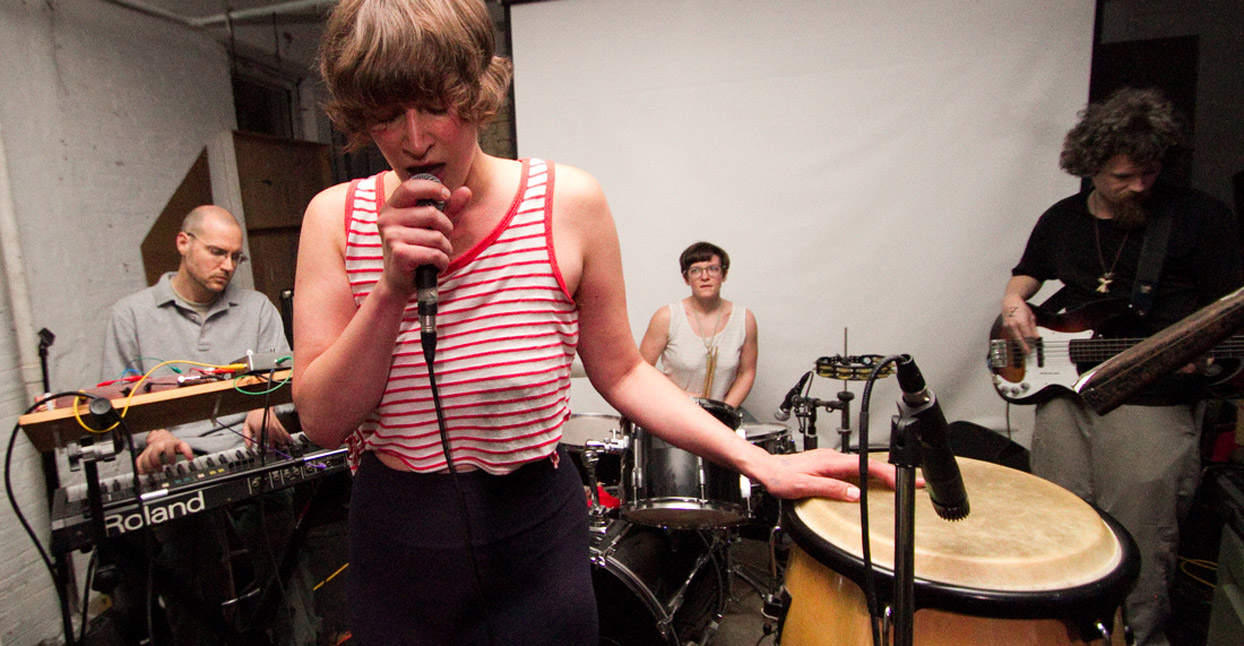 The Baltimore DIY scene suffered a blow recently when one beloved underground warehouse space, Bell Foundry, was shuttered in the wake of the Ghost Ship fire for not meeting Baltimore City Fire Dept’s code. Singer Caroline Marcantoni lived in the Bell Foundry during its early days, and over time she became a consistent contributor to the Baltimore underground arts community as both a dance teacher and record store clerk at the True Vine record store. She’s also an inspired writer and teacher of feminist ideology, and has travelled all over the world in the improvised avant-garde group Strange Times People Band.

We spoke with Marcantoni about her obsession with Betty Davis, how Ghost Ship and Bell Foundry’s fates affected her personally, and why she may be bringing Strange Times People Band to an end.

What did you listen to growing up?

I’ve always been obsessively in love with music for as long as I can remember. It has been the central healing force in my life. When I was growing up I listened to everything: Salt-n-Pepa, Alanis Morissette, Jewel… I also liked Veruca Salt and the Indigo Girls and Jay Z. Musically, I’ve always been all over the place. I’ve always had broad taste.

Well, that makes sense. I do hear a mix of Salt-n-Pepa and Jewel in your vocal style. You have a very percussive singing style. You also sound a bit like Kathleen Hanna of Bikini Kill and Allison Wolfe of Bratmobile.

When I was studying philosophy in college, I became embedded in the arts scene through feminist theory. That was what connected me with the underground music scene in Charleston, so my intro to DIY feminist culture was through this lens. It was super empowering, because the community was grounded in feminist ideology and was interested in raising the consciousness of our group.

At the same time, all of my first bands were all-girl bands.  My first band was called the Di Prima Project—Diane Di Prima was the unsung matriarch of the beat poet generation.  She started a ton of publishing presses and small theater houses, but at the time she got hardly any recognition because she was a woman. I started reading her memoirs and for my first band, a lot of my lyrics came straight from her work.

You’ve been very active in Baltimore’s DIY community since the start of your career. I’d love to hear your thoughts on what’s been happening with Bell Foundry.

I lived in the Bell Foundry when it first started. [The closing] hits me on a couple of levels: there is intention [in living in spaces like Bell Foundry], but I don’t conceptualize my choice to live in a warehouse—and the freedom and it allotted me—as a victimization. My choice to live there was one of freedom. It was finding a place of freedom in the context of oppressive structures. To me, what the [Ghost Ship] fire—and what will be reaped from this tragedy—is exposure, similar to the Trump election. It’s exposure of a hidden force and underlying current that is collectively being creative, where artists are trying to liberate themselves and their communities. Again, along with the election, It felt like this surface level between the reality and the facade is getting thinner and thinner.

Let’s start from the beginning with Strange Times People band. How did you form?

In my personal concept, the forming of Strange Times People Band is really connected to the True Vine record shop. Jen Kirby [STPB’s drummer] became one of my best friends soon after I moved to Baltimore. I started picking shifts up for her at the record shop. Before working at True Vine, I was mainly a drummer, and I was choreographing dance. [I became a singer] just by the pure volume of music that moves through there.

There’s a poster of Betty Davis there, and two weeks into working there, I told her, ‘I just want to listen to something that’s really raw and funky.’ She asked me if I’d listened to Betty Davis, and I told her ‘No!’ She put her music, on and my mind was blown. I bought all of her records nonstop for a month. I decided, ‘Oh my God, I want to make a band where I’m singing and I can just be crazy!’ That’s how I became obsessed with Betty Davis.

So how did the other bandmates factor in?

The question then became, ‘Who can I start a band with who would allow me to feel free enough to go where I need to go?’ Obviously, I should start a band with Dan Breen! I texted Dan that day. It started with Dan and I. I would have a microphone and a vocal processor. We would have these sessions that were so weird. Our first recordings are buried, but it’s some of the most amazing, weird shit I think I’ve ever heard.

The rest of the band came together haphazardly. Dan and I were still doing this really weird ritual for a month or two. I guess Dan was in True Vine and told Jen [Kirby, drums] that he and I were making super funky jams and Jen said, ‘You guys are in a band? I wanna be in the band!’ The funny part is is that Dan and I are both drummers, but neither of us played the drums, so Dan asked Jen to drum. So, she showed up one day and she’d literally never played drums in her life. Turns out she was awesome. Elementally and energetically, she was perfect. Dan and I were up in space going off on all these directions, and she was very grounding.

The new album sounds much more defined than your debut, Practice People. What was the process of STPB’s musical growth?

It happened really organically. I think my music-making process is very extremely intuitive. There are a lot of decisions made, but I feel like I’m the midwife of the sound. So the decisions I made were based on what was already coming through with the music. We started playing more and performing more, so the spirit of what we were doing was becoming more defined. The songs started to feel like they had a threshold of potential they wanted to fulfill. I guess we all committed to bringing them here. Not to say other songs [on the first record] didn’t have potential, but they had a different agenda.

Your lyrics are very strange and evocative. Were they freestyled, or did you write them?

Those lyrics are pretty special to me. They are sourced from different places. Some of them come from songs I had written previously. Some of the songs were channeled by improvising, some of them were written, because I write poetry all the time. It’s a mix. I guess the common thread is that all the songs come from this “seed” and from playing the songs, they just blossom.

Why have you announced that this album will be the last album?

There are a lot of logistical difficulties. I’ve been traveling for the last year and a half. I don’t see myself settling down in Baltimore again. The music we make and our process together, we really went through something as a band. Our relationships are really deep making that music together, it was definitely a spiritual experience. I think as I was traveling, it felt important for me to keep that going because it was strong and meaningful, but once we put out the album and I became more clear in my own path, it felt better to close it for the time being.

For all of us, I think it was a very powerful project and I felt like I needed to define whether I was going to make music with Strange Times People Band or in if I’m going to be focusing that creative energy elsewhere. It doesn’t mean we’ll never make music again.