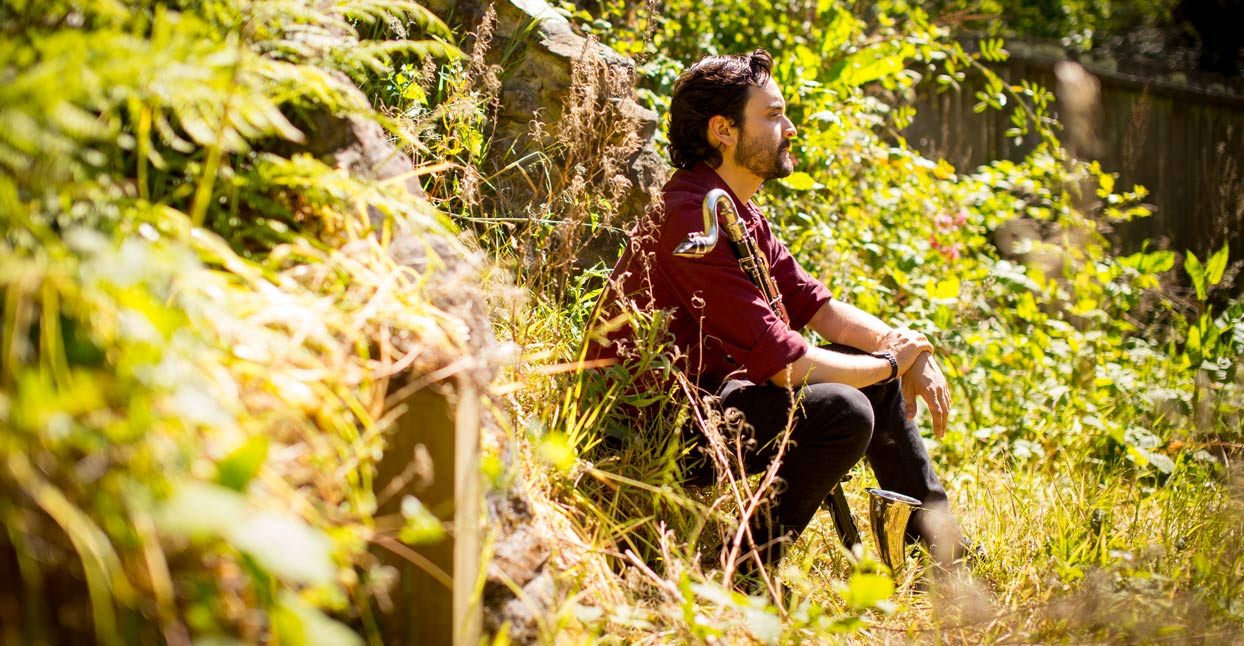 “Ultimately, this is my sonic attempt to get closer to realizing the sound I’ve been imagining in my head since I began.”

Steven Lugerner is back home in the Bay Area, taking time out of his hectic schedule to talk about his new album An Eight Out of Nine. The album is wildly lyrical, embracing the heady juxtaposition of a simply-stated melody that gradually reveals a complex system of deviations. It also incorporates an array of recording and editing techniques. That Lugerner is able to harness these capacities with such aplomb is no shock—there have been hints of this ambition throughout his career. An Eight Out Of Nine is simply the culmination of all of his work to date, coming together in the same breath.

Lugerner’s musical journey began at New York’s New School, with studies that resulted in a bold double-recording debut, Narratives and These Are the Words. Though each recording has a personality distinct one from the other, they both reflect the extent of Lugerner’s lyrical talents: Narratives is a lesson on how a succinct melodic statement can lead to lyrical adventurism. As each piece develops, their melodies behave less as a line between starting and end points, and more as the true north on a compass, providing grounding for music that wanders in all directions. “I thought it was a great representation of the work I had done up to that point,” Lugerner says, “and the process really helped me realize my identity as a composer.”

That experience paid dividends on his next project, the Gravitations series. “The concept behind Gravitations is I’m interested only in capturing the first 30 seconds of what [the musician] plays on their instrument,” Lugerner says of his unconventional duet series. “Every musician has a tactile relationship with their instrument, and has these things they naturally play initially before they start warming up—just kind of noodling around and getting the tips of their fingers flowing with blood before they sit down and practice or work on a composition. I think it’s a subconscious thing for everybody, but these things become thematic threads throughout our musical life.”

What was a mindless exercise for others became a source of intrigue for Lugerner. Those first intimate moments between an artist and instrument took on new forms when Lugerner played the recordings back and began improvising along with them. After that came overdubs, editing, and a touch of studio manipulation to bring the two separate parts into a state of unity.

The Gravitations series afforded Lugerner the opportunity to collaborate with musicians like Angelo Spagnolo, Patricia Brennan, and Fred Hersch. It also allowed him to improve his studio editing techniques—skills that would prove useful on An Eight Out Of Nine.

Looking back on those times, Lugerner says, “I had a lot of realizations about what I wanted to be doing musically, and I felt the need to get back to my creative process. I wanted to do something radically different with the recording technique, and I really wanted to do it up and have the full experience of a large ensemble record.”

Lugerner rebranded his original dectet as the “SLUGish Ensemble,” a play on his last name and a bit of a sly joke given the ensemble’s high-energy delivery. The SLUGish Ensemble made their debut at the 2015 Stanford Jazz Festival, and the elements clicked immediately. “That was the first time we played together,” Lugerner says. “The music really came to life.”

A collaboration with drummer Allison Miller at that festival gave Lugerner an idea. “That performance with Allison helped me realize the potential of the repertoire and the direction I wanted to go in,” he says. “I’m a huge fan of Allison’s contribution to Todd [Sickafoose’s] Tiny Resistors, and I had met and played with Todd a handful of times while he lived in Berkeley. It seemed natural to get both of them onboard. I was also interested in working with Todd as a producer and engineer during post-production.”

Sickafoose and Miller both play on An Eight Out of Nine—the former on acoustic bass and the latter on drums—and their influence on Lugerner is clear. An Eight Out Of Nine has a proclivity for both immersive lyrical passages and quirky flight patterns not unlike the twin masterpieces of Sickafoose’s 2008 release Tiny Resistors and Miller’s 2016 Otis Was a Polar Bear.  In much the same way, SLUGish Ensemble blur the lines between pop, chamber, R&B, jazz improvisation, and minimalism.

This album sits at the meeting point between logic and irony. Where previously Lugerner sought to bring rock, pop, and minimalist qualities to jazz performances, with An Eight Out Of Nine, he has thrown the car in reverse, expanding rock tunes into jazz arrangements. “The history of jazz players using other people’s compositions as a vehicle for their own improvisation has always been inspiring to me,” he says, “everything from Miles Davis’s version of ‘My Man’s Gone Down’ on Porgy & Bess to Dave Douglas’s take on Bjork’s ‘Unison.’ This is essentially an album of covers, or reimaginings—reorchestrations. All of these artists are incredible songwriters, and their repertoire falls far outside jazz.”

Be that as it may, An Eight Out of Nine doesn’t even remotely resemble a “covers album.” Lugerner’s use of low-end instruments to strike a soulful tone into the spritely melody of Wye Oak’s “The Tower” simply tills the soil for vibraphonist Mark Clifford and pianist Carmen Staaf to lay harmonic crosscurrents over top of it. The Velvet Teen’s original version of “Red, Like Roses” is bleak and foreboding, and Lugerner seemed to take that as a challenge. SLUGish Ensemble open with a somber tone similar to the original, but by employing a deft use of harmonic surges and a light touch on the melody, Lugerner coaxes the song to blossom into a languid ballad with enough optimism to balance out the sadness.

Allison Miller’s rhythmic dialog on My Brightest Diamond’s “Looking at the Sun” has the chatty affability of a pop song, but adds weighty, intricate phrasing to give the song a magnetic pull. That song’s charm is the perfect illustration of how rock and jazz need not be in conflict.

Nor, too, does the way Lugerner plants the title track (the sole Lugerner composition on the recording) dead center of modern jazz territory, yet infuses it with qualities that make it seem right at home with the reorchestrations of pop songs.

“I come from a classical background,” Lugerner explains, “so a lot of my early memories of music and feeling really amazing were moments when I was in youth orchestra rehearsals and you had the brass, woodwinds, strings, and percussion, so I’ve always been interested in replicating that in a jazz setting.”

Lugerner furthers that goal by bringing onboard cellist Crystal Pascucci, guitarist Justin Rock, and the wind instrumentalists Danny Lubin-Laden, Max Miller-Loran, and Daniel Rotem. “This band allows me to capture that sound I’ve been hearing in my head all these years,” he says. “I feel like everyone found something in the music they could relate to, and their voices shine in these moments.”

At this point, there’s no sense in guessing how Lugerner’s next project will sound. This has much to do with his proclivity to mix things up on a creative whim, but also a function of the musician’s own perspective on the shape of his creative development.

“In some ways, if you look at the trajectory of what I’ve put out, it seems like there’s some stark left turns,” he says. “I guess, in some ways, there are. But I don’t necessarily think of my career as being a straight-line trajectory. I think of it as a web of music and projects.”