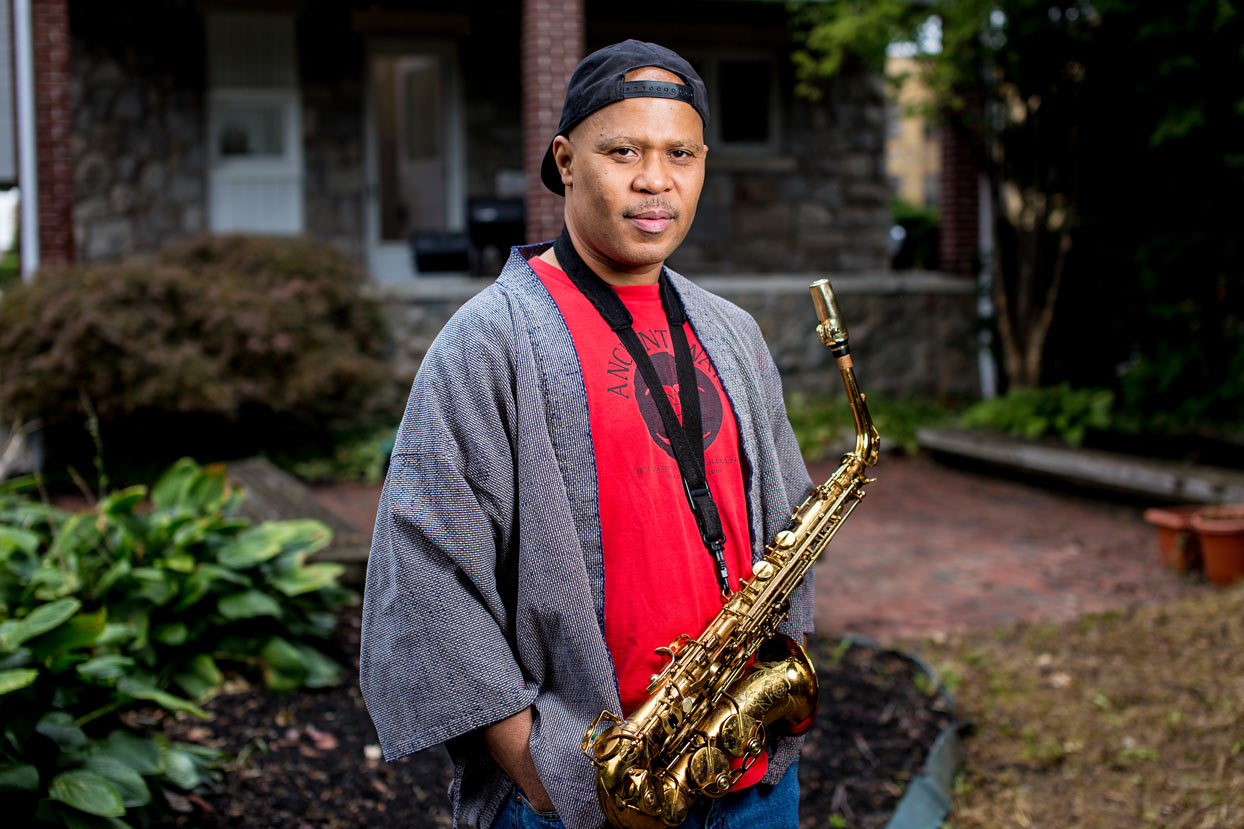 If Barack Obama spoke in paragraphs, as was often said, then Steve Coleman speaks in philosophical treatises—long ones. “My middle name is Tangent,” the alto-saxophonist and MacArthur fellow said at one point in our conversation (which, here, has been heavily edited from more than an hour of dialogue). But it’s only because Coleman is full of ideas. His body of music, which now spans over 30 years, is elaborate, layered, and draws on a deep reservoir of influences, from human biology to Asian mysticism.

Even by his own standards, Coleman’s new album, Morphogenesis, is incredibly dense. It combines jazz improvisation (including members of his primary improvising ensemble) with written arrangements for chamber musicians, including violin and clarinet. We spoke to Coleman about his creative processes, the tension between readers and improvisers, and the role of the audience in developing music.

Oh, wow, that was a long time ago! I’ve gotten a few things since then. The same year that I got the MacArthur [in 2014], I got the Guggenheim Fellowship. That same year I also got the Doris Duke Impact Award, and the year after that the Doris Duke Artist Award. But musically, you still gotta do what you do. That’s what Sonny Rollins told me when I won the MacArthur: ‘Steve, congratulations, but that award doesn’t mean shit. No award has ever been given that played a piece of music.’

Speaking of a piece of music, Morphogenesis is a very ambitious project—and considering your music, I don’t say that lightly.

That was a year-and-a-half in the making. I started thinking about that not long after we did Synovial Joints [Coleman’s 2015 recording with The Council of Balance]. But it took a lot of work to get going. It took a lot of research, then a lot of writing. And then I had to find which people would be best to do it. And that involved playing with people and cultivating a relationship with them. So I did several gigs with people; this group worked several times before we recorded. I always write for the people that are playing. I wouldn’t write for one bass player the way I would write for another. If people have different things they’re doing with the music, then I can take advantage of that as a composer.

Can you walk me through that process in more detail?

There are several stages. I get ideas—usually some kind of vision—about what I want to communicate. All my projects are connected, so one thing comes out of the last. It’s not like I’m jumping from thing to thing, it’s not like that. For me, my entire career is one long project, but I know I have to present it to people as separate projects. Things happen, you learn, you grow older, you meet different people, you’re influenced by different things, and things are added. So it’s a layering, as opposed to just jumping into something else.

I have some long-term people that I work with, like Jonathan Finlayson and people like that, but the interest of the music demanded that I use some people and not use certain other people. There was a lot of writing, and a lot of difficult reading, so I couldn’t use people who didn’t read that well.

And then, because of the nature of the thing, there’s no electric instruments, there’s only acoustic instruments—and there’s no drums. Although I originally thought about having drums, I couldn’t find a drummer that I wanted, so I went with no drums. So that changes how I’m gonna write, because now the propulsion, the momentum, of the music has to come from somewhere else. It doesn’t really come from the drums. So that determines who you’re gonna use and that changes things.

The piano’s particularly prominent on this record, it seems to me.

Well, I mean, I usually don’t use piano. So that may be it. I’ve been using guitar, Miles Okazaki on guitar, or no chordal instrument at all. And also, piano’s gonna stand out when there’s no trap drums, because now the rhythm section is just the bass and piano, and they’re the ones driving the propulsion. So on a song like ‘Inside Game,’ it’s the bass and the piano that form the rhythm section since there’s no percussion on that particular tune. They’re the engine, so to speak.

Your group Five Elements doesn’t use arrangements, per se. But when you have a project like this, and you’re relying on the musicians as readers, not necessarily improvisers, are there arrangements being used?

You also mentioned research as a step in the process. What went into the research for this project?

Well, I mean, how much do you know about boxing?

I couldn’t write a book about it, but I’m fairly conversant.

Well, the thing that links all these projects is motion. On Synovial Joints, I was musically excavating, symbolizing the movements of the various joints of the body. Boxing is movement also. There’s certain kinds of defensive moves, and different kinds of techniques, that I was looking at from a musical perspective.

The research involves making connections between whatever I’m trying to express, and how I’m gonna make musical motion express that. I think music is a language, and with a language you’re talking about something. You’re discussing something, symbolizing it. There’s a lot of basic, universal material we’re working with, and from there I move to, ‘How are we going to use this symbolically? How is this gonna fit together with this or that?’

Research also involves looking at whatever has been done in the past—the distant past; I’m not usually looking at Archie Shepp and stuff like that, I’m looking at stuff that happened hundreds or even thousands of years before. If I hear that there’s some guy from the 13th century who mapped musical notes to affections and feelings or whatever, I can’t copy that person because there’s no recordings of what that person did. So I’m forced to provide the details myself. It forces me to be creative. That’s one of the reasons I like researching ancient times; you’re forced to be creative in a way that is not just copying what Keith Jarrett did on his last record.

So on the one hand, what matters is how it sounds to you, and that it means something to you. But you’re also putting this music out there! It obviously matters to you on some level that people relate to it or connect with it.

There are several levels. First, there’s how I feel about the music. On another level, the musicians do have to be able to relate to it somehow. When they put in their input, they then become part of the composition. When you hear a performance, you’re hearing the leader of the group setting up a general environment, through which everybody is spontaneously composing.

When people put on the record, most of the time they don’t know where the improvisation stops and the written part starts. Even friends of mine listen and tell me, ‘Was that improvised or was that written?’ Now if musicians don’t know, you know regular people don’t know!

The audience is the last level. Usually, when I’m going to record something, I like to try the music out in front of actual people before we go into the studio. See what worked and what didn’t work, so when we get to the studio we had that under our belts.

Now, I can’t know what they’re actually feeling and what they’re seeing specifically. Everyone in that room—let’s say we play at the Stone, and there’s 80 people there—is thinking something different. You have no idea what people are into, what they’ve heard, and you have all these different people mixed in the room, influencing each other.

So what I’ve learned—this is a long way of answering your question—is not to worry about if I’m doing this or that too much. Because if you get into that, then you start making bad music. And I just simply express myself as best I can, and the chips fall where they fall.