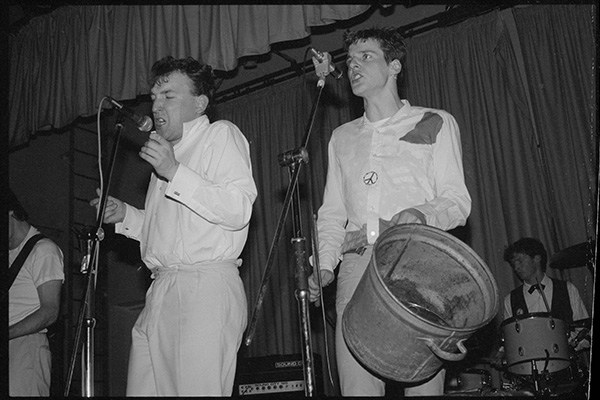 “I didn’t play the game. Although time has passed and, certainly in the context of this AOTN release, I have reflected on this and many other past events, I have an absolute certainty that this was the right decision and I still stand by it.” — Dave Carson

When punk’s furious power hour subsided in the late 1970s, a new wave of iconoclasts emerged intoxicated with the possibilities of the DIY ethos and determined to make a racket all their own. This era has been dubbed “post-punk,” and it was heady and reached well beyond punk’s aggressive minimalism. Appropriating elements of funk, electronic, reggae, and experimental music, post-punk cultivated a singular aesthetic that spawned wildly diverse artists, such as The Cure, Public Image Limited, Devo, and Gang Of Four.

One of the lost innovators of this time was Edinburgh, Scotland’s Boots For Dancing, a collective as fiercely dedicated to funk as to its anti-commercial ideals. The band issued three now highly collectible singles, sessioned with the legendary English producer/influencer John Peel, and blazed the stage, opening for the Talking Heads and U2. But the group never issued a full-length until now. Thirty-three years later, Boots For Dancing issues the album that could have made them a defining voice in the fertile time of punk’s aftermath. The Undisco Kidds (Athens Of The North, aka AOTN) was recorded back in 1982.

“I didn’t play the game,” founding member/vocalist Dave Carson says. “Although time has passed and, certainly in the context of this AOTN release, I have reflected on this and many other past events, I have an absolute certainty that this was the right decision and I still stand by it.”

Boots For Dancing was a quartet active from 1979-1982, with a fluid membership. Besides mainstay vocalist Dave Carson, the group’s other notable member was guitarist Jo Callis. Callis, who previously played in the esteemed Edinburgh hooky punk band The Rezillos, would go on to achieve success after his tenure in Boots For Dancing as a member of the electronic new wave sensation The Human League (yes, that Human League: “Don’t You Want Me”, “Human”, “(Keep Feeling) Fascination,” etc.).

Boots was inspired by James Brown, Chic, the tribalism of the Cramps, and intrepid groove explorations of post-punk progenitors such as the Slits, The Pop Group, and Gang Of Four. The group joined the ranks of the post-punk vanguard upon releasing its 1980s Pop Aural 12” Boots For Dancing EP, featuring “Boots for Dancing”, “Parachute,” and “Guitars & Girl Trouble.” The group received a thumbs up from John Peel—a huge accolade for any up-and-coming band in the punk/post-punk era—and would go onto receive airplay from Peel and record for his legendary live session series, “Peel sessions.” (Notable bands who have also recorded for this series include The Cure, Joy Division, and The Smiths, among many others.) The group was an incendiary live act, and once opened for the Talking Heads during its Remain In Light period, when the band expanded its lineup to include P-Funker Bernie Worrell, King Crimson guitarist Adrian Belew, and soul star vocalist Nona Hendryx (ex-) Labelle. At one point, Boots For Dancing was to be featured on the cover of the NME.

“To be honest, I personally felt that every time we played it was miraculous; it was always ‘of the moment,’” recalls Carson. “I enjoyed every minute of performing live, making it a collective experience, breaking down the barriers between performers and audience. Our mission was to school punks into funkateers, from ‘1-2-3-4’ to ‘on the one.’”

Dave Carson was, and still is, a voracious music lover and began the group shortly after landing a day job at a fledgling record store chain called Virgin Records. The store’s eclectic stock got him hip to artists such as Steely Dan, Miles Davis, Fela Kuti, Al Green, James Brown, and Lee “Scratch” Perry. “The Ramones’ first album opened the doors of possibility,” Carson says. “The mantra was ‘do it for yourselves,’ just get out there and give it a bash – in reality everyone was a star although it was more like everyone was an anti-star.” In an almost mythic turn of events, one day a buddy showed Carson a list of band names which included Boots For Dancing, and that very same night Carson and three of his chums pitched in as last-minute support for a featured band. The first name that came into his head when he had to introduce the band was Boots For Dancing.

Inspired from that onstage jolt, the group began rehearsing in earnest, churning out The Troggs-style (“Wild Thing”) primitive garage rock. The group’s song “Boots For Dancing” was an early standout anchored down by a New Orleans second line pulse. Upon hearing this unique pairing of punky snarl with a rarefied groove, Bob Last of Pop Aural called Carson and suggested the group make a disco 12” single of the track. “That sort of shaped the direction we would travel along: punky but funky,” Carson reveals.

Newly determined to groove, the band began to hone their chops into a taut but limber punk-funk unit. “I used to make cassette mixtapes for anyone interested in contributing to playing in the band. The triptych was: James Brown’s ‘I Can’t Stand Myself (When You Touch Me),’ Can’s ‘Mushroom,’ and Richard Hell and the Voidoids’ Blank Generation,” Carson explains.

Intuitively, Boots For Dancing found its own authentic connection between funk and punk. “It was about being subversive, playing a danceable rhythm that would subliminally get folks moving whether they liked you or not. The funkiness was the vehicle to get the message across,” Carson says. Former guitarist Jo Callis adds: “I remember [former Boots For Dancing] guitarist Mike Barclay once saying that, although we were all fans of The New York Dolls, Iggy Pop, Bowie, and glam, we were still soul boys at heart.”

Boots For Dancing would issue two more singles following its groundbreaking debut before calling it a day. “We weren’t striving to cop a deal so we weren’t hungry for career opportunities; in fact, it was the opposite. My theory was that the music business was ‘honest capitalism,’ ’cause you knew from day one that you were going to get ripped off and exploited,” Carson says. He also cites how Edinburgh was marginalized by the press and how it did itself a disservice by sticking with the old guard of musicians and not nurturing the emerging youth culture.

The allure of pop stardom also created dissonance within the group. There was outside pressure on Carson to either go solo, or be positioned as the star member of the band. This all came to a head with the NME cover opportunity the band opted out of after doing the photo shoot. “I refused to be complicit with turfing out my friends from the group and consequently all the promotional opportunities that were planned didn’t happen, including that front cover feature,” Carson says.

“Dave often worried that he was being put under pressure to adopt some kind of a ‘pop star’ image, which didn’t sit too comfortably with him. In reality, he could have achieved that more or less on his own terms rather than being molded into something he wasn’t happy with,” Callis says. “A few years later, the first time I saw Holly Johnson performing with Frankie Goes To Hollywood, I thought, ‘That could have been Dave.’ He could pull something like that off so effortlessly, a pop star on his own terms.”

AOTN label owner Euan Fryer was 6 years old during Boots For Dancing’s career apex. He’s credited as the researcher and producer of The Undisco Kidds. He and Carson first met at a record store, and quickly bonded over their expansive tastes, which include everything from techno to folk. Once Fryer found out Carson was in a band, he tracked down Boots For Dancing singles and was enamored with the group’s aesthetic.

“Originally Euan had asked if I wanted to do a DJ spot with him about three years ago, and asked me to write a couple of sentences about myself to post on his Facebook page. In the post, I mentioned Boots For Dancing and my role in the band and punk funk as a sub-genre. The next time I saw him, he had purchased our third single on eBay and wanted to reissue our music,” Carson says. “I’m still waiting for my DJ gig!” It would take three years for Fryer to chase down the masters and locate album cover photos. The journey even included rescuing tapes from a cupboard in Spain.

The album title, The Undisco Kidds, is a tribute to George Clinton and his 1976 Funkadelic album Tales From Kidd Funkadelic. The 14-track album contains previously issued tracks “Oh’ Bop Sh Bam” and “Shadows on Stone,” along with 12 never-released tracks that have been relegated to obscurity and the imaginations of those select few who witnessed Boots For Dancing live.

The music is a collection of militant, lean, and angular funk frothing over with punk energy, a dash of free-jazz, and splashes of disco pop bliss. Tracks like “Salt in the Ocean” and the aforementioned “Oh’ Bop Sh Bam” are jittery, groove-laden sonic blasts, evocative of skronky, post-punk, pioneers-gone-contemporaries Gang Of Four. When the band slows down, lays back, and digs in, it achieves singularity. “Wild Jazz Summers,” and the tension-and-release dynamic of “Money (Is Thin On The Ground)” showcase the band paving its own path, away from the tightly wound-up funk-punk of the day. The “King” Sunny Adé-esque “Bend an Elbow, Lend an Ear,” is a revelation in world beat punk fusion. Throughout The Undisco Kidds, Dave Carson’s vocals invoke new wave crooning, tribal chants, fractured no-wave exclamations, and swaggering funk proclamations. His impressionistic, lyric tales straddle the line between realistic imagery and fantastical musings.

Post Boots, Carson went to college for community development and now has a career in the field of addiction and harm reduction. He reflects on his legacy saying: “We did something back then with no eye on the future, especially considering that we’d be releasing material 30+ years later in a very different context. I’ve joked a few times with Euan that I feel like some old blues cat sitting on my porch, and then Euan comes along like Alan Lomax and gives the music another shot late in life. I’m immensely proud that this album is finally seeing the light of day.”