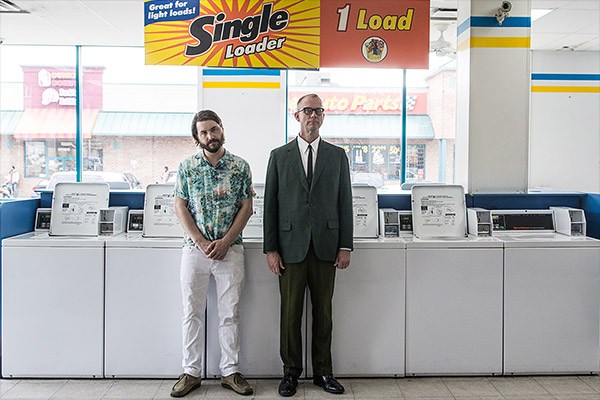 “What difference does it make whether it’s purely washing machine? This obsession with purity always leads you to hell.”—Martin Schmidt

For over two decades, Matmos have pushed found-sound composition to playful and inventive heights. They have recorded an album full of the noises from plastic surgery procedures, and another that mixes anachronistic Civil War instruments with electronica; they also once utilized a cow uterus as a percussion instrument. To make what was perhaps their most audacious project, 2013’s The Marriage of True Minds, partners Drew Daniel and Martin Schmidt attempted to telepathically send their ideas for the album to friends locked away in an isolation chamber. They recorded their friends’ reactions, and incorporated them into what became a colossal and consuming piece of work. Daniel and Schmidt take turns devising the concept behind each Matmos album; Marriage was Daniel’s brainchild, and for their next project, Schmidt decided to take things to what seemed to be their extreme opposite. “My deep resentment for the incredibly baroque, overly complicated concept of The Marriage of True Minds,” he deadpans, “I reacted to with the bludgeoning simplicity of the washing machine. That’s the whole concept.”

But while the parameters are strict—making an entire album using sounds generated by their home Ultimate Care II washing machine—the process of creating it was anything but simple. Little of Ultimate Care II actually sounds like it came out of a sudsy, spinning machine. Much of it was crafted laboriously on a computer, which radically morphed samples of running water and hands stomping on the machine into a luxurious range of bleeps and blurps, chimes and sonic squiggles. For being such a whimsical undertaking, the process of creating Ultimate Care II required an inordinate amount of work.

The album “flows in and out of washing machine-y-ness,” Daniel told me. Even though Ultimate Care II plays as a single track, it is full of peaks and valleys, “units,” that are essentially standalone tracks. “If you’re hitting high-end, sharp [sounds] for more than seven minutes or so,” he explains, “[listeners] kind of check out. We wanted something with flow so that you’d want to stick around for 38 minutes and wouldn’t burn out.” The album begins with the telltale crank of the dial and the sound of water flowing into the machine before launching into a full-on jungle of explosive percussion. At several points (2:00 and 5:45), we hear what sounds like an elephant being tortured; it is, in fact, Schmidt licking his finger and sliding it across the washing machine’s frame. At another point (6:00), deep bass tones permeate the recording, sourced from the hum of the machine’s motor and dropped several octaves. “I like a lot of trap,” Daniel says. “We used to live [adjacent to] this liquor store where a lot of bass Jeeps would pull up. I wanted part of the record to have that feeling of nodding your head to a slower tempo.”

Just as those bass notes begin to take on a soothing effect, however, the album leaps into its next passage, performing a full 180-degree turn in favor of an arrhythmic swamp whose rich textures bubble up unexpectedly. The twinkle of coins (9:30), for example, is actually a chopped-up microsecond of washing machine noise, and what sounds like a DJ scratching on a turntable (6:22), came out of a laborious procedure of editing and re-editing. On a frigid morning in Baltimore earlier this month, Daniel pulled up a sample on his laptop and looped it, chopping and twisting its sonic texture until it seemed to vibrate, moving “like a hummingbird’s wings,” as he put it. “It could be yogurt getting stirred, or someone vomiting, or marriage being proposed,” he says eagerly, “and I could slice it that small,” making it virtually unidentifiable.

The rest of the album builds tension by alternating between these two distinct styles, the percussive and the goopy (not including the four minutes (27:05) of untouched, virgin washing machine sound), before culminating in a “recap” of the album’s themes. When asked about the biggest challenge of the process, Schmidt and Daniel quickly point toward the use of transducers, which Schmidt and Daniel often used to transition between passages. A transducer, Schmidt explains, is a driver, a vibrator. “Which relates to teledildonics,” he adds calmly. “You press that object against any object and the other object becomes a speaker. It’s making things reverberate.” Schmidt and Daniel used transducers to play their recordings back into the resonant chamber of the washing machine to exciting effect: “It sounds more washing machine-y than ever.” You can’t ever really tell when exactly they are using the transducers—it’s enough to know that somewhere buried in the mix is a moment in which two musicians used their washing machine as a speaker system.

Ultimate Care II leaves us with a question: if you can make any thing sound like another, does it really matter where it came from? “We’ve pushed [the strictness of the concept] and we’ve betrayed it too,” Daniel acknowledges. But Schmidt seems less concerned with the abstract nature of the final product. “What difference does it make whether it’s purely washing machine,” he argues. “This obsession with purity always leads you to hell.” On the wacky and wonderful Ultimate Care II, Matmos show us that sometimes a sound is of secondary importance to what you can do with it. The thrill, and the adventure, is in the process of imagining what it can become.