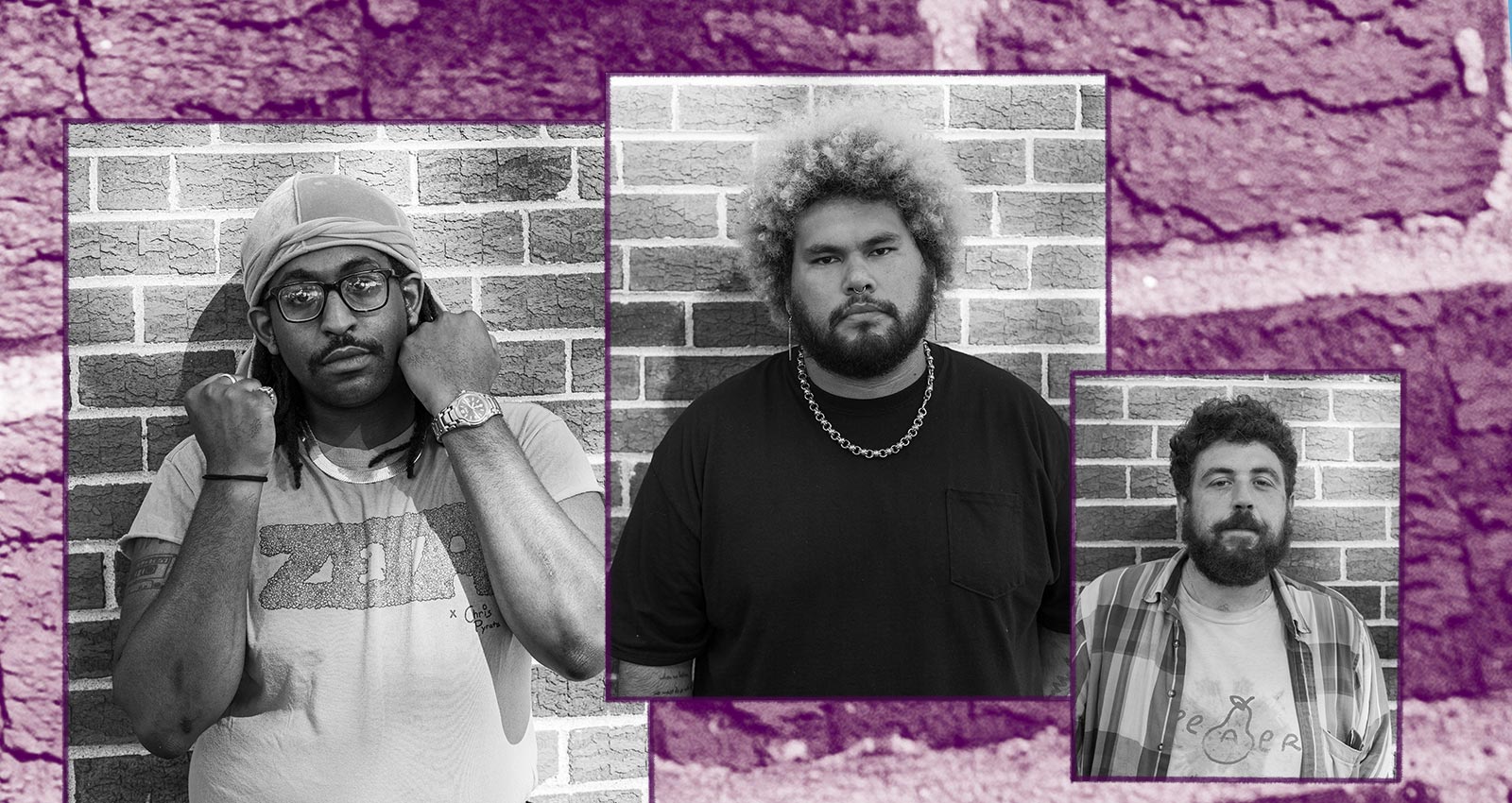 Since forming in 2014, Blackness has been at the forefront of Philly hardcore band Soul Glo’s work. While vocalist Pierce Jordan’s lyrics illustrate the ever-present pain of being Black in a world fueled by anti-Blackness, the titles of Soul Glo projects like THE N— IN ME IS ME as well as DIS N— Vol 1 and 2 allude to another part of the Soul Glo story. Given the fact that an overwhelming majority of the analysis of popular music centers white people’s thoughts, feelings, and perspectives, it would be easy to interpret Soul Glo’s use of n— (both with and without the hard “r”) as a device to make white people uncomfortable or another example of punk’s established history as a confrontational art form. But what if the band’s use of n— was in service of a higher purpose than making white folks squirm? What if Soul Glo uses n— li ewe all do: as Black folks from around the world talking to ourselves in the spirit of familiarity, community, as well as shared histories and experiences?

Speaking via zoom with Pierce, GG Guera, and TJ Stevenson, we asked why they decided to title their latest album Diaspora Problems. Jordan explains that the phrase was randomly attributed to the band on the event page of a show that they had been booked for.

“You know how they just give those little descriptions on the Facebook page? The promoter gave the description in their own words of what each artist was like and for us, they just said: Philadelphia, diaspora problems. And I was like, ‘What does that mean?’ But also like, that’s apt.”

Once they decided to use the phrase as the title of their first album for the legendary punk label Epitaph, they were armed with a conceptual framework for the new collection of songs they’d been building. The term diaspora, like the reclaimed and re-contextualized “n—,” has long been employed by Black folks around the world as a means of reasserting the sense of connection and shared peoplehood that the trans-Atlantic slave trade and racism sought to destroy. Malcolm X addressed this common struggle in a speech delivered in 1965 at the Corn Hill Methodist Church in Rochester, New York, speaking to the interconnected nature of Black struggle everywhere:

“The problems of the Black man here in this country today have ceased to be a problem of just the American Negro or an American problem. It has become a problem that is so complex, and has so many implications in it, that you have to study it in its entire world, in the world context or in its international context, to really see it as it actually is. Otherwise you can’t even follow the local issue, unless you know what part it plays in the entire international context.”

Speaking about Diaspora Problems and its underlying concept, Pierce Jordan explains that the album’s songs were written as a means of drawing a connection between the personal struggles of Black folks everywhere and the broader systems of oppression around us. “To me, it just describes the band and what we talk about in our songs. I feel like it’s also a really easy description of what 75% of the band’s lives meant…everything that we go through, every issue that we have is a result of us being descended from these scattered peoples, even the most mundane things. It all ties into what makes our lives, what they are. I feel like Black people specifically will be like, ‘Yeah, I have these same familial issues. I have these same issues with myself and I see how these problems relate to my life and how it’s a part of this larger global historical context.’”

Diaspora Problems comes out the gate swinging with “Gold Chain Punk (whogonbeatmyass?),” a whirlwind anthem in which Jordan employs a rapid-fire flow to make a forceful statement of self-actualization as the band whips itself into an electrifying fury. The song walks us through Jordan’s vision of a cruel world that forces Black folks into a prison of limited options while capitalist industries grind us into dust:

“My parents were contorted to build a future/
Where their children get extorted/
And, of course, we can’t bear to tell them their efforts were consumed in fire/
The true consumption is that of the rich and I don’t mean on no trendy left shit/
The tradition of their habit is all the fine print is/
You think you understand ownership?”

In keeping with the album’s collaborative origins, as well as its underlying themes of connection and familiarity, Soul Glo recruited a host of guests to get on the mic and contribute vocals to the album. DJ/Producer BEARCAT lends a spoken interlude to the fierce anthem “The Thangs I Carry,” Kathryn Edwards and Zula Wildheart guest on “John J,” while lojii and Mckinley Dixon show up and share mic duties on “Spiritual Level Of Gang Shit.”

“Everybody we had as a guest on the record, except for Mother Maryrose, were people we knew personally already.” Jordan says. “I kind of already had in my mind and in my feelings that nobody really was gonna want to listen to me scream for 40 minutes straight. So I was already like maybe it might be a little bit more interesting if we get some other voices on here. So then I just started thinking about people who we were already personally acquainted with, but also not necessarily involved in punk and hardcore. Obviously there are some people on there who are, but it was more just about how certain elements of the record wouldn’t sound as natural for me to be doing something as it would for some of these other people who immediately jump into my mind, like lojii, who I’ve been friends for a minute and we just like knew from around the way.”

“Spiritual Level Of Gang Shit” closes the album out with a fury. Over a head-nodding groove, Dixon perfectly articulates the relentless fight for identity and survival that Black folks everywhere are engaged in.

“Crucifix a n— locked to the beam/
Street lights got a staple for every year they’ve seen/
Me and my n—s use its power to (carry out) our schemes/
So I guess that’s why I’m used to suns warmth on me/
But the rays grew wings on my back/
And I look to the ground/
My peoples feathers ain’t tact.”

Diaspora Problems is a record that is not weighed down by the trauma of this world’s racist history, nor is it a work of art that shrinks in the face of the evils we face in the present day. Instead, Soul Glo makes resistance music, a vibrant, ecstatic, resistance in the form of sound. And by inviting the other children of the diaspora in to get on the mic and speak their truths, the revolution becomes interconnected, widespread as it is irresistible.