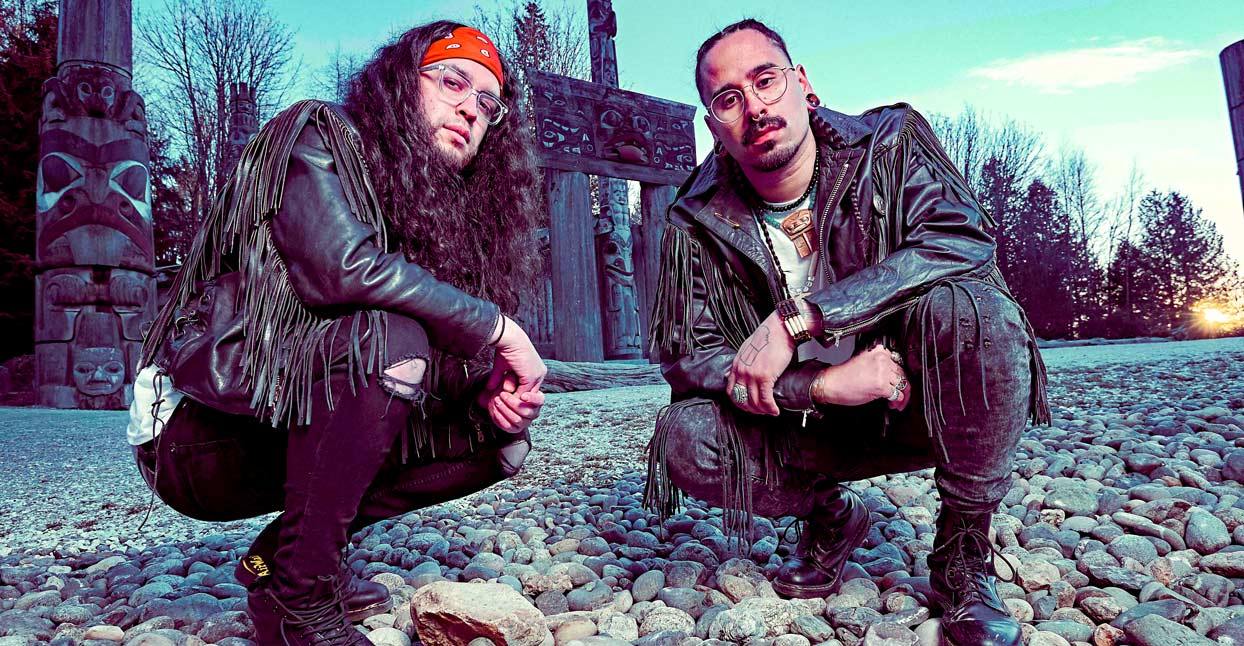 Trapline, the new record from the Haisla Nation hip-hop duo Snotty Nose Rez Kids, begins with the sound of crackling fire and a voice speaking over a haunting synth patch: “The culture of the Haisla is built on respect. Respect for the land, the air, the water, the animals, and each other. The wa’wais is a track of land; today it’s known as a trapline. That wa’wais is owned by a clan member. The wa’wais boundaries are from sea to the mountaintops. The wa’wais will be protected for future generations. We own only the responsibility to protect the land, the sea, and the air, and all that live within it, for future generations.”

The voice belongs to the mother of Quinton “Yung Trybez” Nyce. Nyce, along with Darren “Young D” Metz, are the members of Snotty Nose Rez Kids, who hail from the British Columbia North Coast region of Canada, where the Haisla people live. Opening track “Wa’wais” establishes the record’s literal and spiritual frameworks: the importance of preserving the wa’wais, or trapline, is the guiding idea and principle, while the campfire audio and Nyce’s mother’s voice suggest a storytelling tradition rooted in matriarchal power, which couches the narrative arc of Trapline. “We wanted to make it like we’re telling a story around a fire, late at night,” says Metz. Nyce says it reminds him of the fires used to extract grease from oolichan fish, a traditional Haisla dietary staple. “Hearing that fire burning just made me feel like I was home,” he says.

Trapline is, like previous Snotty Nose Rez Kids productions, an uncompromising work. Nyce and Metz, riding the runaway success of their 2017 release The Average Savage, build worlds. Their music, structured on long, thunderous, Atlanta-style trap grooves, is humorous, cutting, incisive, and incredibly fun. “We’re finding our lane within a culture that isn’t ours,” Nyce says. Metz likens hip-hop to Haisla culture: “In hip-hop, we have an MC. In our culture, we have our storytellers. Hip-hop, you have a DJ. We have our drummers. Hip-hop, you have graffiti artists. We have our carvers. They have the b-boys, we have our pow wow dancers. It all goes hand-in-hand.”

Nyce and Metz explain that they’ve been working on Trapline for nearly two years. It was initially set to be released under a different title, but recent events in the lands now known as the Canadian province British Columbia prompted a change in direction—specifically, a proposed pipeline project would barge through First Nations across the province, including Haisla territory in Kitamaat. In January, Canadian police forced their way onto Wet’suwet’en land at the Gidimt’en checkpoint, destroying and preventing access to some of their traplines. Nyce explains that there are 54 traplines in Haisla territory: “Those traplines, those are what our people used to live off of and those are what our people used to protect. We didn’t have the right to those lands, we had the right to protect those lands.” The cover art for Trapline shows a clan member responsible for protecting one such trapline.

“We have a divide in our community right now between pro-pipeline and anti-pipeline people,” continues Nyce. He says the record is “a reminder to our people that the lands that we come from come with responsibilities that are passed down from our ancestors, to preserve these territories for future generations.”

Trapline is an 18-track manifestation of this commitment, Nyce and Metz trampling colonial structures with pride, resistance, and solidarity. “Son Of A Matriarch,” which features dynamite Toronto rap collective The Sorority, hypes inclusive, decolonized feminism and fires off at the patriarchy, while “Creator Made An Animal” finds Chilliwack rapper Boslen opening with a blistering verse before Metz takes over, memorializing his baba’o, which means grandfather in Haisla. A host of other guests, including Kimmortal, Tanya Tagaq, Brevner, and Cartel Madras, fill out the record. “It’s a reminder to people across Turtle Island, and more specifically to our people of color brothers and sisters, that we come from the same struggles, and we’re gonna come out of it alright if we unify,” Nyce says. “We’re all trying to heal.”

Metz pays tribute to his mama’o, or grandmother, with two skits in the middle of the record. Both are spoken by his mama’o, who helped author a Haisla dictionary; one is in Haisla, and one is in English. “Your baba’o would’ve been so proud of you now,” she starts. “I know he would’ve been sitting here so proud of you for all you’ve done, and you’ve still got a long ways to go.” Metz explains that capturing her voice on the record was important. “It was a big hit to lose my baba’o,” he says. “To hear my gran speak on him, it really hit home, because we never really had that talk until we recorded that.

“I wish I could’ve done that with my baba, but it is what it is. We made sure to get the people that we loved most on this one, and let ‘em know just how much we love ‘em.”