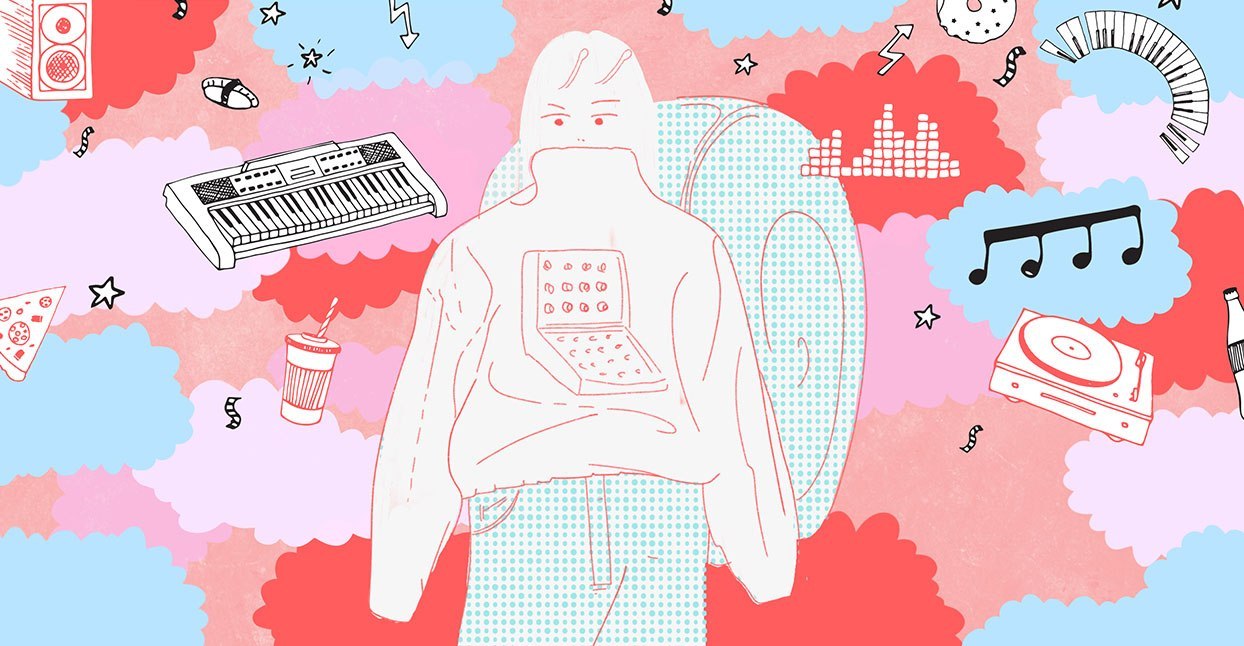 Keitaro Ujiie catches up with me a couple of hours before he has to go to a club in the backstreets of Shibuya for a late-night DJ set. The 22-year-old artist behind electronic projects such as the whimsical Snail’s House and the more uptempo Ujico stresses this isn’t his preferred evening activity.

“I just sleep,” Ujiie admits with a laugh. “I sleep so much. My parents once thought I was dying or something. Once, I slept, like, 22 hours straight.”

It’s a surprising revelation, given his prolific output as Snail’s House so far in 2019. In January, Ujiie released Alien Pop II, a four-song set of Technicolor dance-pop cuts powered by zooming synthesizer melodies and topped off by digitally manipulated vocals, singing in a made-up language. Ujiie draws equally from funk, French touch, and J-pop, with the end result sounding apt for filling a dancefloor—well after the last train has departed, that is.

“That’s a different part of my brain. If I’m inspired by dance music, I’m more inspired by sound design. Not the experience or anything,” he says. “The groove…the bass sound.”

Alien Pop II and the mellower Snail’s House follow-up scenery show just how far Ujiie has come since the start of the decade. Early recordings were simple and relaxing, but over time, the music became more sophisticated and varied. Elements of jazz and classical creeped in, and Snail’s House’s generally sunny mood (and anime artwork) helped turn Ujiie into a prominent “kawaii” artist in Japan, with one of the strongest Internet-centric followings going. And he’s only getting better, as evidenced by this year’s twin full-lengths.

“I haven’t met anyone as passionate about composition and sound design than Ujico,” Tokyo-based electronic artist Moe Shop says of his peer. “He has a wide range of taste in music which drives his creativity anywhere he wants, from the more upbeat tracks in Alien Pop, to darker singles like ‘Ayakashi.’ I think he simply loves music and the creative process, and it shines through his works like no other artists.”

Ujiie was surrounded by music growing up. “My dad had so many CDs and records,” he remembers. “He probably had more than 10,000… well, maybe 5,000, to be safe.” He absorbed all of it, which helped shape his own music. Classical composers like Frédéric Chopin shared space with Sly & The Family Stone; Ujiie says one of his biggest influences ended up being jazz guitarist Joe Pass. “I’ve been listening to him since I was zero. Like, before I was even a one-year-old. My mom played it before I slept. It was almost like a lullaby.” Many of his favorite childhood memories center around songs he heard while dozing off.

But it was encountering something a bit livelier that helped inspire Ujiie to make his own songs. He encountered Hiromi Uehara’s “Return Of The Kung-Fu World Champion,” which found the Japanese jazz artist rocking a Nord Lead 2.

“Until then, I hadn’t heard anything very acid-y in music, so I was surprised to hear her doing that in jazz,” he says. “That acid sound, that bass sound. That weird kind of stabby sound, that kind of stuff. I was kind of surprised.” Given his father’s immense collection of physical media, Ujiie never had any need to buy music—that is, until he snapped up Uehara’s 2012 album Move.

Uehara’s music pushed Ujiie to explore the catalogs of Japanese fusion acts such as T-Square and Casiopea (all, naturally, lurking in his dad’s collection), and more importantly got motivated to create his own tunes. His earliest releases as Snail’s House leaned heavily on his classical exposure to Chopin, Erik Satie, and Maurice Ravel. “I listened to their stuff, and would ear-copy everything. That’s how I kind of studied my own music theories,” he says. It also helped him capture a feeling he associates with his childhood, a melancholy vibe that has connected many of his albums—perhaps the main reason so many people describe his sound as “nostalgic.”

“When I see images, my song pops up in my head,” he says, noting that specific images and the scenery around him help spark music. He’s made albums devoted to small details found in daily life and seasons, among others. This year, though, has marked a slight departure from that approach. Late February’s scenery resembles the melodic charmers of previous Snail’s House creations, but came together in very different circumstances.

“I was the type of person who sits in my basement all day. Making music all day, kind of person. Since I’ve gotten a girlfriend, I’ve started going out of my house more and explored a lot of things,” Ujiie says laughing. The songs on scenery reflect his joy of simply wandering around the city, whether skipping down familiar paths on “Itsumo No Michi” (translated: “The Usual Path”) or marching somewhere new on “détour.” There’s more to it than just taking new routes, though.

“I was very sick at the time. Things like that—nature and stuff—kind of healed me,” Ujiie says. In mid-2018, he suddenly developed reflux esophagitis, which caused severe pain and hives. The scenery track “Medicine” alludes to this, and yet, its slowly unfolding melody and muffled vocals are so soothing it never feels like an ode to pain.

Scenery gives new wrinkles to Ujiie’s style, but is still very much a Snail’s House record. That’s not the case with Alien Pop II, the sequel to a 2017 offering of the same name. “So I’m not very good at writing lyrics. I wanted to make something very pop music with lyrics on it, but I couldn’t write them,” he says. Instead, he more or less invented an extraterrestrial language using vocal effects (“I can’t say what, that’s my secret,” he says). The first album leans towards electro-pop, particularly inspired by J-pop group Perfume, a trio known for busy songs featuring filtered vocals. For the sequel, Ujiie wanted more funk.

“I was interested in the indie kind of French electro, [like] Justice,” he says. His knowledge of French dance music was pretty slim, but he happened to be friends with Parisian producer Rhodz, who introduced him to many artists that also influenced Alien Pop II. After three months of working on it, he released the brief set. The bubbliness of the initial installment remains, but is now joined by slinkier rhythms and a slightly more aggro energy. It’s bloghouse rendered through CrunchyRoll.

Ujiie isn’t slowing down. He says he’s already working on multiple other albums, several tied to upcoming seasons. “I’m always working on separate albums at the same time. I do about three at the same time now,” he says. It’s a lot to juggle, to say the least. At least he’ll be well-rested.