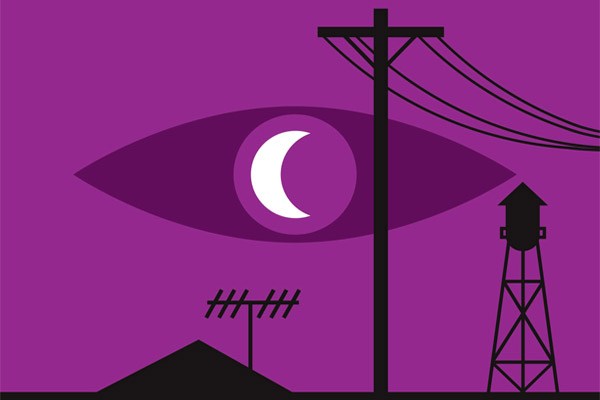 “We certainly see real life in Night Vale. Night Vale is scary and weird, just like real life.”
A menacing, glowing cloud drops dead animals from the sky. Then it becomes president of the school board. A five-headed dragon—primarily alternating between a Southern gentleman and a human-hating egomaniac, though there are three other heads to contend with—is running for mayor. His opponent? A faceless specter that lives in your house.

Night Vale is an imaginary city that feels palpably real, created in the minds of writers Jeffrey Cranor and Joseph Fink and released to the world in a weekly podcast that loosely resembles a community radio show. Since 2012, it has joined the pantheon of richly-sketched fictional towns, from Superman’s Smallville and Batman’s Gotham, to the Amazons’ Themiscyra and King Arthur’s Camelot. But Night Vale is actually quite quaint. Supernatural occurrences are everyday matters, treated blithely by its citizens and the show’s announcer Cecil, voiced by actor Cecil Baldwin. It is a testament to the success of the show’s creators—and to the talents of Baldwin—that they have cast a city that feels at once utterly strange and utterly normal.

The popularity of the show has led its creators to take it on the road, and this week they are recording their third live show—the previous two have been double-length episodes, packed with guest stars and a tight story arc. In “Condos,” released last September, mysterious new homes arrive in town, and Cecil struggles to articulate his feelings to his scientist boyfriend. In “The Debate,” that faceless old woman (voiced by Mara Wilson) and the five-headed Hiram McDaniels square off—with interjections from angels, as well as reports of growing concerns over time-traveling deer.

“We hope they get a good story, which is to say an entertaining story, which is also to say a challenging story,” Cranor said. “We craft stories that are interesting to us. The success of the show came from us writing things we personally found interesting or funny or moving or difficult, and that’s what we want to continue to do.”

The live shows feed off the energy of their fanbase—Cecil, normally a fairly reserved character, has a new swagger to his personality. Night Vale’s fans are attentive enough that they cheer a new voice in “The Debate” after it speaks only a single word, immediately recognizing an infamous character.

Those kinds of reactions are a result of the strong continuity that Fink and Cranor have crafted through the show’s two seasons—a brief mention of a character may re-emerge as a full-blown plotline several months later. Fink wrote to me that “From the start, we agreed that the show could do anything we wanted, could go to as many weird and poetic places as we liked, as long as it had strict continuity. So anything that happened or became true in an episode, even little jokes, had to become part of the truth of the show.”

There is the mayoral election as well as the omnipresent, omniscient town council. But there’s also a strangely compelling distrust of local librarians, and the recurring House That Doesn’t Exist (which kind of explains itself). Most intriguing is Night Vale’s relationship with its terrifyingly happy sister city of Desert Hills, and StrexCorp, that city’s reigning corporate overlords. Night Vale’s canon resembles Adult Swim’s The Venture Bros.—which began as a Jonny Quest spoof and gradually transformed into an opulent fictional universe. In fact, Jackson Publick, a Venture Bros. co-creator, voices Hiram McDaniels.

The atmosphere of Night Vale is shaped by more than just Fink and Cranor’s words and Cecil’s voice. Music plays a prominent role, with distinctively moody accompaniment in the podcasts provided by Disparition, the solo project of composer Jon Bernstein.

Each episode also features the “weather”—a song handpicked by Fink and inserted into the broadcast towards the end of the show. “Music is an important part of the show because it’s something that’s important to me and that I really love. So anything I was going to be spending a great deal of time on was going to have to include music somehow,” Fink wrote. The weather has included the creators’ longtime favorite artists, fan submissions, and the results of happenstance—Fink had a chance encounter on the street with Chilean songwriter Nelson Poblete and ended up playing him on the show.

The Night Vale tours have brought in weather from local guests, too—The Mountain Goats, a fan of the podcast, played at a North Carolina show. To date, the live releases have featured Gabriel Royal and Jason Webley.

Between the music and the writing, it’s easy to become deeply obsessed with the goings-on of Night Vale. I keep vacillating between wanting to vote for Hiram McDaniels and feeling like the faceless old woman is a better candidate (not that it matters: voting is superseded by the counting of loud pulses emanating from a nearby gorge, which decides the winner). I’m genuinely concerned with the growing role of StrexCorp and the incorporation of the local government, which threatens Cecil’s broadcast freedom. It’s the best of local politics, with a very heavy dose of the uncanny.

But the prosaic format of the show is what truly creates the stable sense of a town. Radio conventions—the announcements of a community calendar, the reading of sponsored commercials—acquire their weird power from the daily strangeness of Night Vale itself.

“Given that this is an ongoing show with no end date and no TV-style season structure, and given that it is fully independent and free (no chance of getting cancelled by a dispassionate network), we have the freedom to keep exploring these characters and this universe. It’s a community radio show and there will never be a shortage of news events (just like in real life), and characters are always evolving and changing for better and worse (just like in real life).”