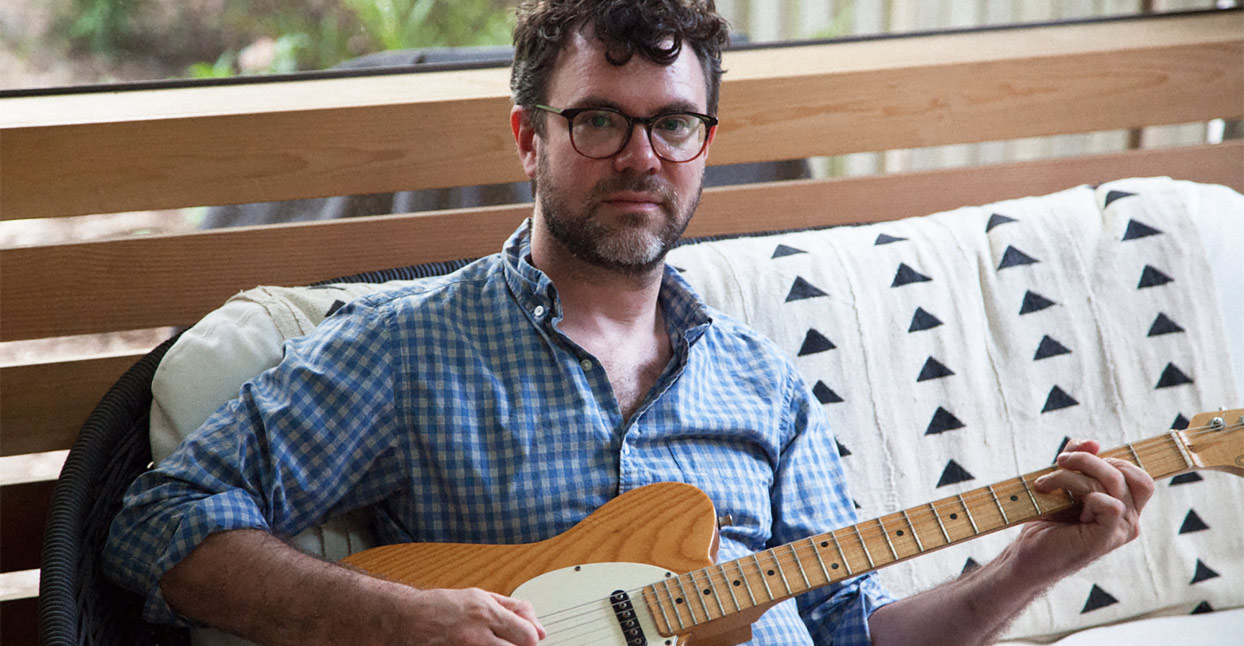 Shy Layers is the solo project of JD Walsh, a visual artist with a day job in video editing and motion graphics. (The name of the project, which also graces his eponymous debut EP, is also the name of a video editing tool.) Though he’s played in various bands over the years, a recent move—from New York to Atlanta—caused Walsh to turn his attention to his solo music. The result is a warm, winning batch of sparkling, soft-focus pop songs.

We spoke with Walsh about the relationship between visual art and music, making pop music that’s challenging, and the appeal of the vocoder.

Looking through your visual art, there seems to be a consistent interest in the idea of representation in popular culture. Do you think that same idea informs your music?

Yes and no. I think that one analogy that you could make, maybe, would be that lyrical content in music is the same thing as representational content in visual art. So, for example, if you take something that we’re all familiar with, like an image of chewing gum – a picture of something recognisable, that’s not abstract—that’s sort of the same thing as letting lyrical content into your music, because you’re referencing something real, using words that are very specific, so that people can conjure things up. Things that are more abstract—like shapes, colours, forms and patterns—I tend to see as more the instrumental things, the abstract idea of music as colour, light and that sort of thing.

The overall sound of the EPs, plus song titles like “1977,” feel a little nostalgic. Do you think that’s a fair assessment?

In some senses, yeah. I think my interests across the board, and across the history of music, tend to be older. I think that does bleed through on some of the tracks. In the case of ‘1977,’ it’s referring to that organ sound. There’s something about that watery Rhodes organ that, to me, exudes the late ’70s. It just reminds me of Paul Simon with a mustache.

Your music feels light and breezy in a way that I really enjoy. Would you mind someone describing your music as ‘easy listening’?

No! [laughs] I would be into it if someone described my music as easy listening. In the same sense that, if you listen to Astral Wakes by Van Morrison, or Alice Coltrane, these are all records that have that light, ethereal quality about them. This is all music that I like and that I think is pleasant to listen to, at least for me. So if it’s easy to listen to, I’m okay with that.

That term can sometimes be used a way of disparaging music that’s seen as lightweight, or not challenging enough.

I think that it can be both. That’s kind of what I strive for. It’s a goal of mine. Because I think that a lot of the best records have that accessibility that pop can offer but, on further listening, can be really complex. Another Green World by Brian Eno is a good example of that, where it’s just shorter pop format songs that also hint at more challenging, ambient stuff. I think that that’s a sweet spot which I strive for.

What led to the vocoder being so prominent in your music? I feel like it injects a sense of fun into the songs.

There were a few different reasons. I mean, the fun thing is definitely part of it. And, as far as my own real voice: It’s okay, it gets the job done, but ultimately, it’s not my strong suit. And also, I think it’s a referential thing: if I were just to leave my voice as is, it would just sound like another indie-rock kind of thing. I think one thing the vocoder does is blur the genre a little bit. Because when most people think of vocoder, especially younger people, they probably think of Daft Punk or something like that. But I really wanted to reference Kraftwerk or Parliament, or old funk and soul records.

And it sort of anonymizes it a little bit, adds an element of mystery or veiling. In terms of gender or age, it’s good to keep that as an anonymous thing.