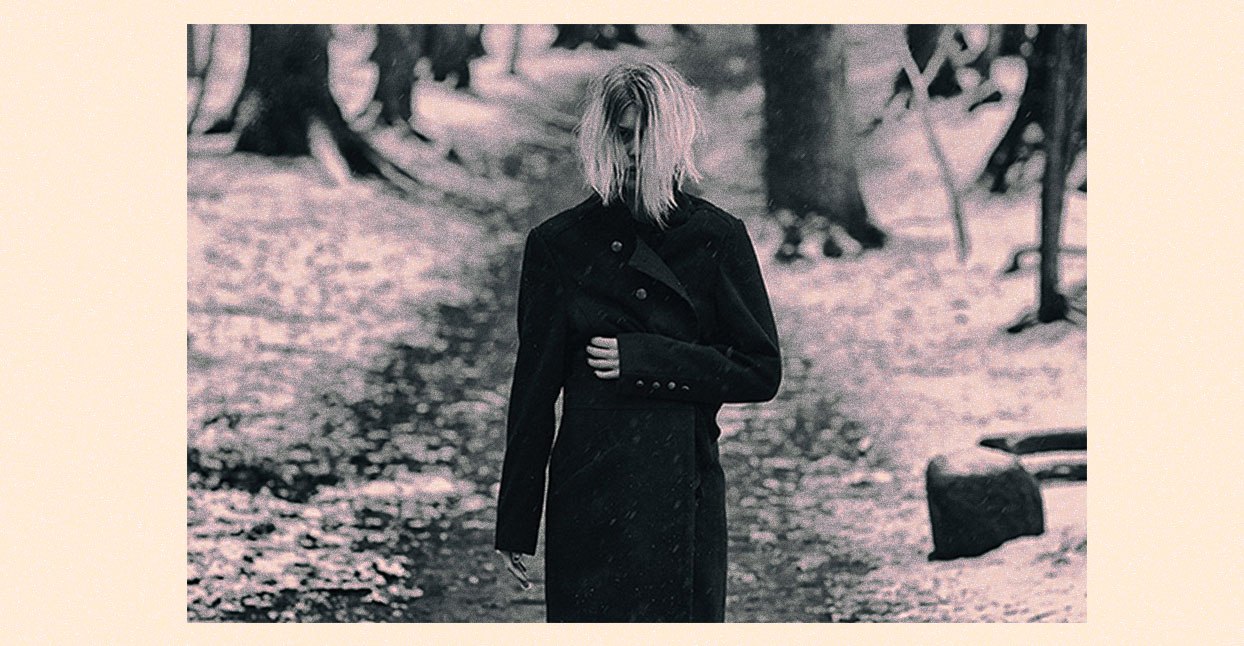 Wyatt Marshall is a writer in New York City.

“I never planned on playing this music for anyone, let alone releasing it. So it was not without complications for me to unleash this project into the world.”

Press materials state Myrkur is a Danish, one-woman, black metal band from the “darkness of Scandinavia,” and her debut, self-titled EP “burst onto the scene like a Valkyrie into battle.” The second single, “Latvian Fergurö,” followed a similar script to “Nattens Barn” and added fuel to the fire. The whole self-titled album, now available, is a compelling ride—raw like black metal of yore, yet stylish, confident and mature.

Captivating mystery surrounds the release of Myrkur’s debut. Could Relapse, the influential American metal label that signed her, really have snagged this artist after hearing her sing in a forest? It is a sad testament to the insular nature of the genre that there aren’t many women in black metal—let alone one-woman bands. People began to wonder how such an act could fly by all radars, skip the demo phase, and leap onto a high-profile stage.

Almost immediately, music journalists and enthusiasts began to chip away at the mystery. It turns out, Myrkur is the work of Amalie Bruun, a Danish artist and longtime black metal fan. Bruun says she writes and records all of her music in Denmark, where the history of Scandinavia and Scandinavian nature—forest, mountains, cold, and Nordic magic—inspire her. She references second-wave Norwegian black metal bands like Darkthrone and Ulver as influences, as well as Edvard Grieg, the 19th-century Norwegian composer known for his romantic works and occupier of a special place in the Norwegian collective conscience. She’s also in another band, the indie-pop duo Ex Cops, and she’s a model who has been featured in fashion publications like Refinery 29 and an ad for Chanel, directed by Martin Scorsese.

It is fascinating that an artist can compellingly coexist in such different worlds, and interesting to think how one might inform the other. Can one simultaneously be a successful indie-pop artist and a mysterious, black metal musician from the Scandinavian hinterlands? Darkthrone’s Fenriz, an elder statesman of black metal if there is one, is a professed fan of techno and house (watch this video around 1:02:20 for proof), and says a lot of his colleagues in Norway feel the same way— even Euronymous of Mayhem, before his passing, was a fan. They look at the limited purview of a strict black metal doctrine as both unnecessarily blinded and foolish.

In a statement from Relapse, label manager Reynold Jaffe said that Myrkur was signed based on the strength of her debut record and, “we are well aware that context is necessary for many people to formulate an opinion, for better or for worse.” He continued, “Myrkur is categorically controversial and challenging. She’s not someone who discovered Ulver and Burzum 18 months ago; she grew up on it and channeled her passion into a very authentic-sounding Scandinavian black metal record. It’s unfortunate for anyone to dismiss a great record simply because it came from an unusual source that contests the typical narrative.“

Nevertheless, it’s inevitable that Bruun will run into detractors. As Jaffe indicates, among the most severe are those that say Bruun might be deliberately misleading potential fans while dabbling in a genre where listeners are drawn to the music for its perceived authenticity—the Michael Moynihan book Lords of Chaos serves as a good guide to the craziness from which black metal as we know it was born. Being a dilettante is a grave charge in a genre that has traditionally followed an unwritten doctrine of obscurity and has shown resistance to change, challenging credos and outsiders who step into its world. Black metal is, however, experiencing unprecedented coolness in the wider music criticism sphere, and time will tell if sounding authentic, or the perception of being authentic, will affect the success of Myrkur.

Regardless of whether Bruun’s other work colors the way fans see Myrkur, it’s an impressive debut EP from a promising artist. Her new album, which she is currently writing, is one to look forward to—she has set the musical bar and level of intrigue very high.

Bruun declined to talk about her work outside Myrkur, but she did answer the questions below. Her responses have been edited for brevity.

Bandcamp: You’ve got a unique vocal approach on your self-titled album. Instead of rasps, you go for a multilayered chorus and the occasionally heavily distorted, caustic shriek. The result straddles more traditional black metal and haunted beauty. Why’d you choose to avoid the genre-standard shriek?
Myrkur: I would not say I avoided the standard screams. I do quite a lot of these metal/primal screams on this EP [and even more so on my upcoming full-length record that I am now writing]. Screaming is one of the rewarding parts about black metal, both to listen to and to do myself. It releases a fraction of the anger and hatred I have inside me. I have, since I was a child, listened to and sung in girls choir, therefore these choral vocals and arrangements come quite natural to me.

BC: Your music has an early ’90s second-wave quality—I agree with some other writers who have likened it to Ulver’s Bergtatt. Can you elaborate on the influence that period’s output has on your music? I’m also interested to hear about the influence of the 19th-century Norwegian composer Edvard Grieg, whom you called the “godfather of black metal.”
Myrkur: Edvard Grieg to me is the supreme being of Nordic composers. His works reflect the nature of Scandinavia itself—dark brutality, but also pure and frozen beauty. He moves within the eerie and tension-filled Nordic folk music universe that echoes so deep in my heart. Some of his music paints a picture of the conversion from our pagan Asetro to Christianity that was violently forced upon us.

Yes, Ulver and these bands of this period I have listened to and hold dear to my heart. I feel they echoed Edvard Grieg in the sense that they captured the essence of Scandinavia and Nordic history, nature, culture, and mind. As a child I was fascinated with Norse Mythology and our Aseguder. This is often an inspiration in black metal, as well. I can’t very well put words to what it does to me when I listen to this era of black metal, other than it feels like my home.

BC: In press materials and an interview with the blog Halifax Collect, you’ve said, like a lot of black metal bands, the nature and beauty of your native Denmark inspires you. Can you elaborate?
Myrkur: Only when I find myself on, for example, the top of a mountain or in a big forest, can I feel that odd silence that is not empty and makes me feel fulfilled. A lot of people have told me they feel the same way. Maybe it goes back to when I was born. The night of my birth [the northern lights were shining] and [it was] one of the coldest winters of several decades. My mother tells me I was not allowed to come outside until I was around 2 months old because the cold could kill a newborn baby. I feel at home in cold and darkness because of this. But I love Denmark all year long. We have midnight sun in the summer. The author Hans Christian Andersen poetically captures Denmark in a beautifully melancholy and dark way. My mother used to sing to me his song “Min pige er så lys som rav.” The lyrics roughly translate to “My maiden is as fair as amber and the golden wheat of Denmark. Her eyes are as blue as the sea, when the sky is down there.” I identify with this song musically and as a woman.

BC: Do you play all the instruments on the recordings?
Myrkur: I play all the guitars, some bass and the vocals. My friend from Sweden, Rex Myrnur, did all the drums. I recorded and mixed the EP in my house and a mastering engineer [did] the mastering.

BC: Any possibility Myrkur will play live?
Myrkur: Yes, I would very much like to play live concerts. I don’t have any desire to go on tour somewhere with venues that would force me to compromise my sound. I dream of setting up a show at Grieg Hallen, for example, with the Norwegian girls choir.

BC: Why’d you choose to present yourself anonymously when you first came out—was it your idea? Were you worried about how your other work might color the reception of Myrkur?
Myrkur: Yes, it was my idea. I don’t think any record label prefers an artist who doesn’t want to do any press, face-to-face interviews, band photos or portraits, and [provides] no background information or bio. But it was my requirement or I didn’t wish to release the EP at all. I never planned on playing this music for anyone, let alone releasing it. So it was not without complications for me to unleash this project into the world.

Today, some people don’t trust their own ears and their own inner beings. They need others to tell them what to like. They need to know everything about an artist to decide if they like the music. Their ears have somehow gone deaf to just taking in music by just hearing it.

If you write and release a classical music record, does it matter what color your hair is, what you did last year, what you like to eat for breakfast? This should not matter for my record and it must be up to the listener to decide if they like what they hear, instead of waiting for some kind of PR company-written bio that isn’t truthful anyway, and writers to tell them what to like. I believe people are strong and brave enough to trust their own ears and hearts.

BC: Some might say the way you presented yourself was disingenuous. Whether it’s fair, many black metal fans crave “authenticity.” What would you say to those who might not take Myrkur seriously in light of your other work and how Myrkur was unveiled?
Myrkur: I was born and raised on the northern coast of Denmark. I have written this music for years by myself in my house in Denmark. Black metal comes from my part of the world, Scandinavia, and has its roots in the Nordic nature that I hold so dear and also our ancient pagan religion of Norse Mythology and our folk music.

So I don’t know why a person coming from an entirely different part of the world with an entirely different culture would ask me if I’m really Scandinavian enough to write music that [has run] in my bloodstream from the day I was born. Luckily, most people don’t ask me these questions and they aren’t fixated on genre etiquette.

Another thing is that the black metal musicians I play with in Scandinavia all like and play different genres of music, as well. So this type of concern is only something I’ve met with recently. Luckily, most people just listen to the music and let their ears be the judge.

BC: What should fans expect from Myrkur going forward?
Myrkur: I would like to play live concerts. I am working on a full-length record that most likely will be recorded in Bergen. The rest I don’t really know. This whole time of releasing Myrkur on Relapse has been completely spontaneous and unpredictable. So it is hard to say.