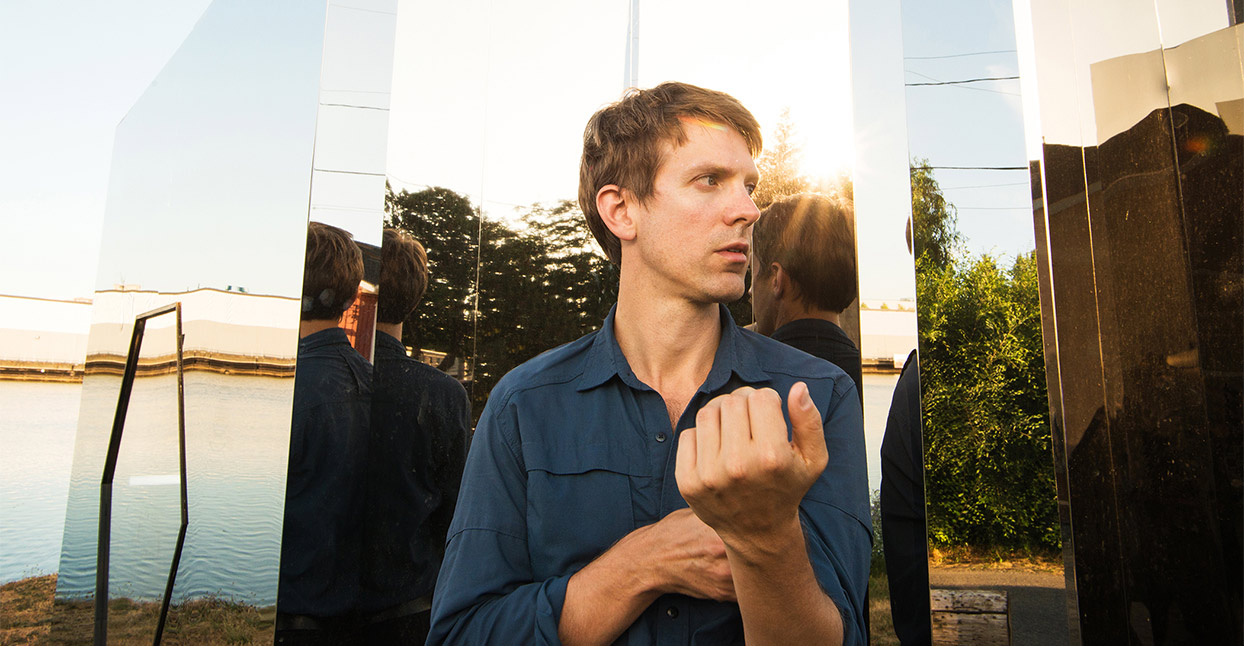 Though he’s arguably best known for his work fronting the art-rock outfit Shearwater, Jonathan Meiburg’s interests and pursuits go well beyond music. He’s a world traveler, a student of ornithology, and has penned a host of articles for publications like The Talkhouse, The Quietus and The Appendix.

When Meiburg spoke with us, he was in the middle of a residency at the Cary Institute for Global Good in Rensselaerville, New York, where he’s working on a book about the “ten species of caracara—which are these weird South American birds of prey—and the people who live with them.” As part of his research for the book, he went swimming in the Caribbean, trekked into the distant jungle of Guyana—“where people don’t ever go”—and is planning a trip to the high Andes. Enthusiastic and gracious, Meiburg can swing from discussing Chinese logging operations in South America to the indelible sonic signatures of Christian rock, and connect both topics perfectly.

Shearwater are now out on  their final leg of touring behind Jet Plane and Oxbow, their fantastic and fiery ninth LP from earlier this year. “I think [Jet Plane] is more vital now than when we released it,” says Meiburg, “and it will be personally satisfying to play those songs as loud and as hard as we can for whoever wants to come see it.” We talked with Meiburg about current events, American pathologies, and the responsibilities of artists to address the world around them.

When we first scheduled this interview, we were only a week out from the results of the U.S. election. Now, we’re two. How are you feeling about it?

Oh, rotten. It seems like every day brings a new gust of terrible news, and it just gets clearer and clearer that, for one thing, the people in [the Trump] administration don’t have any idea what they’re doing—which is maybe the most hopeful aspect of it. But on the other hand, the [resources] that they have at their disposal to fuck around with are of tremendous consequence to people all over the country and the world. So I feel angry and afraid: angry that people this dim and self-absorbed are being allowed to take control of the United States Government, angry at the American public to have been so short-sighted as to give no thought to people in other parts of the world or even to their own interests—that our election wasn’t just a WWE-style fight between two cartoon characters.

I think about my father, for instance, who has worked for the Environmental Protection Agency for the past 40 years. He’s the deputy administrator right now, and he basically has to spend the end of his 42-year career at the EPA helping a group of people who believe that climate change is a hoax, that environmentalists are silly, and are openly in the pay of the fossil fuel industry. These are the people who are taking over the agency to which he has devoted his entire life, which preserves clean air and clean water for people in the United States. It’s just so perverse. If I sound like I’m getting wound up, I’m getting there.

I saw that video you posted on Instagram right after the election, where you mentioned that [for the tour] you’ll be touring in red states. Will that concept be dominating your thinking?

I didn’t mean that in the sense of ‘Now we’re going to enemy territory,’ because that’s not really the case at all. I grew up in red states. I moved to New York five years ago, but I’d never lived outside of a red state in my whole life before that. I know from experience that those places are not homogenous. And the fact is that the people who might be excited by Trump are very far from the majority, even in those states. So I think that the tour will be—to the extent that people want it to be—a way that we can kind of be together. Not to mourn—because who wants to go to a rock show where everybody’s just crying?—but to reaffirm reality for one another.

I was trying to make another little post yesterday or the day before, because even though it seems silly to be promoting a rock tour right now, that’s what I have to do. But finding the tone for it is really hard, because it can’t just be doom, because you can do that at home. You also can’t be like, ‘Hey, rock show!’ because, what? One thing I have noticed, with music, is that this whole hedonist strain of pop music, the ‘party party party’ stuff, just feels dumber than ever. It always seemed pretty dumb to me, but now it’s like, ‘Are you fucking kidding me? That’s not what we need.’ And not need in the sense of something that’s good for you. You don’t want to make music that’s like Grape Nuts, that’s not what music is for. Music is to affirm our life together, all aspects of it. And escapism has its place, and even hedonism has its place. But as a defining philosophy, it’s just so inadequate and so unsatisfying. It’s like being served a bowl of whipped cream for dinner.

I know in the run-up to Jet Plane and Oxbow you had talked about it as being a political record. Since we’re talking about it post-election, what would you see as the role not just of music, but of political art in general in our current time?

Political art can be such a tricky thing. For Jet Plane and Oxbow, the record that inspired me in some ways was Bowie’s Scary Monsters, because he had described it as ‘social protest music.’ At first I had thought, ‘huh?,’ but I went back and listened to it and it’s kind of an oblique protest record. Protest is embedded in it musically, and it’s not all on the surface.

I don’t like slogans of any kind, they tend to reduce the world to an unrealistic and unconvincing flatness. But I think that the duty of art is to the truth, whatever the truth is, and if you see it reflected in art in any way, if it’s a difficult time politically, then you’re going to see that reflected in the art. I don’t know how much good can be done from trying to tell people what to think. That just doesn’t seem to go down very well. But, on the other hand, if you feel like there are distortions in the way that we are looking at the world, then you can try to make art that somehow corrects for those distortions. Does that make sense?

Yeah, I think so. So would you say you feel it’s your obligation to do that?

Not in a moral sense, but you’re not doing a good job if you aren’t doing that. It’s a requirement of the job. You can’t build a table that things are going to fall off of. It has to be level—that’s what makes it a table. I think art has to reflect the world as it is, and the world as it is contains a lot of abstractions and a lot of things that don’t conform to material reality, like hopes and dreams and fears and mythologies, evil and good. But it has to be grounded in a real energy in order to have depth. And there are some kinds of energy that dissipate, I suppose. So trying to make art that isn’t phony, that’s the hardest thing to do. If there’s a need for it to be political at the time, then it will be political. What’s a really good example of political art to you?

The day after the election, I was just kind of wandering around Vientiane, and there was this song that popped into my head from the new John K. Samson record, called “Postdoc Blues.” It’s sort of about trying to find how you can do good in a world that makes you feel really small and really helpless. It just felt very true to a moment where I felt very far away and very powerless and very shocked, but also knowing that I couldn’t just run away from it.

With Jet Plane and Oxbow—the last song on it is ‘Stray Lights at Clouds Hill.’ Clouds Hill was the little cottage that T.E. Lawrence, aka Lawrence of Arabia, maintained at the end of his life. He lived on a military base near it, and it was sort of his refuge. He died in a motorcycle accident on a road just next to it.

And what’s interesting about him, among many things, is that even though he indulged in one of the greatest 21st Century examples of mythmaking in the western world, this character he created of Lawrence of Arabia, his reaction to his fame was really complex—in general, he rejected it. He re-enlisted in the Air Force under a pseudonym and started over as a raw recruit, even though he was a colonel in the Army. He referred to Lawrence of Arabia as ‘a cad I’ve killed’ later on. He seemed to want to atone for something. I think he felt like he had stepped outside the bounds of what a person should do and be, and rather than trying to do a public act of contrition, it was like he went to a monastery or something. He tried to reduce his life back to its actual size. That act is, I think, the most inspiring thing that he did, even though it’s kind of the opposite of what made him famous. I think people need to be told that you can climb down. You don’t have to keep working up to a fever pitch of nationalism. I think there’s a growing sense that the requirement on your life is to stake out positions and then die defending them. And while that might be true in some cases, as a guiding principle for life, it’s just really destructive—it just makes people fight one another over things that don’t matter that much.

What I was trying to do with Jet Plane and Oxbow was to explore certain pathologies that aren’t just American ones, but that mostly manifest in the American psyche, because that’s the one that I know, at least somewhat.

And post-election, how much do you think you understand it?

Well, certainly now it conforms more to my fears than it did to my hopes. It’s easy to think that this political moment might be the most significant of my life—and not in a good way—and I’m playing in a rock band and writing a book about birds? What good am I doing here?

All that I can do is try to make the things that I am doing somehow intersect with what’s really happening, and not [have them] just be solipsistic self-meditations on my own wonderful and pathetic self. I think the big difference between art that I like and art that I don’t like, of almost any kind, is: there’s art whose only method seems to be ‘I am,’ like ‘Look at me!’ And then there’s art that seems to say, ‘We are,’ ‘You’re included,’ ‘We’re here together,’ that sees you and embraces you. Some of my favorite music seems like it’s listening to you. My great hope in life is that someday I can make art that does that. I think with every album, with everything I write, I get a little bit closer, and before I check out I’d like to have done it in some satisfying way. For me, and for other people.