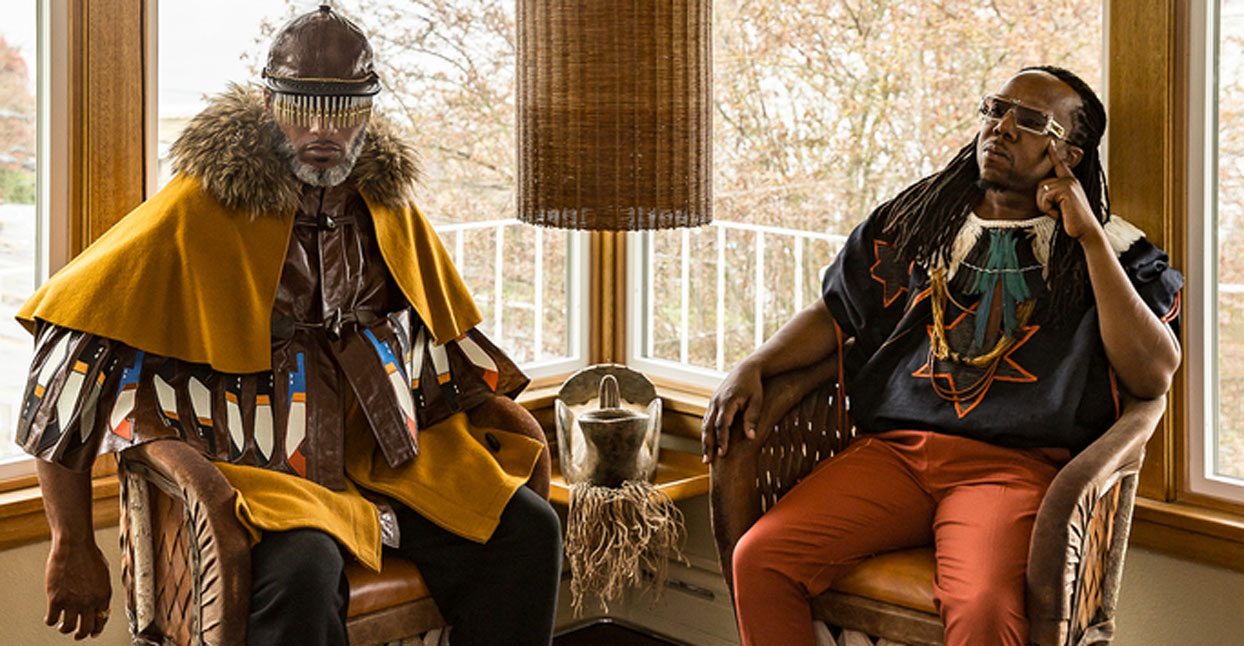 For more than two decades, MC and producer Ishmael Butler has built a diverse and challenging body of work, exploring the nuances and potentialities of Black American music. In the early ‘90s, he helped infuse hip-hop with deep jazz sensibilities and Marxist philosophy as a member of the Grammy-winning rap trio Digable Planets. He spent part of the 2000s diving deeply into minimalistic psychedelic funk with the band Cherrywine. And as frontman of the avant-garde hip-hop duo Shabazz Palaces, Butler’s practice of open experimentation and exploration continues. Working in Los Angeles and back at home in Seattle, the group has created two separate but complementary albums to be released together: Quazarz: Born on a Gangster Star and Quazarz vs. The Jealous Machines. Both are the products of this adventurous approach to music making. From the rolling, bass-heavy soul groove of “Shine a Light” to the minimal electronic percussion and glittering synths of “Julian’s Dream (Ode to a Bad),” both albums traverse a broad sonic territory, inviting in guests like producer Erik Blood, singer/bassist Thundercat, and The Strokes’ Julian Casablancas.

We spoke with Butler from his homebase in Seattle, where he discussed this ambitious body of work, how he blends the concrete sensibilities of hip-hop with the outermost regions of space, and why both lend to his music’s complete and cosmic whole.

It’s interesting to me when artists decide to release this much music at once. Did you originally intend to release two albums?

Nah, I finished one album and turned it in. After that, I went in the studio with my bro, Erik Blood. He had moved from Seattle to L.A. He happened to be in town for 12 days or something like that. I recorded the second album subsequent to the first one. At first, I thought I was just going to get a few songs done and have some stuff in the can to put out here and there. We ended up finishing an album; it had a sound and a feel and a completion to it. It was a further extension of the album I had already finished. At first I didn’t think I would be able to do anything with it until later. But I talked to the label and said, ‘Man, I’d like to put them out together, or at the same time or near the same time. Fortunately they were cool with it.

So, Jealous Machines was made first?

Yes, Jealous Machines was made first.

Both albums have different feelings and different tones. Jealous Machines seems to be, lyrically, a bit dark. It has more of a chip on its shoulder. Whereas Gangster seems to have a brighter, celebratory feel.

For me, narratives emerge subsequent to the work. I wasn’t smart enough to go in with a conceptual overlay and then execute like, ‘Oh, this album is going to be about ‘boom boom boom,’ and then I somehow make 10 or 12 songs that are all about that. Nah, I go in, make the music, and I know that I’m going to make it with feeling and that my instinct is going to prevail. So that being said, I know that at the end of it, there are going to be themes that have emerged, and that’s when I figure out what it’s about. Environment, political atmosphere, emotional space, the social atmosphere.

Is that typically the process for you? You just absorb everything that’s in the air, socially, and culturally, then you just let it out? How do you go from an idea or a spark into a fully fleshed-out song?

The process to me, I hold it dear, because emotionally, I’m so attached to it. Talking about it is almost like talking to you about a picture of my girlfriend with no clothes on. It’s not something that I really want to reveal to any and everybody, because it is intimate. But, I respect the question so I’ll say this: Yeah, it’s basically like, I got a studio at home that’s very capable of letting me get down my ideas, even create a finished product. In a big studio, there are a lot of things I don’t have the expertise or the acumen to be able to twist the knobs to get the sound, so I fuck with cats that can. Cats who I both dig for their engineering skills, but also for their music instincts and skills as well. So I like to make shit at home, and when I get it to the point where I want to take it to the studio and execute, then I go and rock with my brothers that have a flair for that, who can expand and expound on what I’ve already done.

I was listening to Born on a Gangster Star and picking the sound apart. I was wondering about the personnel for a record like this. How many people were involved?

On Gangster Star there’s me, [Erik] Blood, Darrius [Willrich], Thaddillac, [the other half of Shabazz Palaces] Tendai [Maraire]… probably nine or 10 cats, same as the other album.

The first single, ‘Shine On (feat. Thaddillac),’ is perfect. I’m from Philly and that Dee Dee Sharp sample is a classic Philly soul record. That’s like the sound that my parents used to slow drag and bop to.

[Laughs] Ooooooh, it’s interesting you say that because my father is from 51st & Locust [in West Philly], so I’ve got a lot of ties to Philadelphia, those songs and their production and orchestration. We think of it as just funky shit and soulful, and it is, but a lot of people don’t recognize there was so much orchestration and musicality in the arrangements. And if you’ve ever seen a video of [Dee Dee Sharp] performing [‘I Really Love You’] live, it’s beautiful, magical, and sensual.

As you mentioned earlier, it’s great to have a skeleton of an idea and be able to bring in all of these people who can elaborate on it and accentuate different things. The older I get, the more I understand that arrangement is key.

Yeah, for sure. Music should move like life moves. It should have grooves but also changes that are unexpected. It should have undertones and undercurrents, some things should happen on the surface while other things are going on under the surface. It’s a reflection of life, you kinda reveal what walking and talking is like in a song.

Speaking of which, on the song ‘Eel Dreams,’ you have all of this pretty ambience going on top of the music, but down low, the drums and the bass remind me of Too $hort’s ‘Freaky Tales.’ A lot of the music on these two records are like that, real pretty, lush stuff happening on top and these really heavy rhythms down bottom, even if they’re not in 4/4 time or whatever. Is that intentional?

I mean, it’s as intentional as when I put my clothes on or walk to the store. I need niggas to know that yeah, I got a lush side to me but [laughs] I got some hard, hood shit with me, too. And even a song like Too $hort’s ‘Freaky Tales,’ it’s hard and it’s hood, but it’s also plush and pillowy and player like a muthafucka.

I’m curious, is there any other Black music like this now? Who are your contemporaries that you listen to that inspire what you’re creating?

Of course. I really like Migos. I like their rhythmic and sonic approaches, and once you start getting into their personal style and flair, then it supercedes everything. It’s so unique and new, it’s attached to all of this historical shit but it’s still just…out of nowhere! One of my favorite songs now is ‘Blow 3’ by AR-AB and Dark Lo, I was really impressed by that. To me, the pinnacle of Black expression and music is not happening where the media is pointing.

I appreciate you saying that because I feel like a lot of older hip-hop heads have been jumping on this wave like, ‘We don’t like Migos, we hate trap music’ or whatever.

There’s this notion that millions of youth, a lot of them black, are participating in something and have agreed on this music being something…how you gonna just discount that? You just saying that en masse, they somehow have the wrong instinct or interpretation of something?

I agree. Any final thoughts?

First of all, shout out to Bandcamp because it’s a great idea and a great music platform. It’s tough for me to even talk about music today…the country is being taken over, we getting moved on. [This interview was held on the day that President Donald Trump fired FBI director James Comey—ed.] And people are still talking about it, like, ‘Hey this is strange, or can you believe it?’ You haven’t even spoken to the people. At some point, we gotta believe it and something has to be done. That’s just what I want to say, man. Stay up and stay frosty out here. Anybody that makes it to the end of this article, maaaan…keep a look out. It’s going down out here.