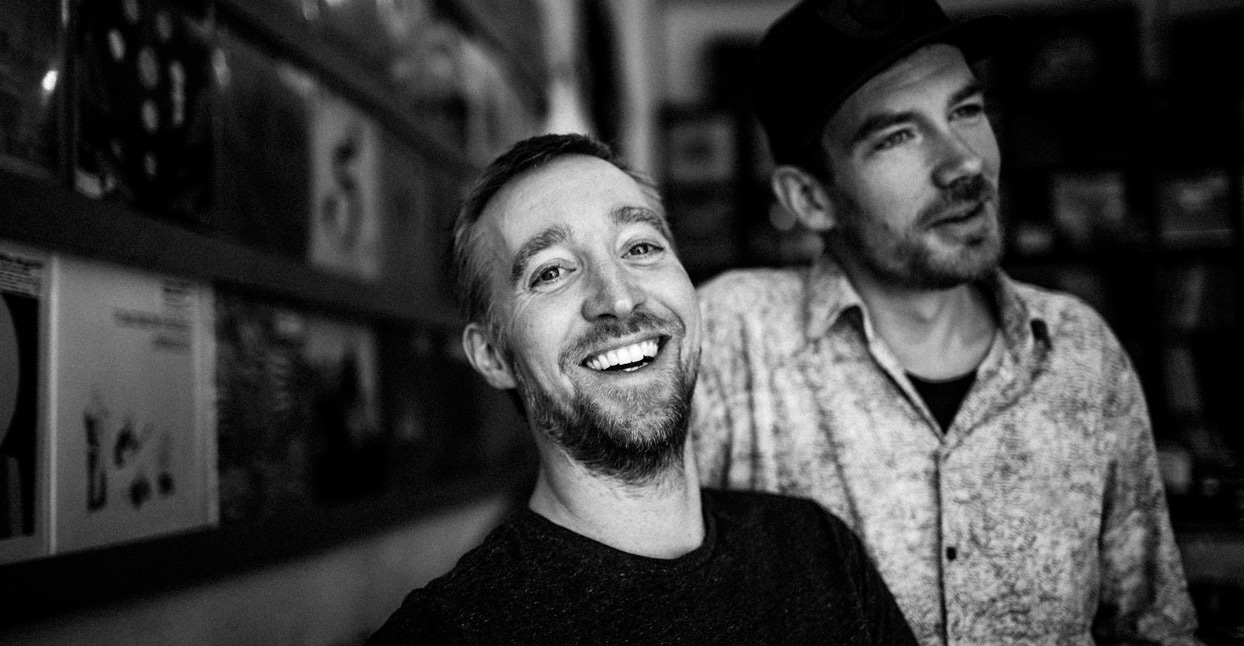 Hauke Freer and Matthias Reiling of Session Victim have had much in common since their shared teenage years searching for satisfying rave action in rural Germany. They first met in 1997, and embarked on a musical journey that moved from playing local drum & bass nights to their current, soul-filled club DJ sets; they’ve also developed a killer live show that combines bass guitar with synths and samples, while leaving plenty of room for improvisation.

Freer and Reiling have spent decades amassing a huge collection of disco, house, soul, and funk records. Some of their finds turn up in their flawless, vinyl-only DJ sets at clubs ranging from London’s mammoth Printworks to the tiniest backroom bars of Berlin; the rest are hidden in plain sight throughout their own music. In the studio, the pair build their irresistible jams on a bedrock of obscure samples, applying their own distinctive, classy take on decades of dance music.

This peerless skill has never been better utilized than on Listen To Your Heart, their third LP, which was partially recorded in San Francisco. Following previous LPs The Haunted House of House and the slightly darker See You When You Get There, Listen To Your Heart sees the pair further loosening their tight groove and affording themselves well-earned moments of breezy, coastal euphoria. This is thanks in part to fruitful collaborations with cult German composer and guitarist, Carsten “Erobique” Meyer.

Music aside, the pair have an equally enthusiastic, if not quite as obsessive relationship with pinball; the classic arcade game even shows up on the record’s distinctive sleeve art. From an Ibiza poolside, Freer and Reiling discussed the politics of pinball and their infatuation with San Francisco.

How did you get into pinball, as Session Victim?

Reiling: So Hauke lives in Berlin, I live in Hamburg near the Reeperbahn district. There are a lot of casinos out there, some of which have an arcade area. So when Hauke would come to my place to make beats, that was one of the main things that we would do to make a break from the sequencer. We’d go down to Reeperbahn and put some coins in the pinball machine.

The pinball community is a fascinating subculture. I spent an hour watching a YouTuber called Dead Flip just stream himself playing a classic machine.

Freer: What is fascinating about pinball, as a game, is that it’s both analogue and digital. So, it’s not a computer game, but it still has this physical, analogue element to it. I think this is what makes it really interesting. You’re always in front of a screen, whether you’re on Skype or making beats, but it’s also this physical thing.

I could draw a slightly cheesy line between the appeal of the game, and how you guys make music.

Freer: I agree, to an extent. When we’re in the studio, although we use analogue gear and old-school approaches, we’re not against technology, and we certainly use it for the best of both worlds. And pinball has that, too.

I wonder how far you can take ‘skill’ in pinball. I understand that ‘nudging’ the pinball table is a contentious subject. Where do you guys stand on this sensitive issue?

Freer: Just to make this clear, we’re definitely still more on the ‘consumer’ side of pinball players. I mean, you can nerd out over anything now to an extreme degree, but we definitely don’t have time for this. Maybe one day!

Maybe one day, someone from Pinball Magazine will ask, ‘Did you really used to make dance music?’

Reiling: We have to train a little more for that. It’s always been our dream to have a Session Victim pinball machine. We have the layout designed.

Freer: But coming back to nudging…

Reiling: Yeah, so the nudging, you mean pushing the table? There are certainly referees at tournaments, but all the machines—whether they come from [popular manufacturers] Stern or Williams or Bally—they all have a referee built in. So if you push the table too hard so it tilts, then the ball just falls down. On newer tables, you can even set how far you can push it. So it is accepted, and it is even kind of a technique, definitely. Even if you play a computer simulation, if you hit the spacebar, it’ll nudge the table, and three strokes will usually make it tilt.

Freer: I moved to Berlin in 2000 to work for a techno label, and I spent many later hours hanging out there and playing the pinball machine in the office, which was a gift to the label boss at the time. He was so good, he would just play one game throughout interviews with press. It had a disabled tilt, so you could nudge it really hard.

Freer: Matthias and I had hoped to invest in a pinball table with the money from the advance for this record, but the problem is that we don’t have room in the studio right now.

Reiling: We would have to kick out a synthesizer to fit it in there, and we’re not ready to commit to that right now. So we really actually do love it, but only to a certain degree.

Nonetheless, I understand you did play a lot of pinball in San Francisco, where you spent some time recording Listen To Your Heart.

Reiling: Well, on our first day there, we stumbled into pinball heaven as we know it. There’s this huge record shop called Amoeba, and then right behind it, a place called Free Gold Watch. And they have a huge collection of pinball machines, dating from the 1950s to the present day.

Freer: I’ve never seen anything like this. We were nearly crying when we saw it. On the third day, the owner asked, ‘Do you guys want to see the back room?’

Reiling: And it was even crazier in there. And we went every day. The schedule was: go to Amoeba, buy some cheap two-dollar records, get some food and a coffee, go to Free Gold Watch, spend either a little or a lot of money, then head back to the studio until we fell asleep.

That sounds like a good way to record an album, and certainly different from your typical method of spending a winter going back and forth between Berlin and Hamburg. I know you’d visited SF before, but what was it that resonated enough about the city that you felt compelled to go back?

Freer: The very first time we did a U.S. tour was during Hurricane Sandy. We arrived in New York, and there was no power. We couldn’t play our show, we couldn’t even get to our hotel. So that was a really rough start. The next stop was San Francisco, and we got there and it was as if suddenly, the sun came up. And we instantly thought the vibe was for us. New York was very grim, and then San Francisco felt so welcoming.

Reiling: We stepped out of the airport, said hello to the guy that picked us up, and we instantly said, ‘This is the place we want to be right now.’

Freer: We left after that time and said that it would be a dream place to return to and write music. And when, through so many coincidences, it was possible for this album, we then found a studio, met friends, and fell in love with the city. Like everywhere, it has its downsides, but we got the good. Even stumbling into this arcade was just a crazy coincidence, but just another thing San Francisco had to offer to us.

Reiling: It’s one of the biggest treats that we’ve ever gotten out of music, and we have such close friends there now that we always look forward to seeing.

The new album still sounds like classic Session Victim, but there is undoubtedly something grander about it, a sense of ‘California soul’ if you will. What are some of your personal favorite records from that part of the world?

Reiling: One of our very favorite records from the Bay Area has to be Endtroducing by DJ Shadow, which influenced us both a lot. There’s a record store, Groove Merchants—there are a lot of good record stores in San Francisco, and that is one of them. The first time we were there, the very first record I saw on the shelf was a record for [music] schools, featuring drummers talking about drum sampling. I put the needle on the record, and it was the very first record with the sample that Endtroducing starts with [George Marsh discussing drumming: ‘The music’s coming through me’]. Which was a crazy coincidence. That’s one that had a huge influence on us for a long time.

How did the collections you were digging through there differ to what you typically find in the cheap crates back in Germany? Better, worse, or just different?

Freer: I’m not sure if you’re aware, but in Amoeba, you can’t pre-listen to any record. So that’s why we stopped buying any record above two or three dollars there. In the course of recording an album, we usually go through three feet or so of records. So we can’t take that risk, and when we’re looking for records, we want to discover stuff, rather than hearing stuff we know. Typically, we look for maybe late ’70s stuff, but suddenly, we were forced to take a gamble on a lot of mid or late ’80s records, simply as that was the cheap stuff.

But you made it work in the end?

Freer: Sometimes, records we buy are just something to start with, instead of a blank screen. The initial idea or sample doesn’t get used in the end. And we used them more on this album so that you can’t even tell it’s a sample; it’s more organic sounding. We have just got a little bit better over the years at this. You need to be creative. You can’t just be lazy with sampling because you’re out of ideas.