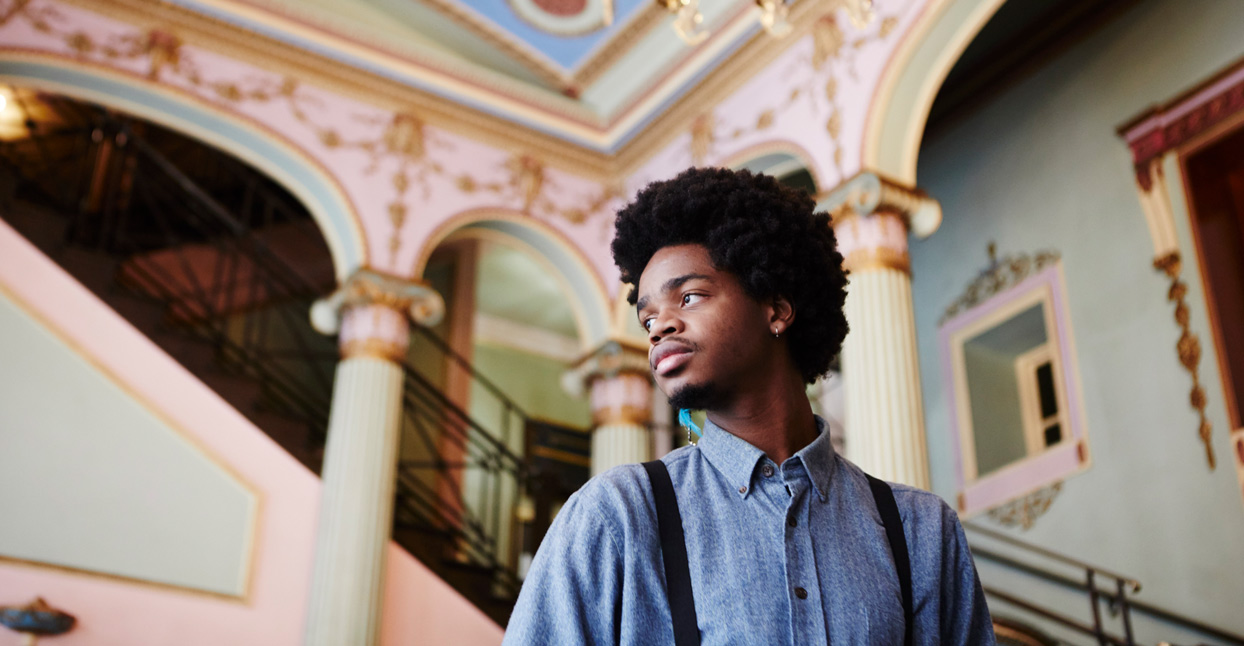 Vocalist Sequoyah Murray’s sophisticated, three-octave baritone mesmerizes from the moment he picks up the phone and says, “Hello.” It’s a voice he’s been nurturing and developing like an athlete since he was a teen. And now, the musician and producer—who’s been self-releasing much of his music since he was 15 years old, not to mention collaborated with respected avant-electronic producers James Ginzburg (Emptyset) and Dave Corney (Hyetal)—has made his first power move with his inaugural EP, Penalties of Love, newly arrived on Thrill Jockey.

None of this was in the original plan.

“I didn’t want to be a musician,” Murray says, who’s based in Atlanta. “My life was so oversaturated with music as a kid: going to my mom and dad’s gigs, falling asleep at their shows.” (His mother is a singer; his father a percussionist.) “But [music] was always filtering in through my subconscious.” He recalls being introduced to the idea of performance by his mom, stepmother, and sister, who he’d reluctantly entertain with a song now and again. But if his 11-year-old self had had his way, Murray—now 22—would be training to be a veterinarian or archeologist.

But things began to change a few years later, when a teenaged Murray found himself actually wanting to sing. The quirky, even comical voice of his youth had blossomed into a rich baritone—and from that day forward, unlocking its potential became his primary focus. Murray found himself “geeking out” on electronic music and became fascinated with “weird” vocal manipulation. He sought inspiration from artists like Grimes, Chairlift’s Caroline Polachek, and the synth outfit TR/ST, to name a few.

For Murray, an exploratory artist who regards performance, songwriting, and discovery as equally vital, forging kinship with other voices and baritones—those who practice “vocal acrobatics”—is especially important. “Milton Nascimento [the renowned Brazilian singer-songwriter and guitarist] and I have the same range, the same baritone—but he’ll do falsetto stuff,” he notes. “I could really benefit from listening to what he did throughout his career.”

Another baritone of interest: the late Arthur Russell, a musician to whom he’s often compared.

“The way I feel about [Arthur Russell] is that we just naturally came out sounding like each other. He technically would be my influence, because he lived 30 years before me, and his music has had 30 years to filter down. But I didn’t hear about him until much later, once I was already influenced [by Grimes and others] and started to draw from those.”

A year ago, Murray’s friend Jay Levy (the creator behind Morph, an ever-changing series of dance parties held in Atlanta) suggested he record at the Red Bull Music Academy. The two-week stint in Berlin exposed him to music pioneers such as Larry Gold, celebrated string arranger for the O’Jays, Jill Scott, Erykah Badu, Kanye West, and more; he heard techno pioneer Mike Banks of Underground Resistance, who would go on to mentor him, and a slew of other underground noise artists. Today, he regards the experience at the recently-defunct RBMA (as well as the many connections he made through it) as one of the “most privileged experiences” of his life.

Which brings us to Murray’s latest, Penalties of Love, an EP written between 2014 and 2017 which wrangles with romantic upheaval, loss, and longing. Like all his music, it’s a sonic space designed specifically for him. “It’s something to help me vent my emotions, something I can channel through. And something I want to listen to because I listen to my music more than any other music. I make it for me.”

Murray’s sound on Penalties is, in a word, expansive. West African and Caribbean influences commingle with touches of new wave; at one point, German musical project Enigma’s orchestral pop merges with Brazilian and Tropicália rhythms, one of several remarkable, unexpected blends found on the record. Murray’s family appear on the EP as well, both literally and figuratively: The spectacular sonic cacophony, “Second Born,” features vocals from his 11-year-old brother and drumming from his father—he regularly performs on his son’s work. And his mother not only sings backing vocals on “Penalties of Love,” but echoes of her technique and style can be heard in Murray’s own voice.

“My number one vocal inspiration is my mom. I was really learning, unwittingly, when I was young. Now, when I write songs and sing live, I do the same little riffs that she did. It’s genetic.”

Despite his many influences, Murray alone is the driving force behind his sound. He’s played the upright bass since he was a child, and he also improvises on numerous other instruments. POL finds him playing all the synthesizers, drums, piano, and even a Jamaican ginger bottle used to create a flute sound. And while Atlanta sound is currently most recognized for its trap music stars like Future and 21 Savage, Murray is excited to reveal another side of the cities sound.

“I come from the live, improvising jazz scene in Atlanta. That’s the scene my parents played in and that’s the scene I spend most time in. It’s an Atlanta sound that’s rarely heard. It’s a melting pot of all different influences and different cultures that my parents absorbed, and that I absorbed from them.”

Murray calls the EP the realization of his dreams and he hopes it resonates with listeners. “I hope they get a hunger for more. I hope it lights a fire inside of them to demand more from me.”