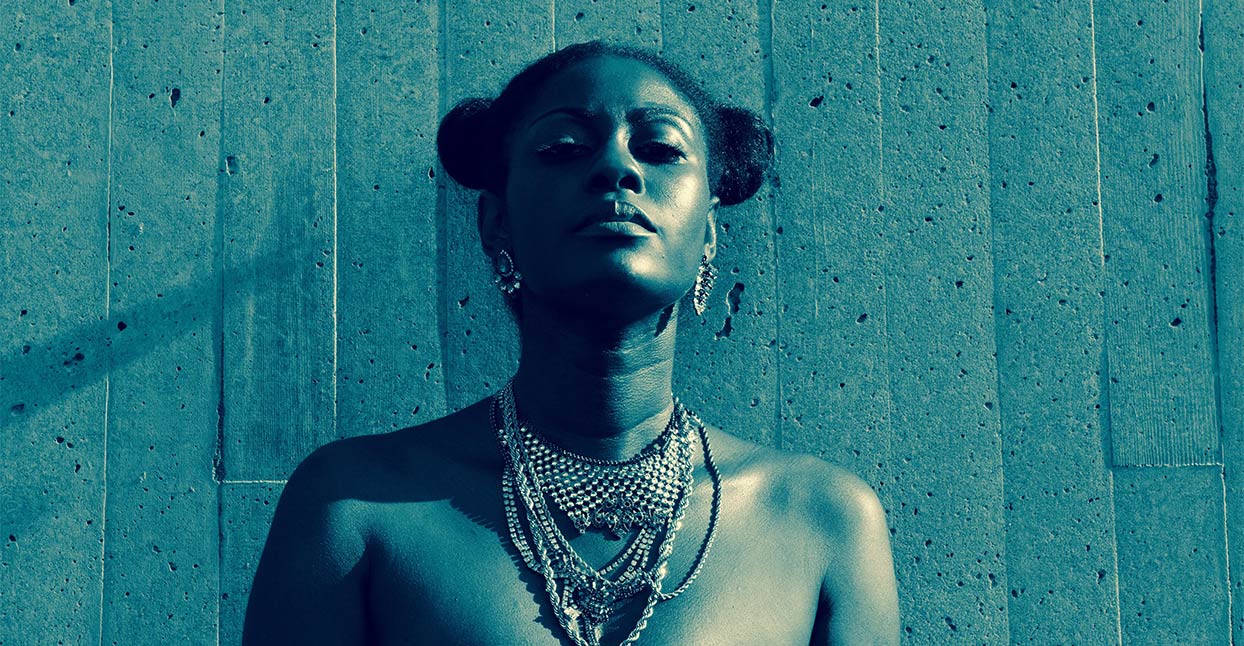 On her new album, Pieces In Space, Ithaca rapper Sammus (real name Enongo Lumumba-Kasongo) fires off songs as piercing as the bullets shot by her Metroid series namesake. She stares down sexist demons with the same intensity and deliberateness that she summons to reflect on childhood innocence. ‘Black Girl Nerd Magic’ is the name of the game, and the weapons are Sammus’ rapid-fire rapping and omnivorous production.

We spoke with Sammus about representation in nerddom, rape culture, the powers of therapy, and being the ‘Bad African Kid.’

Gamergate was the source of a lot of controversy in nerd communities. What was the inspiration for “Comments Disabled,” a track that specifically mentions Gamergate?

Women I was following on Twitter, who were sharing their experiences with harassment. The stories these women shared made me physically ill. I saw how widespread the issue is. That’s what inspired the song.

There’s a weird dynamic where people who should know what it’s like to be bullied spin it and release that vitriol at others. When I picked the name Sammus as my moniker, I was really nervous, because I recognized that geekdom’s dark side can be violent, and I was taking on the moniker of a beloved Nintendo character.

You flipped the name of the video game “Perfect Dark” to become a metaphor for race. What was it like to look back on the fantasy characters of your childhood and not see yourself reflected?

My first love wasn’t music—it was drawing. Looking back on characters I drew, none of them resembled me. I created 40+ characters and 300+ pages of story in an animated universe, but hadn’t even thought to create somebody who resembled me. That’s when I realized the power of media in shaping kids’ identities and the spaces they’re supposed to occupy.  Looking back helped me think through my issues with media representation. You don’t imagine yourself as the crew leader. The main character of my universe was a blonde-haired, blue-eyed man.

How has your perception of diversity changed as you’ve transitioned from consuming nerd culture to creating it as Sammus?

It’s meta, because the representation I craved as a kid—I’m now playing that role for folks. I perform at PAX East and receive hugs from black women who feel they haven’t had space there. I’ll hear things like, ‘Thank you! You’re helping me know this is where I fit in.’

Pieces In Space starts with politicized songs and transitions into personal ones. What motivated you to discuss your assault on “Song About Sex”?

I was receiving praise from men who liked me because I was ‘conscious,’ and I didn’t discuss sex. That annoyed, me because I have nothing against female rappers who talk about their bodies. I created this song to make those men uncomfortable. I was less interested in showing sexuality and more interested in discussing the harmful interactions I had with sex. I decided that this was the place to discuss my assault. Conversations with friends made me realize how pervasive it is. Many women are experiencing trauma in their sexual lives, so I wanted to share that as way for women to feel unashamed of their experiences.

Harassment is framed as ‘just words,’ but what begins as words ends in violence. That’s where people are coming from when they discuss rape culture. It’s not just the act. It’s everything that goes into making the act happen.

What drove the evolution of your production style on Pieces In Space?

My process is fluid. I don’t sit and think, ‘I want to make this kind of song.’ I played around with different drum sounds. I love synths, so I doubled down. The biggest evolution was in the live instrumentation. I was inspired by Kendrick Lamar’s To Pimp A Butterfly, and the way it integrates live instrumentation.

She tweeted, ‘I’m going to be doing features,’ so I found her information and messaged her on Facebook. Nobody responded, so I found an old email. I reached out, attached “1080p,” and asked if she would do a remix. She produced this really thoughtful and personal verse. I melted.

What type of art is inspiring you these days?

Therapy was this album’s inspiration. Being able to have candid conversations, finally unpacking and understanding what I have always felt, what that means—that opened up possibilities for me. That’s why the album varies so much in what it discusses, because I was finally ready to talk about those things.

African identity has always been weird for me, because I always felt like a ‘Bad African Kid.’ I never engaged with it explicitly. On this album, I inserted pieces of it in an intentional, personal way. That’s the result of having conversations with other ‘Bad African Kids’ and realizing that not knowing all the tradition I’m ‘supposed’ to know doesn’t mean that I can’t engage with it thoughtfully. I’m not saying it didn’t create awkwardness with family—it definitely did—and there’s still the specter of privacy as the default. I’m willing to take that awkwardness, because now I can be a whole person.

Open Mike Eagle is the artist that has informed this album the most. I was searching for my voice. From project to project, I felt it was fluctuating. I asked myself, ‘How can I have Open Mike Eagle’s clarity?’ You always know that it’s him in his songs. I didn’t care about the Meek Mill ghostwriting controversy, but if I learned that Mike Eagle had a ghostwriter, I would be devastated! I feel like I’m having a conversation with him when I’m listening to his music. That’s what I want my music to do—make people say, ‘I’m talking to Sammus.’

You mention egusi soup on the song “Childhood,” but I’m curious about who makes the best jollof rice.

[Laughs] I have had so many different kinds of jollof rice! This is the ‘tough question’ that I wasn’t anticipating. Just for the sake of keeping things all good in my family, I will say my mom makes the best jollof.