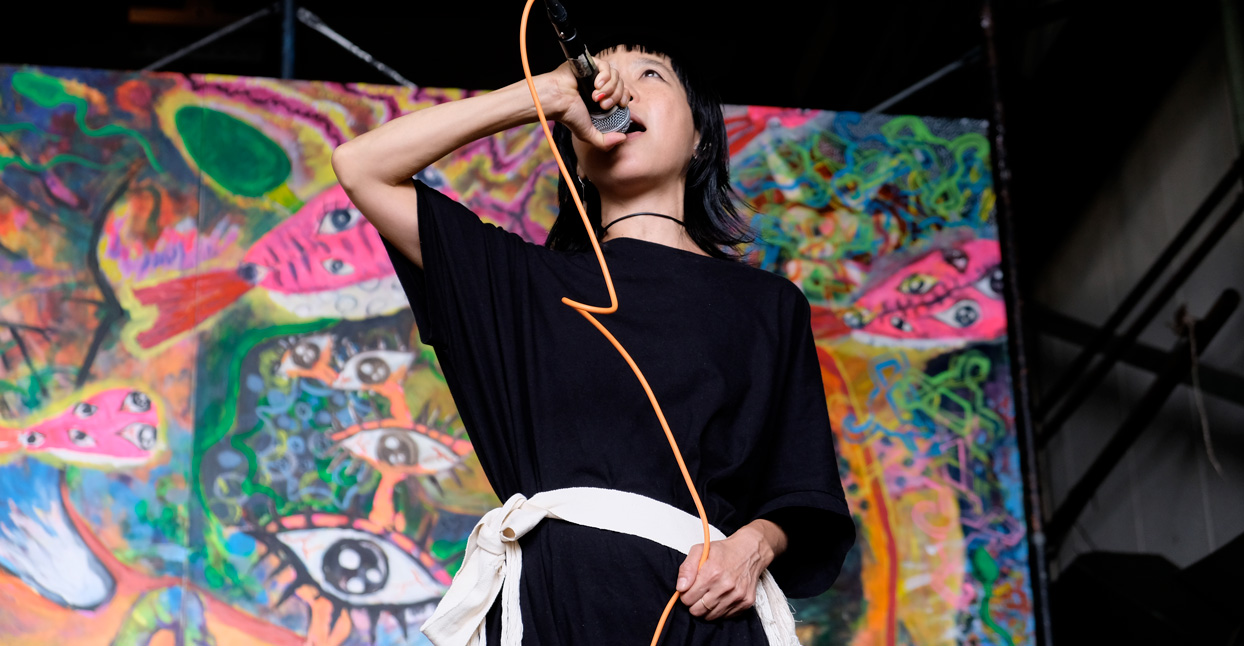 YoshimiO’s manic energy has been a force to be reckoned with for three decades now. With each new project, she expands the vocabulary of both psychedelia and noise music, turning heads in her native Japan and beyond. She’s turned up on dozens of projects over the course of her career; most famously, she’s played drums for legendary noise outfit Boredoms. But she’s also led the all-female experimental rock outfit OOIOO since 1997, and participated in Kim Gordon and Julie Cafritz’s mid-‘90s supergroup, Free Kitten. Her latest project is SAB SE PURANI BAB, the debut album by a quartet she leads called SAICOBAB—although the project has actually existed in some form or other for years now.

“I’m not sure, but it started when I first joined in with [sitar player] Daikiti’s PSYCHOBABA to do some improv vocals,” explains YoshimiO. “We were called PSYCHOBABA back then. To celebrate my officially joining the band, we changed the name to SAICOBABA. The meaning changed from a crazy uncle to the most ancient grandma.”

The SAICOBABA iteration (before the “a” at the end got dropped) emerged during the recording of a YoshimiO solo record titled Yunnan Colorfree, for which the outfit, including sitar player Daikiti (aka Yoshida Daikichi), recorded a cover of Sonic Youth’s “Death Valley ‘69” featuring Kim Gordon’s vocals. As a trio of YoshimiO and Daikiti, along with a Japanese tabla player (who was taught by Hindustani musical legend Zakir Hussain), SAICOBABA began performing improvisational gigs of Indian classical music, with YoshimiO adding free-form vocals.

“Bab started as a duo of Daikiti and me improvising by reading between lines in the air—miles away from Indian classical music,” YoshimiO explains. “We sometimes invited guests to form a trio. I played the piano and Daikiti always played the sitar. Our guests included Jim O’Rourke.”

Fast forward to 2017, where the Thrill Jockey-released SAB SE PURANI BAB stands as a potent force of ultra high-energy performance, technical virtuosity, and psychedelic mood. It’s shed the slower acid trip trappings of the group’s early jams, and the interplay within the group is now a Mahavishnu Orchestra-esque web of bristling energy. Daikiti’s sitar and YoshimiO’s voice criss-cross with the razor sharp double bass of jazz player Akita Goldman, while a twitching tambourine played by percussionist Hama traces out elaborate rhythms. For all its punk energy, psychedelic Japanese color, and jazz fusion, the most distinguishable influence over SAICOBAB remains Indian classical music.

“The classical music of Japan is very similar to that of India,” says YoshimiO. “They both have decorative melodies containing minor tones, called yuli in Japan and mindo in India. The rhythms of both types use odd numbers. Another similarity lies in the concept of time and space as nothingness and the void, called kali in India and ma in Japan.”

The relationship between philosophy and music across Asia often seems more literal than in the West—and it’s mostly down to numbers. Numbers are prescribed with countless meanings, and SAICOBAB nimbly deploys them to create a whirlwind of seven dense, breakneck pieces on SAB SE PURANI BAB.

“There are countless practices related to [numbers],” says YoshimiO. “Japanese music uses odd-numbered rhythms—1, 3, 5, 7, 9. Odd numbers are categorized under yang in the principle of yin and yang.”

Similarly, there’s also the 5:7 ratio (called “hakuginhi”) which YoshimiO says was used in the construction of the Hōryū-ji temple in Ikaruga, Japan some 1,300 years ago, and remains in use within traditional Japanese rooms to this day, as well as in music and poetry. The resulting rhythms command a striking presence, a sharp contrast with the familiar safety of 4/4. SAICOBAB unleash discomforting bars of 5 and 7 beats, shuffled into meticulously chaotic song structures, such as the red raw screech of “aMn nMn.”

Besides its compositional depth and complexity, SAICOBAB’s debut features some of the highest energy performances anywhere in YoshimiO’s discography. Recorded at home, there’s a sense of spontaneity and intimacy that cements the album’s strangely psychedelic power. Nowhere is it more striking than Akita Goldman’s amplified double bass playing—shoved front and center, anchoring the three wilder cards in the outfit—in the same way Charlie Haden’s legendary double bass work did for Ornette Coleman. YoshimiO reportedly leapt around the room while recording her vocals, spontaneously adding effects via a Kaoss pad while shifting fluidly between pre-written lyrics and improvised gibberish.

“It’s not such a big deal to me whether a song has lyrics or not,” says YoshimiO. “It would be more interesting for listeners to read the lines between the words I utter and maybe catch a glimpse of what I mean. I sing as though I’m reciting a prayer; by paying careful attention to every single word to avoid drowning in the sounds.”

Considering the slim lineup of four acoustic instruments (plus a handful of spontaneously dabbed sound effects), it’s surprising how tough it is not to drown in the sounds. SAICOBAB’s energy and complexity make it the kind of sensory onslaught one would normally associate with a larger band, or fully plugged-in noise outfit. There aren’t many experiences I can cite, save perhaps John McLaughlin and L. Shankar’s 1970s “world fusion” project Shakti, which wove similarly breakneck guitar and violin lines into Indian rhythms and scales. This concept of cultural fusion can be rocky territory, too—where exactly does the boundary line between receiving inspiration from and stealing from foreign cultures lie?

“Stealing from another culture is, for example, someone buying a sitar in India during a sightseeing trip and then calling themselves a raga master,” suggests YoshimiO. “Or coming to Japan, buying a karate uniform and learning the kata online. [It] can simply be described as that person being a ‘tourist.’ Taking inspiration from another culture means having a connection to the origin, transcending time and space.

“At the center of every Shinto shrine is a mirror. This mirror embodies the concept that, in contrast with monotheism, all things in nature in Japan are gods.The Japanese word for mirror is kagami. When the second syllable of this word—ga—is removed, it becomes kami. The word ga refers to the self—the subject. And when that is removed, you have kami—the gods. You’re left with nature and the entire universe.