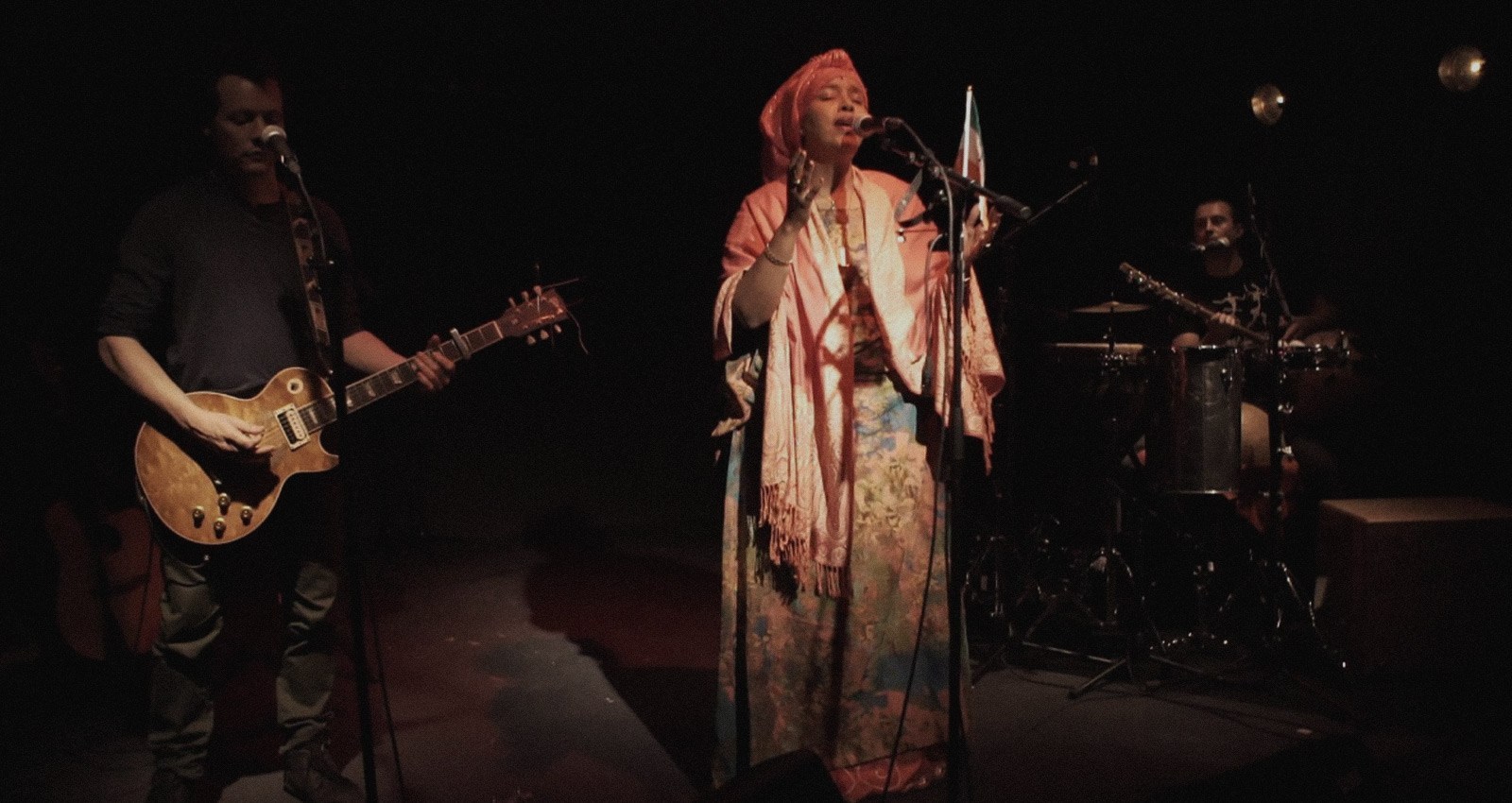 “My dream was to create a place where my people could come together, play, sing, laugh, and be happy,” says vocalist Sahra Halgan, the founder of Hiddo Dhowr, Somaliland’s first music venue since the collapse of a dictatorship in the early ’90s. “It’s a place where they can learn about their culture and be proud of it.” A proud Somalilander, Sahra exudes strength and determination. As a woman, a musician, former refugee, and creative entrepreneur in Somaliland, she’s had to overcome her fair share of challenges. Yet she continues in her mission to promote Somaliland’s culture. “Many people don’t know that Somaliland exists,” she says. “Even young people here are not aware of our culture. They don’t know about all the rich things that we have.” With the Sahra Halgan Trio, the group she founded as a refugee in Lyon, France, Halgan has toured the world—raising Somailand’s flag at every opportunity. “I would love the world to know that I am a Somalilander,” she says. “To know how rich we are in terms of culture, language, music, and traditions.”

A former British protectorate, Somaliland—a territory to the north of Somalia, close to Djibouti—  existed as a sovereign entity for only five days after independence in 1960 before joining southern Somalia, which had also just gained independence from Italy. Together, they formed the new Somali Republic, which was governed for nine years by an unpopular government put in place by the Italians.  In 1969, General Mohamed Siad Barre led a military coup and took power. Despite his authoritarian rule, Barre invested in the arts, and the music scene flourished. Sporting the latest fashion— afros and bell bottom trousers, sequined jackets and platform shoes— Somalis and tourists danced at trendy beachfront clubs, where bands entertained with a unique blend of funk, reggae, afrobeat, and traditional Somali melodies and rhythms.

Analog Africa’s Mogadisco – Dancing Mogadishu (Somalia 1972​-​1991) is only the latest in a series of reissues and compilations to capture the exuberance and optimism of the Golden Era, those years between 1970 and the late 1980s. The compilation, for which label founder Samy Ben Redjeb spent three weeks rummaging through reels of old tapes in Mogadishu, includes the sounds that defined an era: Dur Dur’s mix of funk, disco, and traditional Saar music, delivered through hypnotic organ riffs and Sahra Dawo’s soaring vocals; Iftin Band’s spacey synths and spaghetti-western-like guitars; Omar Shooli’s reggae bounce; and Bakaka Band’s organ-led, funk jams.

As outlined in the liner notes for the compilation Sweet As Broken Dates, Hargeisa had traditionally been the cultural epicenter of the Somali world, and was known as the “hoyga suugaanta,” the home of Somali music; gradually, attention shifted to the more cosmopolitan Mogadishu, with its palm fringed beaches and leafy boulevards. Still, although more conservative, Hargeisa maintained its own lively arts and culture scene.

“Before the civil war, Hargeisa was a very beautiful and peaceful city” recalls Sahra. “We had a theater, we had music concerts, people went out dancing and in the evenings we would uncover and style our hair.”

But things were soon to change: by the late 1980’s, an economic downturn plunged Somalia into crisis, and the regime became more repressive. Musicians fled, and the Somali National Movement (SNM) in Somaliland took up arms against Barre and fought for secession. Sahra joined the SNM, and worked as a self-taught nurse alongside the rebels who were hiding in the scrubby hills outside the city. When there was no medicine, she would soothe the injured with her voice. “People were taking part and contributing whatever they could to the war, and the only thing I could contribute was to sing.” Barre responded to the secessionist movement with a brutal bombing campaign, reducing the city to rubble.

Sahra fled to Djibouti and then France, where she would remain for 24 years. “When I left my country I was well-known, I was a respected person,” she says. “But when I went to France, I was just another African person walking the streets.” She took up a series of small jobs, but never gave up on music: “Music is in me, it is in our culture. Without music I cannot live.”

Waa Dardaaran, the Trio’s new album—released on Buda Music, the French label known for bringing the Ethiopiques series to the world—is louder and bolder, capturing the energy of Hiddo Dhowr’s live shows. With her unique vocal style, Sahra sings mostly about love, gratitude, and rebuilding her nation, using poetry typical of the Somali language. Her husband, a poet, wrote the lyrics to “Dardaaran” and “Hiddo.” Each member of the Trio brings their own distinctive background into the music: Krol, who has spent time in Bamako studying Malian percussions, uses his set of hand drums to drive tracks such as “Dhesha Dheshu” and “Caaqil,” while Salètes’ distorted guitars and hypnotic riffs give the record a solid rock backbone. A new addition to the group, keyboard player Graham Mushnik, injects some of that Golden Era psychedelia into the record. “We bring our own identity to the music, but I think we respect the meaning and the melodies of Somali music” says Salètes.

Sahra moved back to Somaliland in 2012 with the goal of opening a space where Somalilanders could learn about their culture. The small country declared its independence in 1991, and has its own government, police force, and currency, but is still not recognized by the international community. Despite enjoying peace and stability, much has changed in Somaliland. “Before the war, culture is what brought people together,” she says. “But after the war there was no music, no theatre.”

Although some religious leaders threatened her when she opened Hiddo Dhowr, the venue has now become the center of Hargeisa’s burgeoning music and cultural scene. More venues have popped up around the city, and organizations such as the Red Sea Cultural Center are working to preserve and promote Somaliland’s culture.

But Sahra’s job is not done. With her usual tenacity, she continues to campaign for Somaliland’s international recognition, and to promote democracy and human rights within the country. In the song “Dardaaran,” which gives the album its name, she tells the president—who she knows from her days with the SNM, where he was a pilot—to remember that the power is not his alone, but of the people. “If he doesn’t work for all the people, the people can take back that power,” she says. “It’s my warning to him.”